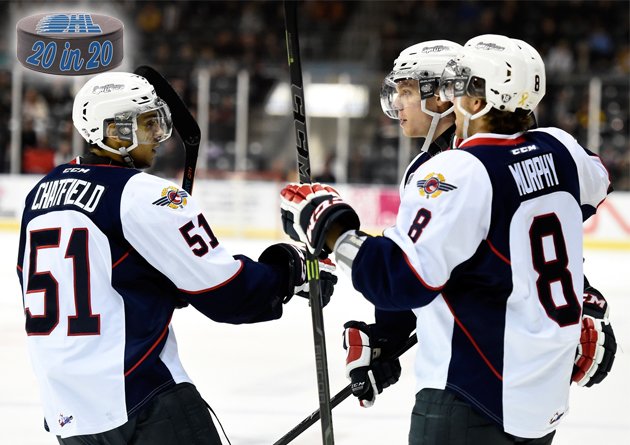 The 2014-15 Windsor Spitfires entered the month of February in a three-way dog fight for the eighth and final playoff spot in the Western Conference.

Rather than a much anticipated battle to the bitter end between the Spits, the Saginaw Spirit and the Plymouth Whalers, Windsor would finish nine points out of postseason contention to miss the playoffs for the second time in three seasons.

Now entering his 10th season as general manager of the Windsor Spitfires with back-to-back MasterCard Memorial Cup titles to his credit, Warren Rychel is quick to note that fans can expect a much improved squad coming out of training camp as some key additions, paired with a year of learning for some of the club’s developing young talent will prove valuable.

“We’re a much better team than we were when the final buzzer sounded in March,” he said. “We’ve added a Memorial Cup Champion in Bradley Latour, a second round NHL draft pick and very exciting player in Christian Fischer and we’re looking forward to seeing how some of our young players will progress with more OHL experience under their belt. Guys like Liam Murray, Andrew Burns and Logan Stanley, who is bigger and stronger after a summer of hard work, can really help us defensively.”

The Spitfires also nabbed a pair of promising young prospects in the 2015 OHL Priority Selection.

“We’ve been fortunate enough to bring in second overall pick Gabe Vilardi and goaltender Michael DiPietro who have been recognized by Hockey Canada as being two of the premier 16 year-old players in the country at their position,” Rychel added. “These are both guys that we can build around in the years to come.”

In the same boat as several other OHL teams, the Spitfires have had to deal with their share of change this summer. President and head coach Bob Boughner will join former OHL coaches Peter DeBoer and Steve Spott behind the bench with the San Jose Sharks while longtime assistant coach Bob Jones has been named the head coach of the Oshawa Generals.

Never one to shy away from the corners during his 14-year pro hockey career, rugged former defenceman Rocky Thompson, most recently an assistant coach with the Edmonton Oilers, has been brought in to carry on the tradition of coaching Windsor’s hard-hitting brand. Former Sarnia Sting bench boss Trevor Letowski slides in as associate coach.

“Rocky is very well prepared and has been in hockey for a long time, having coached in the NHL, the AHL and the WHL,” said Rychel of the new addition. “We’re going to be a high tempo team, one that competes and makes the opposition earn every break they get. It’s going to be interesting through training camp and into the preseason. Trevor and Rocky are both new to the organization – they don’t know the players and the players don’t know them – so first impressions are going to be important. We want to come out of the gate quick this season.”

Much of that early season success may hinge upon the contributions of big draft eligible centreman Logan Brown, who, along with winger Luke Kirwan, 2014 first round pick Logan Stanley and 2015 CHL Import Draft selection Mikhail Sergachev, will undoubtedly make the WFCU Centre a hub of scouting activity throughout the season.

A capable skater at 6’6” and 220Ibs., Brown gives the Spitfires the stability they need down the middle in all situations.

“He’s a big horse for us,” said Rychel of Brown who scored 17 goals and added 26 assists for 43 points as a 16 year-old rookie last season. “He had a real good year last year. We almost played him too much and put him in a lot of tough situations. He’s mature, he’s in good shape and we know we’ve got a really good player in him.”

Joining Brown up front is underrated sparkplug Cristiano DiGiacinto who had 45 points (21-24—45) in 63 games last season. The Tampa Bay Lightning prospect is described as a “junk yard dog” who serves as a “glue guy” in the dressing room by Rychel.

While the Spitfires will lean on Brown, DiGiacinto, Kirwan and Arizona Coyotes prospect Christian Fischer for offensive output this season, their biggest producer coming into the 2015-16 campaign is a defenceman.

An effortless skater with a rapid release from the blueline, overage defenceman Trevor Murphy returns to the Spitfires for a fifth OHL season. The Windsor native led the team in scoring last year with 24 goals, 39 assists and 63 points, 26 of which came on the man advantage.

Murphy, who attended development camp with the Nashville Predators this past summer, will be a go-to guy in Windsor as he tries to earn an NHL contract.

“He’s the guy. A large portion of our offense runs through him,” Rychel noted. “He’s one of the highest scoring returning defencemen in the league this year who has a great shot. He can be a real game changer.”

Murphy leads a group of defencemen that also includes the imposing duo of veteran captain Patrick Sanvido (6’5”, 229Ibs.) and sophomore Logan Stanley (6’6”, 210Ibs.). Both Andrew Burns and Liam Murray enter their third season in the league while 19 year-old Jalen Chatfield and Russian newcomer Mikhail Sergachev will also be relied upon to help improve Windsor’s penalty kill that struggled throughout much of last season.

Opportunity knocks for goaltenders Brendan Johnston and rookie Michael DiPietro, who, as it stands right now, will battle for playing time out of the gate. Johnston enters the season with 38 games of OHL experience while DiPietro backstopped the Team Ontario Under-16 team to gold at the Canada Winter Games in February before being selected by the Spitfires in the second round of the 2015 OHL Priority Selection.

While the goaltending situation remains fluid, Rychel says the Spitfires will ultimately need regular contributions from their veterans if they hope to be competitive this season.

“We’re gradually working to improve our team, but we’ll need more consistency from our veterans this season,” he said. “We have some very capable players on our roster and we’ll need them to be at their best every night. This is a very competitive league and we can’t afford to take nights off.”

The only OHL team with more points on the road than at home last season, the Spitfires will put their skills behind enemy lines to the test to start the 2015-16 season, with eight of their first 12 games coming away from home.

WATCH AND LISTEN: Spitfires GM Warren Rychel discusses some of the 2015-16 Players to Watch.