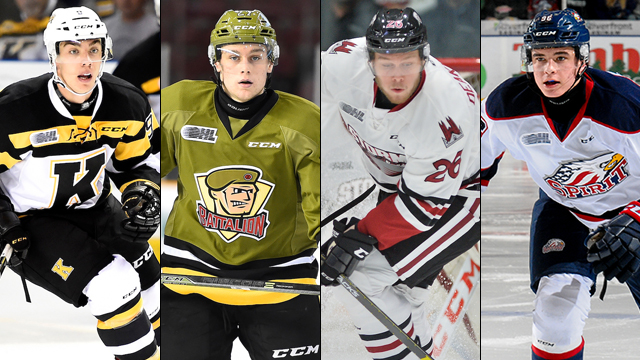 Toronto, ON – The Ontario Hockey League today announced the OHL Academic Players of the Month for December 2016, including forwards Nathan Dunkley of the Kingston Frontenacs, Adam McMaster of the North Bay Battalion, Nick Deakin-Poot of the Guelph Storm and Damien Giroux of the Saginaw Spirit.

East Division: Sixteen year-old rookie forward Nathan Dunkley of the Kingston Frontenacs is the East Division Academic Player of the Month for December after achieving an overall average of 78% over four university level courses at Holy Cross Catholic Secondary School. Dunkley is currently studying Functions, Accounting, World Religions and High Performance Athletics and has achieved successful results in all four streams. “Nathan demonstrates an exemplary attitude, work ethic and commitment to his studies,” said Frontenacs academic advisor Kim Hulton. “He’s an excellent role model and his commitment to success is evident in both his academic achievements and his on-ice performance. Dunkley has 14 points (3-11–14) over 31 games this season and represented Canada Red at the 2016 World Under-17 Hockey Challenge. The Campbellford, Ont. native was Kingston’s first round (17th overall) pick in the 2016 OHL Priority Selection.

Central Division: Sixteen year-old rookie Adam McMaster of the North Bay Battalion is the Central Division Academic Player of the Month for December. The Beamsville, Ont. native is currently achieving high grades in Grade 11 Marketing, American History, English and Co-op courses at Chippewa Secondary School. “Adam demonstrates a thorough understanding of course materials and makes connections easily,” said Battalion academic advisor Judy Smith. “He was able to manage his school work effectively and independently while competing at the World Under-17 Hockey Challenge in Sault Ste. Marie earlier this season.” McMaster has 11 points (2-9–11) over 29 games this season after being North Bay’s first round (13th overall) pick in the 2016 OHL Priority Selection. He was the 2016 OMHA SCTA Minor Midget Player of the Year last season.

Midwest Division: Guelph Storm sophomore forward Nick Deakin-Poot is the Midwest Division Academic Player of the Month for December. The 17 year-old native of Georgetown, Ont. is currently studying university level English, Kinesiology and Religion courses at Our Lady of Lourdes Catholic Secondary School and has maintained an 87% average in his studies. “Nick is a conscientious and disciplined student with a great attitude,” said Storm academic advisor Coleen Driscoll. “His teachers have been very complimentary of his commitment to his studies as well as his positive outlook.” Deakin-Poot has a goal and four assists over 24 games this season. He was Guelph’s third round (54th overall) pick in the 2015 OHL Priority Selection.

West Division: Sixteen year-old rookie forward Damien Giroux of the Saginaw Spirit is the Midwest Division Academic Player of the Month for December. The Hanmer, Ont. native is an ‘A’ student over Grade 11 International Baccalaureate Language and Literature, Biology, Algebra and French courses, drawing the praise of his teachers in the process. “Damien is an outgoing and enthusiastic student with an amazing personality,” said Spirit academic advisor Pamela Moretuzzo. “He incorporates his terrific sense of humor into his classes. I appreciate and embrace his natural ability to make those around him laugh and have fun, while focusing on his many scholastic, athletic and community service commitments.” Giroux, who was Saginaw’s third round (44th overall) pick in the 2016 OHL Priority Selection, has 13 points (6-7–13) over 27 games as a rookie this season.