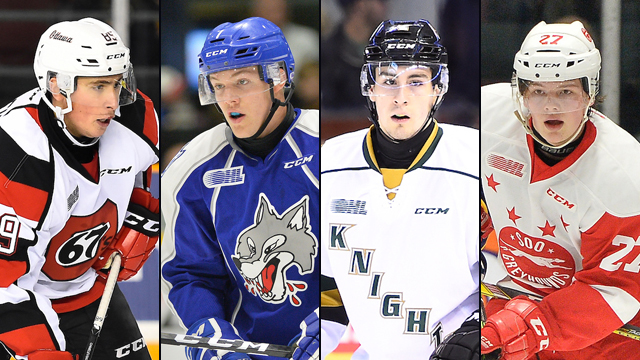 Toronto, ON – The Ontario Hockey League today announced the OHL Academic Players of the Month for February 2017, including Sasha Chmelevski of the Ottawa 67’s, Reagan O’Grady of the Sudbury Wolves, Evan Bouchard of the London Knights and Barrett Hayton of the Sault Ste. Marie Greyhounds.

East Division: For the second time in his OHL career, Ottawa 67’s forward Sasha Chmelevski has earned Academic Player of the Month honours, claiming East Division recognition for the month of February. A native of Northville, Mich., Chmelevski holds a 96% average in Grade 12 Statistics and Probability, British Literature, Anatomy and Physiology, Marketing and Psychology courses. “Sasha approaches his studies as a mature, disciplined, and self-motivated student, who works hard to balance the demands of school and hockey,” said 67’s Academic Advisor Eileen Duffin. The 2017 NHL Draft prospect sits fourth in OHL scoring with 19 goals, 21 assists and 40 points over 49 games. He represented Team Orr in the 2017 Sherwin-Williams CHL/NHL Top Prospects Game, scoring a goal in Quebec City and also represented the United States at the 2016 Ivan Hlinka Memorial Tournament this past summer, recording four goals and five assists in four contests. Chmelevski was Sarnia’s first round (10th overall) pick in the 2015 OHL Priority Selection.

Central Division: Third-year defenceman Reagan O’Grady of the Sudbury Wolves is the OHL Central Division Academic Player of the Month for February. The 18-year-old Lindsay, Ont. native holds an 81% average in Grade 12 University level courses at Lasalle Secondary School and is set to begin University in September. In 56 games this season, the draft eligible blueliner has four goals, 10 assists and 14 points. O’Grady was originally Kingston’s first round (15th overall) pick in the 2014 OHL Priority Selection from the Toronto Marlboros Minor Midgets.

Midwest Division: Sophomore defenceman Evan Bouchard of the London Knights is the OHL Midwest Division Academic Player of the Month for February. The Oakville, Ont. native is maintaining a 93% average in Grade 12 University level studies at Blyth Academy. “Evan’s success this year can be credited to his positive attitude and work ethic,” said Knights Academic Advisor Trish Hurley. “He exemplifies the OHL policy of ‘providing the best of both worlds’ with regard to academics and hockey.” Bouchard is the Sports Representative on Blyth Academy’s Student Council and is involved with clubs within the school community. He has helped organize multiple fundraisers since the start of the school year including an initiative for Sick Kids Hospital. Bouchard has nine goals, 25 assists and 34 points to go with a plus/minus rating of plus-29 in 59 contests this season. He was London’s first round (17th overall) pick in the 2015 OHL Priority Selection and won’t be eligible for the NHL Draft until 2018.

West Division: Sault Ste. Marie Greyhounds rookie Barrett Hayton is the OHL West Division Academic Player of the Month. The Peterborough, Ont. native has an overall average of 85% in Grade 11 University level Mathematics, English, Science and Physical Education programs at Superior Heights Secondary School. “Barrett is a great example of how a student-athlete with the Greyhounds can achieve success both on the ice and in the classroom,” said Greyhounds general manager Kyle Raftis. Hayton has seven goals, 13 assists and 20 points in 54 games with the Hounds this season and represented Team Canada White at the 2016 World Under-17 Hockey Challenge, recording a goal and an assist in six games. He was Sault Ste. Marie’s first round (9th overall) pick in the 2016 OHL Priority Selection from the Toronto Red Wings Minor Midgets.