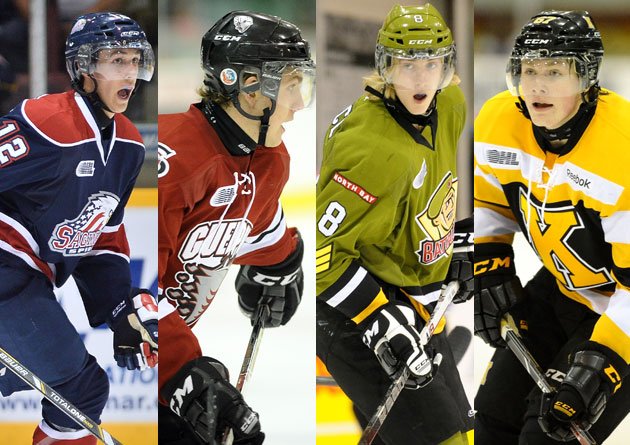 Toronto, ON – The Ontario Hockey League today announced the OHL Academic Players of the Month for February, 2014, including Michael Holmes of the Saginaw Spirit, Adam Craievich of the Guelph Storm, Riley Bruce of the North Bay Battalion, and Lawson Crouse of the Kingston Frontenacs.

West Division: The West Division Academic Player of the Month for February is the Saginaw Spirit’s Michael Holmes. Holmes, a 17-year-old rookie from Barrie, ON, was  Saginaw’s 2nd round selection in 2013. While attending Heritage High School Holmes has been able to achieve great success in the classroom. While maintaining grades in the high 70’s on a tough course load which includes University prep English and Physics, Holmes has continually demonstrated that he has both the tools on the ice which made him the 28th overall pick in the OHL Priority Selection as well as in the classroom. The Saginaw Spirit would like to congratulate Michael on all his success so far and continued success in the future.

Midwest Division: The Midwest Division Academic Player of the Month for February is the Guelph Storms’ Adam Craievich. Craievich, a 16-year-old rookie from Sarnia, ON, is an extremely disciplined, self motivated and conscientious student. His commitment to his academic studies was evident with the demanding course load he carried earning a 91% average in five University prep courses. His teachers have described him as a “very focused student with strong leadership skills”. His high standards of excellence is a direct reflection of his positive work ethic. The Guelph Storm would like to congratulate Adam on his superb efforts in the classroom and wishing him continued success in second semester.

Central Division: The Central Division Academic Player of the Month for February is North Bay Battalion Defenseman Riley Bruce.  Bruce, a 16-year-old rookie from Carp, ON, has maintained a high honours average during his time at Chippewa Secondary School and  throughout his high school career. This past semester he excelled in his accounting and marketing classes where he showed great insight into solving case studies and analyzing business problems. He demonstrates a strong work ethic and critical thinking skills in his classes and is conscientious about staying on top of his assignments despite his busy travel schedule.

East Division: The East Division Academic Player of the Month for February is Kingston Frontenacs’ rookie Lawson Crouse. Crouse, a 16-year-old Mt. Brydges, ON, native was a first round draft pick for the Frontenacs last season. He has certainly lived up to his billing, having been selected as a member of Team Ontario for the World Under-17 Hockey challenge. Academically, Lawson attends Holy Cross CSS. He is enrolled in challenging courses and is committed to achieving high academic success. Lawson has proven himself successful in his commitment to academics and in his hockey pursuits.