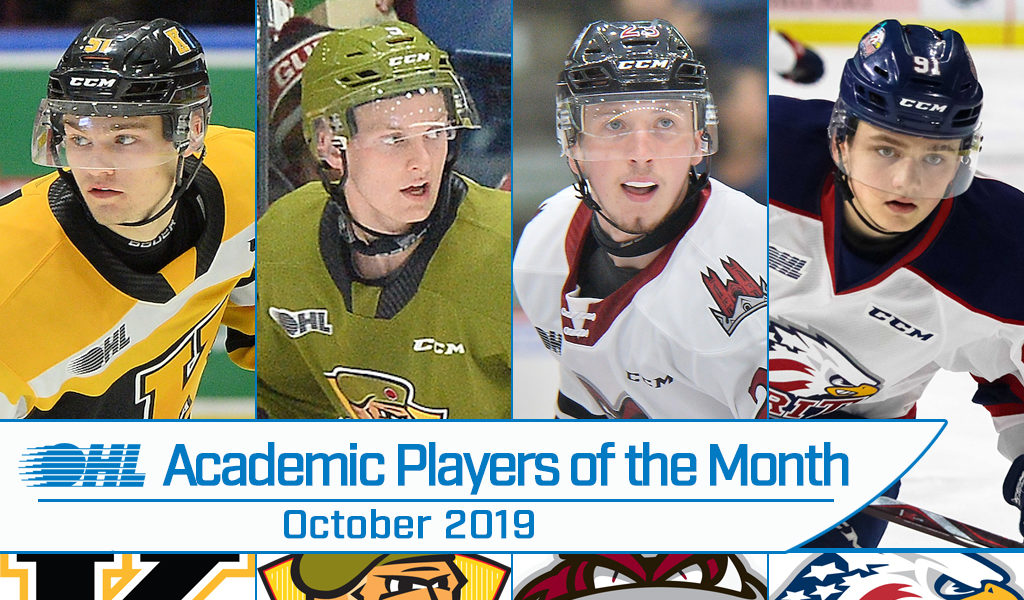 Toronto, Ont. – The Ontario Hockey League today announced the OHL Academic Players of the Month for October 2019, including Shane Wright of the Kingston Frontenacs, Pacey Schlueting of the North Bay Battalion, Zack Terry of the Guelph Storm and Cole Perfetti of the Saginaw Spirit.

East Division: Kingston Frontenacs rookie and 2019 OHL Priority Selection first overall pick Shane Wright is the OHL East Division Academic Player of the Month for October. The 15-year-old from Burlington, Ont. is off to a great start in his Grade 10 studies at Holy Cross Catholic Secondary School, achieving a 95% average in his academic math, business, computer technology and high performance athlete courses.

“Shane’s exceptional work ethic and dedication to his academic studies have been every apparent right from the first week of school,” said Frontenacs academic advisor Kim Hulton. “The staff at Holy Cross are exceptionally impressed with his maturity, commitment to his studies and his ability to act as a role model in his new school.”

On the ice, the exceptional status rookie has 11 points (5-6–11) through his first 14 contests, leading OHL rookies with 48 shots on goal.  He’ll be representing Canada Black at the 2019 World Under-17 Hockey Challenge starting this weekend in Medicine Hat, Alta. and Swift Current, Sask. He’s a graduate of the Don Mills Flyers Minor Midget program.

Central Division: North Bay Battalion defenceman Pacey Schlueting is the OHL Central Division Academic Player of the Month. The sophomore defenceman owns an 84% average in Grade 12 chemistry, philosophy and functions courses at Chippewa Secondary School. This marks the second time Schlueting has received the honour after doing so in February 2019.

“Pacey is very self-directed and has shown himself to be a very motivated learner,” said Battalion academic advisor Colleen Point.

The 17-year-old hometown product of North Bay, Ont. has three assists over 14 games in his second OHL season after suiting up in 60 regular season contests as a rookie. Schlueting was North Bay’s first round (9th overall) pick in the 2018 OHL Priority Selection from the North Bay Trappers Minor Midgets.

Midwest Division: Guelph Storm defenceman Zack Terry is the OHL Midwest Division Academic Player of the Month. The second-year blueliner and reigning Ivan Tennant Memorial Award winner as the OHL’s top academic secondary school student owns an A+ average in his Grade 12 studies at Our Lady of Lourdes Catholic High School, managing a course load that includes english, chemistry and advanced functions. This marks the second time Terry has received the honour after doing so in February 2019.

“Zack is the consummate student-athlete,” said Storm academic advisor Colleen Driscoll. He has continued to excel in the classroom maintaining his high academic standards as evidenced in his A+ average. His teachers describe him as hard working; conscientious; possessing great potential and skills. His strong academic achievement is a direct reflection of his strong work ethic and commitment to excellence.”

The 17-year-old Oakville, Ont. native has two assists through his first 12 games of the season after hoisting the Robertson Cup as an OHL champion with the Storm last spring. The 6-foot-2, 189Ib. defenceman was Guelph’s second round (36th overall) pick in the 2018 OHL Priority Selection from the Oakville Rangers Minor Midgets.

West Division: Saginaw Spirit forward and top 2020 NHL Draft prospect Cole Perfetti is the OHL West Division Academic Player of the Month for October. Perfetti owns an overall average of 95% in his Grade 12 studies at Heritage High School, learning about subjects such as algebra as well as elite athlete and leadership courses. This marks the second time Perfetti has received the honour after doing so in February 2019.

“Cole is an outstanding, conscientious individual with an excellent work ethic,” said Spirit academic advisor Pam Moretuzzo. “He welcomes academic and personal challenges and works diligently which is evident in his high achievements. Cole’s grade 11 average was 93% which included university-level and international baccalaureate courses. He is a very strong student and has assumed the role of peer tutor in numerous study sessions. He is well-liked and respected by his peers and adults alike and has proven himself to be a true leader in and out of school.”

After setting a Spirit franchise record with 37 goals as a rookie in 2018-19, Perfetti has continued his production, leading the team with 27 points (5-22–27) through 16 games this season. He’ll be representing Team OHL in next week’s CIBC Canada Russia Series. Perfetti was Saginaw’s first round (5th overall) pick in the 2018 OHL Priority Selection from the Vaughan Kings Minor Midgets.

Last season, the OHL Centrally Administered Scholarship Program facilitated scholarships for 340 OHL Alumni at 69 different academic institutions across North America with a total scholarship payment in excess of $3.2 million. Since the 2007-08 season, OHL Scholarship payments have totalled more than $25 million.