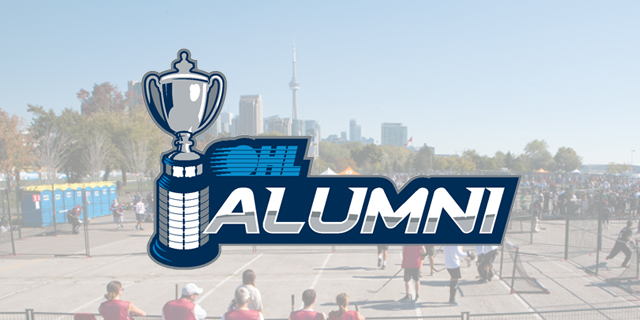 The OHL Alumni Association is joining forces with The Princess Margaret Cancer Foundation, striving to conquer cancer in our lifetime as they hit the street for a day of road hockey at the annual Road Hockey to Conquer Cancer event on October 1st.

The OHL Alumni Association’s 16-man roster has surpassed its $10,000 fundraising goal, having raised $13,777 as of Tuesday. All money raised will go towards cancer research, therapies and treatments that will ultimately save lives and provide a fighting chance to all those living with this devastating disease.

“The OHL Alumni Association truly believes we can make a difference in the lives of our alumni, respective communities and worthwhile causes if we work together and combine our effort, just as we once did as players in the OHL,” said Justin Robinson, Chairman of the OHL Alumni Association Board. “We are pleased to direct our combined energy in partnership with the Princess Margaret Cancer Foundation with a great opportunity for all of our Alumni to get involved and give back to a tremendous cause.”

THE ONTARIO HOCKEY LEAGUE ALUMNI ASSOCIATION IS JOINING THE FIGHT TO CONQUER CANCER https://t.co/EX6oMkGrNH Help join the fight with us!!!

The one-day road hockey fundraiser takes place at Woodbine Racetrack in Etobicoke as teams play a five game schedule in an event that has included more than 8,500 participants over its five year history. Last year, it set two world records and is now the largest road hockey fundraising event in the world.

As of Tuesday, former Kitchener Rangers forward Rob DeCiantis (1994-97) leads the fundraising charge, having received $1,750 in support. Belleville Bulls graduate and Mississauga Steelheads general manager James Boyd (1993-97) trails close behind having raised $1,055 towards the cause.

To support the OHL Alumni Association team in the Road Hockey to Conquer Cancer, click here to visit the team page and to make an online donation.

The OHL Alumni Association encourages new members to join their online internal network.  New users can register for a free online account where they will have the ability to stay up to date on upcoming association and league events, reconnect with old teammates, mentor a current player, and take advantage of all of the opportunities the vast network may provide.

The OHL and the Alumni Association also invites members to join the growing online community of OHL Alumni on LinkedIn.