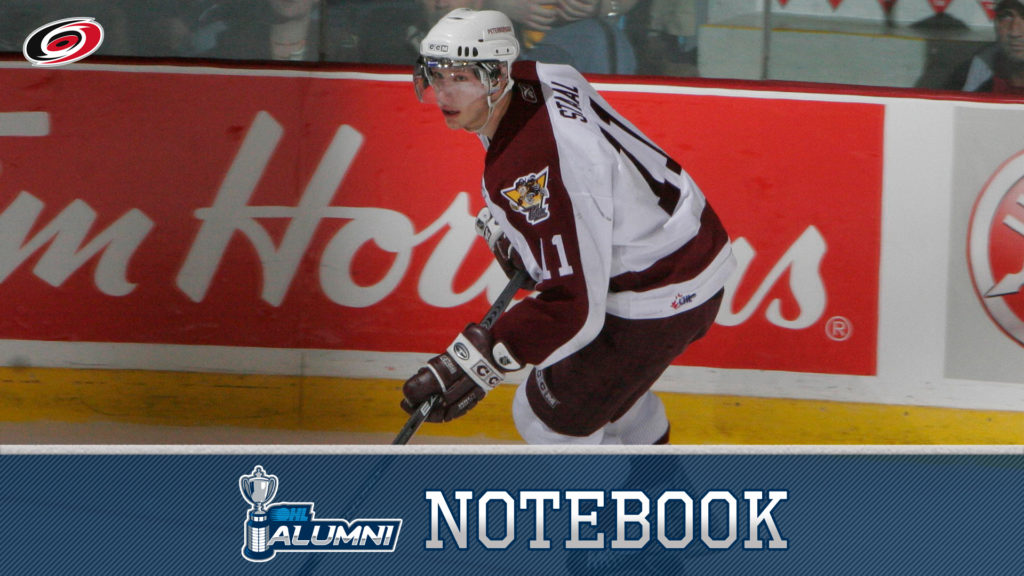 STAAL PLAYS 1000TH NHL GAME
Peterborough Petes graduate Jordan Staal is playing in his 1000th career NHL contest on Monday, becoming the second member of his family to do so, following in the footsteps of brother Eric. The 32-year-old native of Thunder Bay, Ont. wears the ‘C’ in Carolina and has 29 points (13-16–29) through 38 games this season. The former second overall pick of the 2006 NHL Draft has spent the past nine seasons in Carolina after breaking into the NHL with the Pittsburgh Penguins. Staal, who won an OHL championship with Peterborough in 2006, has recorded 566 points (238-328–566) in his NHL career and won a Stanley Cup with Pittsburgh in 2009. Jordan and Eric Staal are the only set of active brothers to each appear in at least 1000 career NHL games.

OHL GRADUATES ON THE MOVE AT NHL TRADE DEADLINE
A number of prominent past OHL names were involved in trades at the NHL’s deadline on Monday. Most notably, former two-time Memorial Cup champion Taylor Hall was dealt from the Buffalo Sabres to the Boston Bruins. Soo Greyhounds graduate Jeff Carter joined the Pittsburgh Penguins after 10 seasons with the Los Angeles Kings. Former Sudbury Wolves star Nick Foligno followed in the footsteps of his father Mike, joining the Toronto Maple Leafs in a trade from the Columbus Blue Jackets. Kingston Frontenacs alumnus Sam Bennett was dealt from the Calgary Flames to the Florida Panthers. For a complete rundown of NHL trades, visit nhl.com.

To one of the most clutch playoff performers in LA Kings history. A major influence on our Championship identity. You did it all, on and off the ice.

TAVARES REACHES 800 POINT MILESTONE
All-time leading OHL goal-scorer John Tavares recorded his 800th career NHL point on April 5th. The 30-year-old had a goal and an assist as the Leafs defeated the Calgary Flames 5-3. Tavares has registered 33 points (12-21–33) through 41 games this season, giving him a total of 802 career points (347-445–802) through 855 regular season games. The first overall pick of the 2009 NHL Draft, Tavares scored a record 215 goals over 247 career OHL regular season contests between Oshawa and London from 2005-09.

LANDESKOG RECORDS 500TH POINT
Former Kitchener Rangers captain Gabriel Landeskog reached the 500 point plateau on Sunday, recording a goal and two assists as the Colorado Avalanche took a 4-1 win in Anaheim. The Swedish winger has 40 points (16-24–40) through 39 games this season, contributing to his 500 points (214-286–500) over 672 career regular season games. Landeskog is the eighth player in Avalanche franchise history to reach the mark and just the second from the 2011 NHL Draft following Tampa Bay’s Nikita Kucherov.

BROWN SCORES IN EIGHTH CONSECUTIVE GAME
Ottawa Senators forward Connor Brown became just the second player in franchise to score a goal in eight consecutive games, joining Jason Spezza (2009-10) in accomplishing the feat. Brown found the back of the net on Monday as the Sens took on the Winnipeg Jets. The 27-year-old from Toronto has 13 goals, 10 assists and 23 points through 42 games this season. Originally a sixth round pick of the Toronto Maple Leafs in 2010, Brown played three seasons with the Erie Otters from 2011-14, leading the OHL with 128 points (45-83–128) in 2013-14.

CAMPBELL’S STREAK ENDS AT 11
Toronto Maple Leafs goaltender Jack Campbell was finally defeated on Monday as the Leafs fell to the Montreal Canadiens by a score of 4-2. Campbell’s franchise record-setting 11-game winning streak spanned from January 16th to April 10th, also setting a new NHL record for the longest such streak to start a season. The 29-year-old owns an 11-1 record with a 1.98 goals-against average and .930 save percentage in 12 games for the Maple Leafs this season. He played two OHL seasons between Sault Ste. Marie and Windsor from 2010-12.

Jack Campbell improved to 11-0-0 through his first 11 appearances and helped the @MapleLeafs extend the NHL's longest active point streak to 10 games (9-0-1). #NHLStats pic.twitter.com/xea4egkwIT

BUNTING SCORES FIRST CAREER HAT TRICK
Soo Greyhounds graduate Michael Bunting scored his first career NHL hat trick on April 5th as his Arizona Coyotes defeated the Los Angeles Kings 5-2. The 25-year-old from Scarborough, Ont. has six points (5-1–6) through seven games this season after logging 16 games with the AHL affiliate Tucson Roadrunners. A former fourth round pick of the Coyotes in 2014, Bunting was a ninth round pick of the Greyhounds before playing two seasons in Sault Ste. Marie from 2013-15.

The future is now. 😍 pic.twitter.com/jK3H0gQUfR

STUDENIC MAKES NHL DEBUT
Former Hamilton Bulldogs OHL champion Marian Studenic hit NHL ice for the first time on Sunday. The native of Holic, Slovakia suited up for the New Jersey Devils in a 5-2 loss to the Pittsburgh Penguins, making his NHL debut at the age of 22. A former fifth round pick of the Devils in 2017, Studenic spent much of the 2020-21 season on home soil with Bratislava Slovan of the Slovakian pro circuit before registering seven points (3-4–7) in 19 games with the AHL’s Binghamton Senators. Studenic hoisted the Robertson Cup with the Bulldogs in 2018.

Welcome to the big leagues! pic.twitter.com/pRByFEtcQ1

MIDDLETON STEPS INTO THE NHL
Former Saginaw Spirit captain Keaton Middleton made his NHL debut with the Colorado Avalanche on Friday. The 6-foot-6 rearguard from Stratford, Ont. got the call up after suiting up in 14 games for the AHL affiliate Colorado Eagles. Middleton, 23, played four seasons in Saginaw from 2014-18 and was a fourth round pick of the Toronto Maple Leafs in 2016.

HANDFUL OF OHL PRODUCTS MAKE AHL DEBUTS
A handful of OHL products made their debut on the AHL stage this past week including Soo Greyhounds teammates Joe Carroll (Belleville Senators) and Jacob LeGuerrier (Laval Rocket), Flint Firebirds defender Vladislav Kolyachonok (Syracuse Crunch) and Windsor Spitfires forward Curtis Douglas (Belleville Senators). Douglas, who scored in his debut, signed an AHL contract with Belleville following four OHL seasons. He had been a fourth round pick of the Dallas Stars in 2018.

UPDATE: The #BellevilleSens have signed Curtis Douglas to a standard AHL player contract.

Note: Our original announcement on April 10th incorrectly stated Douglas was signed to an Amateur Tryout.

With a goal in his debut, are we really surprised?https://t.co/rciZhGoZfg pic.twitter.com/mrFuZhcjoZ