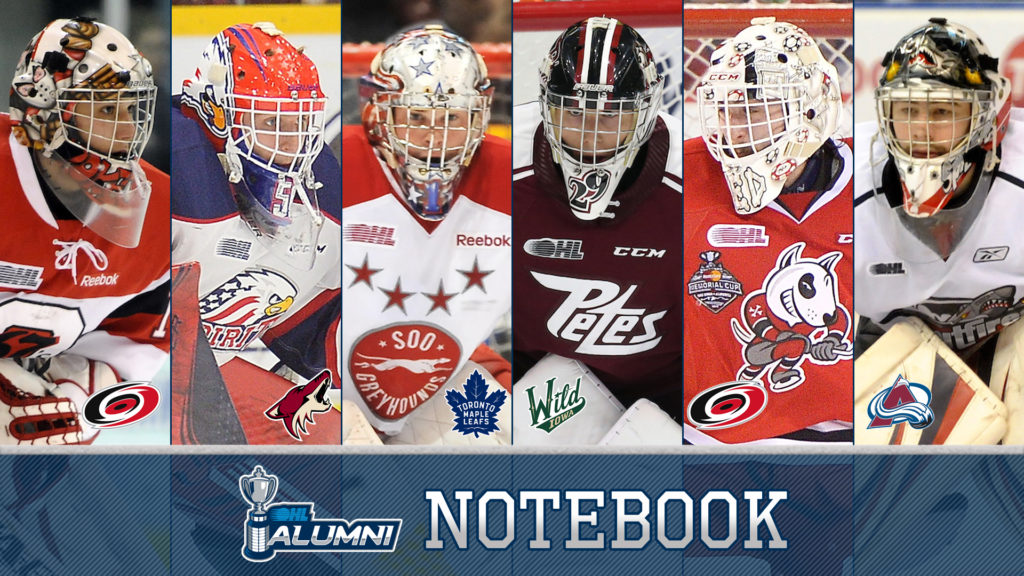 GIORDANO PICKS UP 500TH CAREER POINT
Owen Sound Attack graduate Mark Giordano became the fifth undrafted defenceman in NHL history to record 500 career points on Sunday. The Calgary Flames captain joined Al MacInnis and Gary Suter as the third defender in Flames franchise history to record 500 points in red and white. The 37-year-old Toronto, Ont. was never drafted to either the NHL or OHL. He played two seasons in Owen Sound from 2002-04.

HENRIQUE SUITS UP IN 700TH GAME
Former back-to-back Memorial Cup champion Adam Henrique played in his 700th career NHL game on Sunday. The pride of Burford, Ont. was in the lineup as the Anaheim Ducks fell to the Arizona Coyotes 3-2 in overtime. The 31-year-old has 16 points (10-6–16) through 35 games with Anaheim in this, his 11th NHL season. Henrique starred for the Windsor Spitfires from 2006-10, hoisting the Memorial Cup in both 2009 and 2010.

CHYCHRUN JUST SECOND COYOTES DEFENCEMAN WITH A HAT TRICK
Former first overall OHL Priority Selection choice Jakob Chychrun netted his first career NHL hat trick on Sunday, capping it off with the game winner in overtime as the Arizona Coyotes edged Anaheim 3-2. Chychrun is just the second defender in Coyotes history to score a hat trick, joining Ed Jovanovski who last did it in 2010. Chychrun moved into a tie with Edmonton’s Darnell Nurse for most goals by a defenceman in the NHL this season with a total of 12. He’s just the eight rearguard in NHL history to complete a hat trick in overtime. Chychrun played for the Sting from 2014-16 before being chosen 16th overall by Arizona in the 2016 NHL Draft.

Jakob Chychrun became the eighth defenseman in NHL history to complete a hat trick with an overtime goal. #NHLStats pic.twitter.com/mw3RZZYJwW

GRUBAUER EARNS WEST DIVISION HONOURS
Colorado Avalanche goaltender Philipp Grubauer is the NHL West Division Player of the Month for March. The 29-year-old played to an impressive 12-2-1 record, recording a 1.56 goals-against average, .933 save percentage and three shutouts. Grubauer became the fifth goaltender in NHL history to earn 12 wins in a calendar month. The native of Rosenheim, Germany now sits first in NHL wins (22), shutouts (5) and third in goals-against average (1.78). Grubauer played three OHL seasons between Belleville, Windsor and Kingston from 2008-11, winning a Memorial Cup with the Spitfires in 2010.

McDAVID NAMED NORTH DIVISION PLAYER OF THE MONTH
Edmonton Oilers star Connor McDavid earned NHL North Division Player of the Month honours after posting 23 points (7-16–23) in 14 March contests. All of McDavid’s points came during an 11-game trend from March 6-29, his second double-digit run of the campaign. The Newmarket, Ont. native scored a trio of game winners over the course of the month and leads the League with 63 points (21-42–63) in 37 contests this season. The former CHL Player of the Year racked up 285 points (97-188–285) over three seasons with the Erie Otters from 2012-15.

All of Connor McDavid’s points in March came during an 11-game point streak from March 6-29 to mark his second double-digit run of the season (also 10 GP from Jan. 20 – Feb. 8). https://t.co/D5ZQ4fdhUC #NHLStats pic.twitter.com/y7qfaqnf3n

CAMPBELL STAYS HOT WITH EIGHTH STRAIGHT WIN
Toronto Maple Leafs netminder Jack Campbell remains one of the hottest goaltenders in the NHL, earning an eighth consecutive win to start the season on Friday in Winnipeg. Campbell shut the door, stopping 31 of 32 to improve to 8-0 on the season with a 1.35 goals-against average and .951 save percentage. Campbell owns the second-longest winning streak by a goaltender in Maple Leafs franchise history, one win back of Felix Potvin (1993), Jacques Plante (1971) and John Ross Roach (1925). The 29-year-old from Port Huron, Mich. played two OHL seasons between Windsor and Sault Ste. Marie from 2010-12 and was a first round pick of the Dallas Stars in 2010.

Jack Campbell of the @MapleLeafs made 31 saves through 65 minutes and denied three shootout attempts to improve to 8-0-0 through eight appearances this season. #NHLStats pic.twitter.com/S2SlGWEPMY

MRAZEK RETURNS WITH SHUTOUT
Ottawa 67’s graduate Petr Mrazek returned to the Carolina Hurricanes crease for the first time since January 30th on Sunday, registering a 28-save shutout as the Canes defeated Dallas 1-0. Mrazek becomes the sixth goaltender in the NHL’s modern era to post a shutout in each of his first three wins of the season, becoming the first to do so since fellow OHL grad Michal Neuvirth in 2015-16. Injury has limited the 29-year-old Mrazek to just five games this season. The Ostrava, Czech Rep. native played three seasons in Ottawa from 2009-12 and was Detroit’s fifth round pick in 2010.

Petr Mrazek has more shutouts this season than 16 @NHL teams

PROSVETOV DEBUTS FOR ARIZONA
Former Saginaw Spirit goaltender Ivan Prosvetov made his NHL debut in a relief appearance for the Arizona Coyotes on March 31st. The 6-foot-5 netminder surrendered five goals on 28 shots as the Coyotes fell to the Colorado Avalanche 9-3. A 22-year-old product of Moscow, Russia, Prosvetov has played to a 5-3 mark with a 3.24 goals-against average in eight games with the AHL’s Tucson Roadrunners this season. He played one season in Saginaw, helping the Spirit win a 2019 West Division title while making their first-ever trip to the Western Conference Championship Series. He was Arizona’s fourth round pick in 2018.

Big 6-foot-5 former @SpiritHockey goaltender Ivan Prosvetov made his #NHL debut with the @ArizonaCoyotes on Wednesday at the age of 22. #OHLAlumni was a fourth round pick of the #Yotes in the 2018 #NHLDraft. pic.twitter.com/CPphCBPgIL

JONES CLAIMS AHL WEEKLY HONOURS
Former Peterborough Petes netminder Hunter Jones has been named the AHL Player of the Week. The Iowa Wild goaltender went 3-0 with a 1.01 goals-against average, .969 save percentage and one shutout, stopping 93 of the 96 shots he faced. Jones, 20, is 4-7-1 in his rookie season with Iowa after being selected by the Minnesota Wild in the second round of the 2019 NHL Draft. Jones played in Peterborough from 2017-20, going 62-47-4-3 with a 3.31 goals-against average and .901 save percentage over 121 career regular season games.

We know it’s April Fools Day, but this is far from a joke.
Riley Damiani is the AHL Rookie of the Month with 15-points in March.
He sits atop all rookies in the AHL and is second among all players with 23 points during his debut season.
Read: https://t.co/9wfOktcZhO pic.twitter.com/An8Glfav2s

AGOZZINO RECORDS 400TH AHL POINT
Niagara IceDogs all-time leading scorer Andrew Agozzino reached the 400-point milestone in the American Hockey League on Sunday. The San Diego Gulls forward recorded two assists in a 6-4 win over the Ontario Reign, giving him 401 points (167-234–401) over 522 career AHL contests. The 30-year-old from Kleinburg, Ont. has 16 points (7-9–16) through 18 games with the Gulls this season. Agozzino played in Niagara from 2007-12, finishing his OHL career with 306 points (159-147–306) in 318 regular season games. Agozzino has appeared in 45 career NHL regular season games.