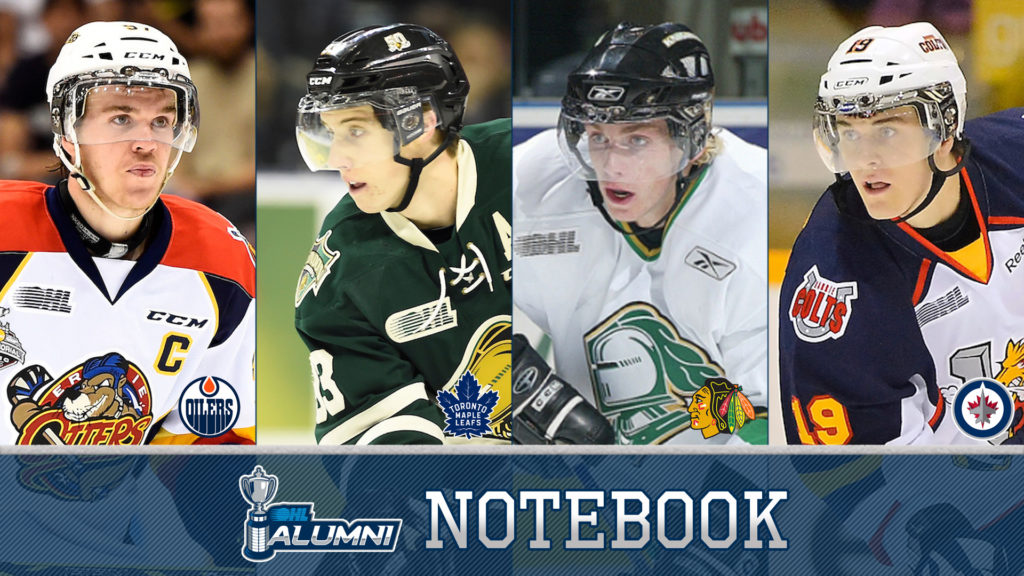 THORNTON NOTCHES TWO POINTS IN RETURN
Soo Greyhounds graduate Joe Thornton slotted back into the Toronto Maple Leafs lineup on Monday and contributed right away. Having missed close to a month to a fractured rib, the durable 41-year-old picked up a goal and an assist in the Leafs’ 6-5 overtime collapse against the Ottawa Senators. Now in his 23rd NHL season and first in Toronto, Thornton has four points (2-2–4) through six games for a total of 1,513 on his career. Thornton skated with the Soo Greyhounds from 1995-97 before being selected by the Boston Bruins with the first overall pick of the 1997 NHL Draft.

He now has 390 career multi-point games, two back of Bryan Trottier for 18th place in NHL history. #NHLStats: https://t.co/5VmmA08Mzo pic.twitter.com/ksVMgTXe2O

Big night for these two 🙌🏻 pic.twitter.com/ehb7QINg0Y

SUTER LEADS NHL ROOKIES
Former Guelph Storm OHL champion Pius Suter leads NHL rookies with six goals and 10 points. The 24-year-old Chicago Blackhawks forward is off to quite a start after spending the past six seasons in Switzerland’s pro ranks. Suter has points in three of his last four games as the Blackhawks own an 8-5-4 record in the NHL’s Central Division. Suter played two seasons in Guelph from 2013-15, hoisting the Robertson Cup with the Storm in 2014.

Pius Suter assisted on the @NHLBlackhawks’ overtime goal to record his 10th point of the season (6-4—10 in 17 GP), tops among all rookies. #NHLStats pic.twitter.com/3oJg2t9wM1

BUNTING NAMED AHL PLAYER OF THE WEEK
Soo Greyhounds graduate Michael Bunting is the AHL’s Player of the Week for the period ending February 14th. Bunting recorded four goals (including two game-winning tallies) and three assists for seven points in three games as the Tucson Roadrunners continued their perfect start to the season. The 25-year-old has totaled 82 goals and 111 assists for 193 points in 311 career AHL games with Tucson and Springfield, and was an AHL All-Star in 2019. Bunting played for the Greyhounds from 2013-15 and was selected by the Coyotes in the fourth round of the 2014 NHL Draft.

GOGOLEV INKS WITH MARLIES
Guelph Storm 45-goal scorer Pavel Gogolev has signed an AHL contract with the Toronto Marlies. The soon-to-be 21-year-old played four OHL seasons between Peterborough and Guelph from 2016-20, being rewarded after a 96-point season with the Storm in 2019-20. He’s played in 12 games with the Swedish Allsvenskan’s Vasby IK squad so far this season, recording three points (2-1–3). He’ll slot into the Marlies lineup following a government-mandated travel quarantine.
READ MORE

Congrats Pavel Gogolev!@Storm_City 45-goal scorer and 2019-20 #OHL third team all-star has signed an #AHL contract with the @TorontoMarlies, who get their season underway tonight.