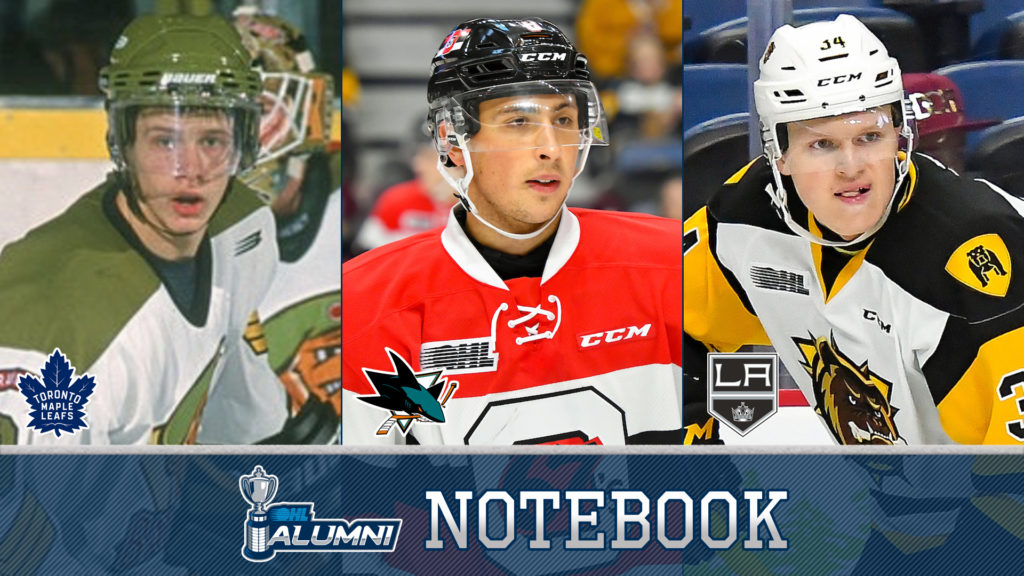 KANE NAMED NHL’S SECOND STAR OF THE WEEK
Former OHL Rookie of the Year Patrick Kane of the Chicago Blackhawks is the NHL’s second star of the week after recording two goals, five assists and seven points in three games. The Hawks went 2-0-1 on the week as Kane put together his 14th-career four-point game on Thursday against Carolina. Kane is off to a great start with 17 points (6-11–17) through 13 games.

KALIYEV, ROBERTSON SCORE FIRST CAREER NHL GOALS
A pair of American-based OHL products scored their first career NHL goals this past week. High-scoring Hamilton Bulldogs winger Arthur Kaliyev scored in his NHL debut on Tues., Feb 2nd as his Los Angeles Kings defeated the Anaheim Ducks 3-1. Kaliyev, who won a gold medal with the United States at the 2021 World Juniors, was a second round pick by the Kings in the 2019 NHL Draft. He was an OHL first team all-star in 2019-20. Former Eddie Powers Trophy recipient Jason Robertson also scored his first in the NHL, getting the Dallas Stars on the board in a 2-1 loss to the Chicago Blackhawks. Robertson scored in his fourth game of the season. The former Niagara IceDogs and Kingston Frontenacs forward spent the 2019-20 season with the AHL’s Texas Stars, recording 47 points (25-22–47) in 60 games. He put together three consecutive OHL seasons with at least 40 goals.

CHMELEVSKI PICKS UP AN ASSIST IN NHL DEBUT
Former OHL Scholastic Player of the Year and Roger Neilson Award winner Sasha Chmelevski hit the ice with the San Jose Sharks, picking up an assist in his NHL debut on Friday. The Sharks defeated the Anaheim Ducks 5-4 and Chmelevski, who was born in Newport Beach, Calif., skated just over six minutes and recorded two shots on goal. The former sixth round pick by the Sharks in 2017 recorded 213 points (102-111–213) over four seasons between Sarnia and Ottawa from 2015-19.

Former #OHL and #CHL Scholastic Player of the Year Sasha Chmelevski (@sashachmelevski) picked up an assist in his #NHL debut with the #SJSharks on Friday. @Ottawa67sHockey graduate was a sixth round pick in the 2017 #NHLDraft. pic.twitter.com/9x9uR0V47d

BLUE JACKETS JENNER AND FOLIGNO HIT CAREER MILESTONES
Former Oshawa Generals captain Boone Jenner skated in his 500th career NHL contest on Tues., Feb. 2nd against Dallas. The hard-working forward from Dorchester, Ont., has six points (3-3–6) through his first 13 games of the 2020-21 season, embarking on his eighth season in Columbus after being a second round pick by the Jackets back in 2011. Teammate and Columbus captain Nick Foligno scored his 200th career NHL goal on Sunday as the Blue Jackets fell 6-5 to Carolina. The 33-year-old Foligno has played in 921 career NHL contests following a three-year OHL career with the Sudbury Wolves from 2004-07.

HAT-TRICKS FOR LAUGHTON, SPEZZA
Another ex-Oshawa Generals captain, Scott Laughton potted his first NHL hat-trick on Sunday to lead the Philadelphia Flyers over the Washington Capitals 7-4. Laughton has nine points (4-5–9) through 13 games this season. The 26-year-old from Oakville, Ont. is in his seventh season with the Flyers after originally being selected with the 20th overall pick of the 2012 NHL Draft. Laughton played for the Generals from 2010-14. Going further back in OHL history, one-time 15-year-old standout Jason Spezza netted a hat-trick for the Toronto Maple Leafs on Thursday, helping them defeat the Vancouver Canucks 7-3. Spezza’s eight career hat-trick was his first since April 9, 2016. The 37-year-old has eight points (4-4–8) through 11 games with the Leafs this season. The former second overall NHL Draft pick played four seasons in the OHL from 1998-2002, playing with Brampton, Mississauga, Windsor and Belleville.

WILLIAMS JOINS CAROLINA FRONT OFFICE
Justin Williams didn’t stay out of the game for long. The 39-year-old, who announced his retirement on Oct. 8, 2020, has joined the Carolina Hurricanes front office as special advisor to general manager Don Waddell. Williams, from Cobourg, Ont., won three Stanley Cup titles, hoisting the trophy with the Hurricanes in 2006 before doing so again with the Los Angeles Kings in 2012 and 2014. He played two seasons in the OHL with the Plymouth Whalers from 1998-2000, being drafted 28th overall by the Philadelphia Flyers in 2000.

Welcome to the front office, Willy!https://t.co/ofpva5jIwr

167 PAST AND PRESENT OHL PLAYERS ON AHL OPENING NIGHT ROSTERS
A total of 167 past and present OHL players were named to AHL Opening Night Rosters this past weekend. That figure includes 72 players that competed in the Ontario Hockey League in 2019-20. Additionally, with the OHL’s 2020-21 regular season currently delayed, a total of 29 players born in 2001 or younger are included on the list.
FULL LIST

166 past and present #OHL players started the season on #AHL rosters including a total of 71 who competed during the 2019-20 season.

MEIRELES NAMED ECHL ROOKIE OF THE MONTH
Kitchener Rangers graduate Greg Meireles was named ECHL Rookie of the Month for January. The Greenville Swamp Rabbits forward recorded three goals and eight assists for 11 points over nine games. The 22-year-old from Ottawa, Ont. signed a one-year AHL contract with the Charlotte Checkers prior to their sitting out the 2020-21 season. A sixth round pick by the Florida Panthers in 2019, Meireles appeared in 244 career OHL regular season games with the Rangers, recording 239 points (99-140–239) in the process.