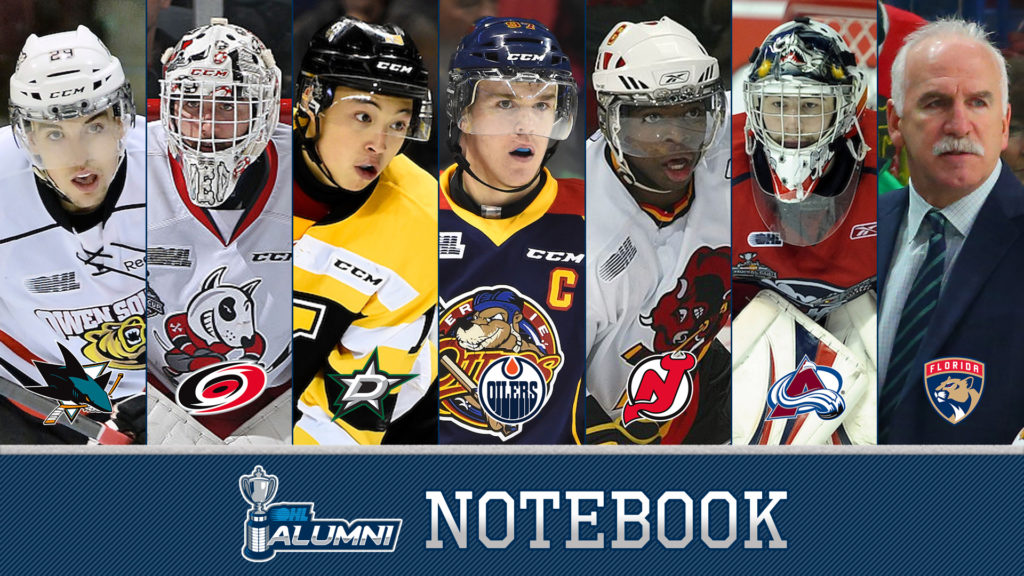 Hart Memorial Trophy – Connor McDavid (Edmonton Oilers)
Former Erie Otters star Connor McDavid is in the hunt for his second Hart Memorial Trophy as the NHL’s Most Valuable Player. The 24-year-old Edmonton Oilers centreman led the NHL with 105 points (33-72–105) in just 56 games to win the Maurice Rocket Richard Trophy as the league’s leading scorer. McDavid rounded-out his OHL career with 120 points (44-76–120) for the Otters in 2014-15 and was later named MVP of the 2015 OHL Playoffs as Erie fell to Oshawa in the championship final. Other Hart finalists include Colorado’s Nathan MacKinnon and Toronto’s Auston Matthews.

Vezina Trophy – Philipp Grubauer (Colorado Avalanche)
Former Memorial Cup champion Philipp Grubauer of the Colorado Avalanche is in the running for the NHL’s Goaltender of the Year honour. The 29-year-old from Rosenheim, Germany led the NHL with a 1.95 goals-against average and went 30-9-1 for a strong Avalanche team, also posting a .922 save percentage. Grubauer played in the OHL rom 2008-11 between Belleville, Windsor and Kingston going 52-36-5-5 over 105 regular season appearances. He’s up against Vegas Golden Knights netminder Marc-Andre Fleury and Tampa Bay Lightning puckstopper Andrei Vasilevskiy for the award.

Ted Lindsay Award – Connor McDavid (Edmonton Oilers)
Erie Otters graduate Connor McDavid is up for a pair of honours, including the Ted Lindsay Award given to the most outstanding player in the NHL as voted by fellow members of the NHLPA. McDavid led the NHL with an impressive 105 points (33-72–105) in just 56 games. The Edmonton Oilers captain from Newmarket, Ont. recorded his fourth 100+ point season and is in the hunt for his third Ted Lindsay Award. McDavid was an Otters star from 2012-15, earning the Red Tilson Trophy as the OHL Player of the Year in 2015. McDavid is in the running against Pittsburgh’s Sidney Crosby and Toronto’s Auston Matthews.

Presenting the finalists for the Ted Lindsay Award, as voted on by members of the @NHLPA!

Calder Trophy – Alex Nedeljkovic (Carolina Hurricanes) and Jason Robertson (Dallas Stars)
A pair of Niagara IceDogs graduates are finalists for the NHL’s Rookie of the Year honour. Carolina Hurricanes goaltender Alex Nedeljkovic had a strong rookie season as a 25-year-old, going 15-5-3 with a 1.90 goals-against average and .932 save percentage in 23 appearances. His strong play continued into the playoffs where he went 4-3-2 with a 2.17 G.A.A. and .920 save percentage. A former OHL Goaltender of the Year, Nedeljkovic played four OHL seasons between Plymouth, Flint and Niagara from 2012-16. Another former IceDog, Jason Robertson of the Dallas Stars had a rookie season to remember with 45 points (17-28–45) in 51 games. The 21-year-old from Arcadia, Calif. led the OHL in points during the 2018-19 campaign, posting 117 (48-69–117) over 62 contests. Robertson spent much of his four-year OHL career with the Kingston Frontenacs, and finished up with 317 points (149-168–317) over 252 career regular season games. Minnesota’s Kirill Kaprizov rounds out this year’s Calder Trophy finalists.

King Clancy Memorial Trophy – Kurtis Gabriel (San Jose Sharks) and P.K. Subban (New Jersey Devils)
OHL grads Kurtis Gabriel (Owen Sound Attack) and P.K. Subban (Belleville Bulls) are finalists for the NHL’s King Clancy Memorial Award presented to the player who best exemplifies leadership qualities on and off the ice and has made a noteworthy humanitarian contribution in his community. Gabriel has helped promote LGBTQ+ awareness, using his social media accounts to amplify and educate fans and players on LGBTQ+ causes by participating in events, having conversations and using rainbow-colored pride tape on his hockey sticks. Subban has been committed to racial and social justice, underserved youth, COVID-19 relief, and youth hockey. He created the P.K. Subban Foundation in 2014 while playing for the Montreal Canadiens and pledged $10 million over seven years to Montreal Children’s Hospital. Nashville Predators goaltender Pekka Rinne rounds out the list of finalists.

Jack Adams Award – Joel Quenneville (Florida Panthers)
Former Windsor Spitfires defenceman Joel Quenneville of the Florida Panthers is up for NHL Coach of the Year honours. Quenneville directed a club that set franchise records for both highest points percentage (.705, 37-14-5) and most goals-per-game (3.36). Second on the all-time list for regular-season coaching wins with 962, Quenneville is a Jack Adams Award finalist for the third time and with his third club over his 24 seasons as an NHL head coach. He captured the trophy as head coach of the St. Louis Blues in 1999-00. The Panthers have never had a Jack Adams Award winner. Quenneville patrolled the blue line for the Spitfires from 1975-78 before an 803-game NHL career from 1978-91.

MULLER, MACLEAN JOIN FLAMES BENCH
A pair of Kingston OHL graduates have been added to the bench of the Calgary Flames. Former Kingston Canadians forward and 19-year NHL pro Kirk Muller will join Darryl Sutter’s bench as an associate coach while ex-Frontenacs forward Cail MacLean gets the promotion from the AHL to be an assistant. Muller had been an associate with the Montreal Canadiens until being relieved of his duties in February. MacLean, who played in Kingston from 1993-97, had been the head coach of the AHL affiliate Stockton Heat since 2017.

The #Flames have named Kirk Muller as associate coach and Cail MacLean as assistant coach. https://t.co/MPTOBxSInP

GAZDIC ANNOUNCES RETIREMENT
After a pro career that spanned parts of 11 seasons and included 147 career NHL games, Erie Otters graduate Luke Gazdic has announced his retirement at the age of 31. The 6-foot-4, 225Ib. winger took to Twitter to formally make the announcement on May 30, putting the finishing touches on a pro career that included stops in nine different cities. Read more

Luke Gazdic (@lukegazdic) has officially announced his retirement after recording 4 @NHL seasons and 147 regular-season games with the @edmontonoilers and @njdevils. Congratulations Luke on a fantastic career and welcome to the #NHLAlumni Association! 👏 pic.twitter.com/R6HZJ0dx7V

DAMIANI NAMED AHL ROOKIE OF THE YEAR
Kitchener Rangers graduate and former co-captain Riley Damiani is the American Hockey League’s Rookie of the Year, earning the Dudley (Red) Garrett Memorial Award with 36 points (11-25–36) in 36 games. The 21-year-old former fifth round NHL Draft pick from Mississauga, Ont., Damiani recorded 222 points (86-136–222) over four seasons in Kitchener from 2016-20 after being a second round pick by the Rangers in the 2016 OHL Priority Selection.

.@rileydamiani of the @TexasStars has won the Dudley (Red) Garrett Memorial Award as the AHL’s outstanding rookie for 2020-21.https://t.co/j46bcwuYQu | #AHLAwards pic.twitter.com/mBdxcsCX0w

MURPHY NAMED AHL’S TOP DEFENCEMAN
Kitchener Rangers graduate Ryan Murphy is the 2020-21 American Hockey League Defenceman of the Year. The Henderson Silver Knights rearguard led all defenders with 27 points (5-22–27) over 37 games on the season to claim the Eddie Shore Award. Murphy’s 14 power play points were tied for second in the league, and his 78 shots on goal were tied for first among defencemen. A 28-year-old from Aurora, Ont., Murphy was an OHL first team all-star in 2010-11 when he scored 26 goals from the back end and was subsequently selected 12th overall by the Carolina Hurricanes in the 2011 NHL Draft.

Ryan Murphy of the @HSKnights has won the Eddie Shore Award as the AHL’s outstanding defenseman for 2020-21.https://t.co/XsdrKJOVIV | #AHLAwardspic.twitter.com/mtgqkhgVWu

CARBERY NAMED AHL COACH OF THE YEAR
Former Saginaw Spirit coach Spencer Carbery has received the Louis A.R. Pierre Memorial Award as the AHL Coach of the Year. The Hershey Bears bench boss steered his club to a first place finish with a 24-7-2-0 record, good for a .758 winning percentage. Head coach in Hershey since June of 2018, Carbery has guided the Bears to a three-year record of 104-50-9-8. The 39-year-old from Victoria, BC guided the Spirit to a 27-32-9 mark during the 2016-17 season.

Spencer Carbery of @TheHersheyBears has been voted the winner of the AHL’s 2020-21 Louis A.R. Pieri Memorial Award as the league’s outstanding coach.https://t.co/spFaywtlTh | #AHLAwards pic.twitter.com/IpCicrgb8S

LUCHUK WINS ECHL SCORING TITLE
Orlando Solar Bears forward Aaron Luchuk led the ECHL with 74 points (28-46–74) in 72 games during the 2020-21 season. The former Windsor Spitfires and Barrie Colts forward from Kingston, Ont. completed his third pro season following what was a four-year OHL career from 2013-18. Luchuk raised the Memorial Cup as a member of the Spitfires in 2017, scoring the game winning goal against Erie in the championship final. Other recent OHL grads to win the ECHL scoring title include Shawn Szydlowski (2017-18), brothers Justin (2010-11) and Tyler Donati (2009-10) as well as Kevin Baker (2008-09).