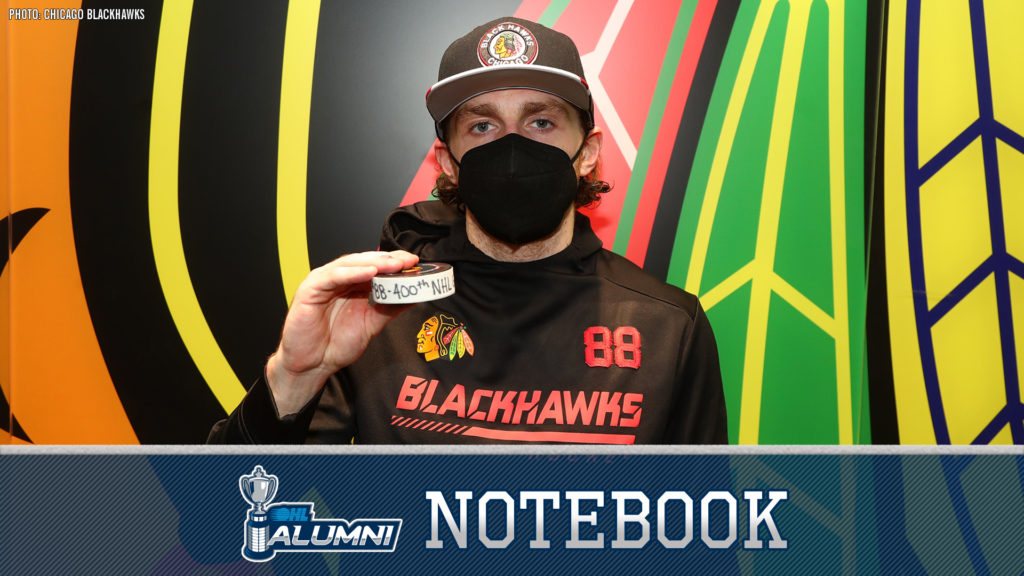 KANE SCORES 400TH GOAL, NAMED 2ND STAR OF THE WEEK
Patrick Kane joined an impressive list of Chicago Blackhawks on Sunday, joining Bobby Hull, Stan Mikita and Steve Larmer as the fourth player in franchise history to score 400 career NHL goals. Kane picked up a goal and two assists as Chicago defeated Detroit 7-2. The 32-year-old is the fifth-youngest player in NHL history to accomplish the feat, doing so in his 996th career contest while also becoming the ninth American-born player to reach the milestone. Kane was also named the NHL’s Second Star of the Week and sits tied for second in NHL scoring with 34 points this season. A former OHL and CHL Rookie of the Year in 2007, Kane racked up 145 points (62-83–145) with the London Knights prior to being selected by the Blackhawks with the first overall pick of the 2007 NHL Draft. Kane joins Brendan Shanahan, Dino Ciccarelli, Darryl Sittler, Rick Nash and Garry Unger as the sixth player in Knights all-time franchise history to score 400 NHL goals.

You can add another milestone to Patrick Kane’s illustrious career. #NHLStats pic.twitter.com/zrFG2hLd8y

FOWLER SKATES IN 700TH GAME
Former Windsor Spitfires Memorial Cup champion Cam Fowler suited up in his 700th career NHL contest on Friday, picking up an assist as his Anaheim Ducks fell to the Vegas Golden Knights 3-2. The 29-year-old from Farmington Hills, Mich. has played all 11 of his NHL seasons in Anaheim after being selected by the Ducks with the 12th pick of the 2010 NHL Draft. Fowler spent the 2009-10 season in Windsor, helping the Spits capture their second consecutive Memorial Cup with 55 points (8-47–55) in as many regular season games before posting 14 (3-11–14) in 19 playoff outings. He has 10 points (2-8–10) in 20 games with the Ducks so far this season.

Make it 700 for Cam! pic.twitter.com/YwIpLKvNYT

BURAKOVSKY PLAYS 400TH NHL GAME
Erie Otters graduate Andre Burakovsky skated in his 400th career NHL contest on Friday. The 26-year-old helped his Colorado Avalanche skate to a 3-2 win over the Arizona Coyotes with a goal. The 6-foot-3, 200Ib. winger has 11 points (4-7–11) in 15 games with the Avs this season. Originally selected by the Washington Capitals with the 23rd overall pick of the 2013 NHL Draft, Burakovsky played in Erie for the 2013-14 campaign, putting up 87 points (41-46–87) in just 57 games.

MURPHY, DRYSDALE ATOP AHL SCORING LEADERS FROM THE BLUE LINE
A pair of OHL products are leading offensive producers among AHL defencemen. Kitchener Rangers graduate Ryan Murphy of the Henderson Silver Knights leads the league with 10 points (3-7–10) in nine contests while San Diego Gulls rookie sensation and Erie Otters standout Jamie Drysdale trails close behind with nine points (4-5–9) through 11 games. Drysdale was named the AHL’s Rookie of the Month for February on Monday. Now in his ninth pro season, Murphy started the 2020-21 campaign with Dynamo Minsk of the KHL. The former 12th overall pick of the Carolina Hurricanes in 2011 played four seasons in Kitchener from 2010-13 and sits third in all-time scoring by a Rangers defenceman with 220 points (53-167–220) over 228 games. An OHL first team all-star in 2019-20, Drysdale was the sixth overall pick of the Anaheim Ducks this past summer. He won gold as part of Canada’s National Junior Team in 2020 and followed up with a silver medal in January.

Jamie Drysdale had himself a month!

Today, @TheAHL named him February’s AHL/CCM Rookie of the Month after recording four goals and five assists for 9 points in his first 11 games.

Keep it up, Jamie!

AUSTIN SIGNS ATO WITH BELLEVILLE
Peterborough Petes netminder Tye Austin is the latest OHL player to sign an Amateur Tryout Agreement with an AHL club. The 18-year-old from Pembroke, Ont. has inked with the Belleville Senators, top affiliate of the Ottawa Senators. Austin, who is expected to carry a starting role for the Petes when the puck drops in 2020-21, played to a 6-7-0 record in his sophomore campaign. Austin joins Ottawa 67’s overage goaltender Cedrick Andree, who also signed an ATO, in Belleville.