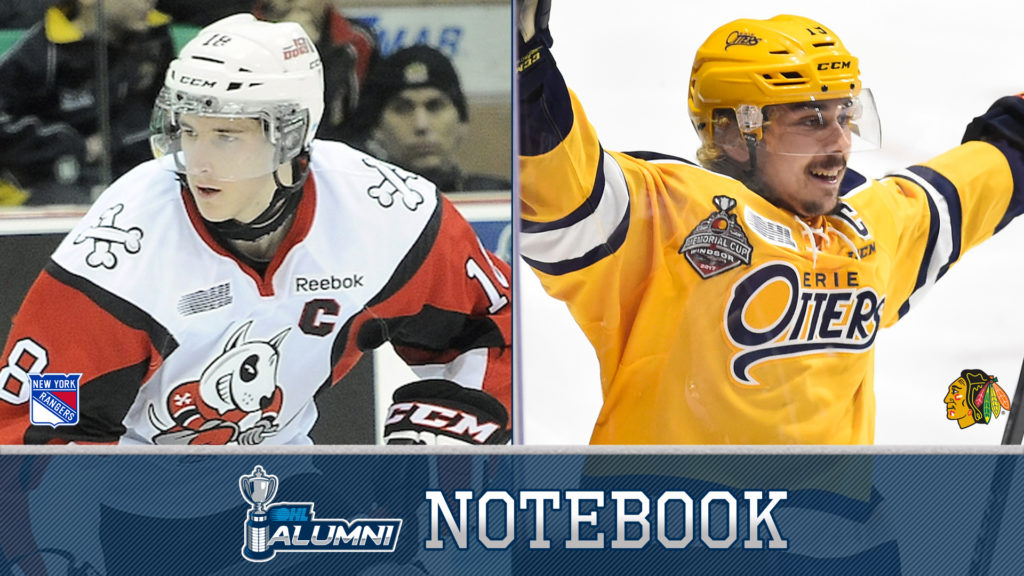 GOOD NEWS FOR STROME BROTHERS
Ryan Strome is riding a nine-game point streak, and younger brother Dylan Strome is a new dad. The eldest Strome brother leads his New York Rangers with 32 points (11-21–32) in 34 games this season. Ryan, 27, is in good company, with just two other Rangers in the past decade having enjoyed point streaks longer than nine games, namely Artemi Panarin (13 games, 2019-20) and Rick Nash (11 games, 2014-15). Ryan enjoyed a four-year OHL career between Barrie and Niagara from 2009-13. Dylan is a first-time father after he and partner Tayler announced the arrival of 7Ib. 7 oz. girl Weslie Margaret on Sunday. The 24-year-old Dylan has posted nine points (5-4–9) through 24 games with the Chicago Blackhawks this season. Dylan remains the all-time leading scorer in Erie Otters history, guiding them to an OHL championship in 2017.

Congrats to Dylan Strome and Tayler on the birth of their baby girl Weslie Margaret Strome, coming in at 7lb, 7 oz!

As such, Strome will not play in tonight’s game against Nashville.#BlackhawksBabies | #Blackhawks

STAAL ON THE MOVE TO MONTREAL
Former Peterborough Petes star Eric Staal is on the move to his fifth NHL team. The 36-year-old centreman was acquired by the Montreal Canadiens on Friday in exchange for third and fifth-round draft picks in 2021. Staal’s brief stay in Buffalo included 10 points (3-7–10) through 32 games on a struggling Sabres team. The Thunder Bay, Ont. native joins the Canadiens who sit fourth in the NHL’s North Division with a 14-8-9 record. Staal was the second overall pick of the 2003 NHL Draft following three solid seasons in Peterborough from 2000-03.

ROBERTSON TURNING HEADS IN DALLAS
Former OHL scoring champion Jason Robertson continues his tremendous rookie season with the Dallas Stars. The 21-year-old scored his sixth goal of the season on Sunday as the Stars fell to the Florida Panthers 4-1. Robertson has put up 15 points since March 1st, currently the seventh-best month ever put together by a Stars rookie. Neal Broten (February 1982) currently owns the best mark, with a total of 25 points to his credit. Robertson has 21 points (6-15–21) through 27 games. The former second round pick in the 2017 NHL Draft racked up 317 points (149-168–317) over a four-year OHL career between Kingston and Niagara from 2015-19.

STANLEY NETS FIRST NHL GOAL
Kitchener Rangers graduate Logan Stanley scored the first goal of his NHL career on Saturday as his Winnipeg Jets fell 4-2 to the Calgary Flames. A 6-foot-7, 228Ib. defenceman from Waterloo, Ont., Stanley has a goal and an assist through 23 games in his rookie season, also registering a plus-9 rating. Winnipeg’s first round pick in the 2016 NHL Draft, Stanley played four OHL seasons between Windsor and Kitchener from 2014-18, hoisting the Memorial Cup with the Spitfires in 2017.

ENTWISTLE MAKES NHL DEBUT
Former back-to-back OHL champion MacKenzie Entwistle got into his first NHL action on March 23rd as his Chicago Blackhawks beat the Florida Panthers 3-2. The 21-year-old from Georgetown, Ont. got the call up from the AHL’s Rockford IceHogs where he had recorded six points (2-4–6) through 14 games. Entwistle played four OHL seasons between Hamilton and Guelph from 2015-19, winning the Robertson Cup with the Dogs in 2018 and again with the Storm in 2019. He was chosen by the Arizona Coyotes in the third round of the 2017 NHL Draft, but was later dealt to Chicago in a trade that saw the Coyotes pick up the contract of Hawks forward Marian Hossa.

Congrats to Entwistle on making his @NHL debut!

“He’s got a lot more offensive touch than people gave him credit for early on when he was framed as that defensive, rugged centerman…He’s got a good release. He wants the puck. He wants to be a difference-maker.”

Check out the AHL scoring leaders and you will find Riley Damiani and Adam Mascherin in the top five. They have also played the least amount of games out of anyone in that top five #txstars #GoStars

O’ROURKE, GOLOD STRIKE FOR FIRST AHL GOALS
Soo Greyhounds captain Ryan O’Rourke found the back of the net for the first time in his pro career on Saturday as the Iowa Wild defeated the Grand Rapids Griffins 5-4. An 18-year-old from Pickering, Ont., O’Rourke was Minnesota’s second round pick last summer and has five points (1-4–5) through 15 games in the AHL this season. The Greyhounds defender posted 37 points (7-30–37) in his sophomore OHL season in 2019-20. Erie Otters graduate Maxim Golod also got on the scoresheet, posting a goal and an assist as the San Diego Gulls defeated the Ontario Reign 5-3 on March 24th. Golod, who signed an entry-level NHL contract with the Anaheim Ducks on October 15th, has four points (1-3–4) through nine games with San Diego this season. The 20-year-old from Concord, Ont., had his most productive OHL season in 2019-20, amassing 78 points (25-53–78) in 63 games.

This one’s for you, Golod!