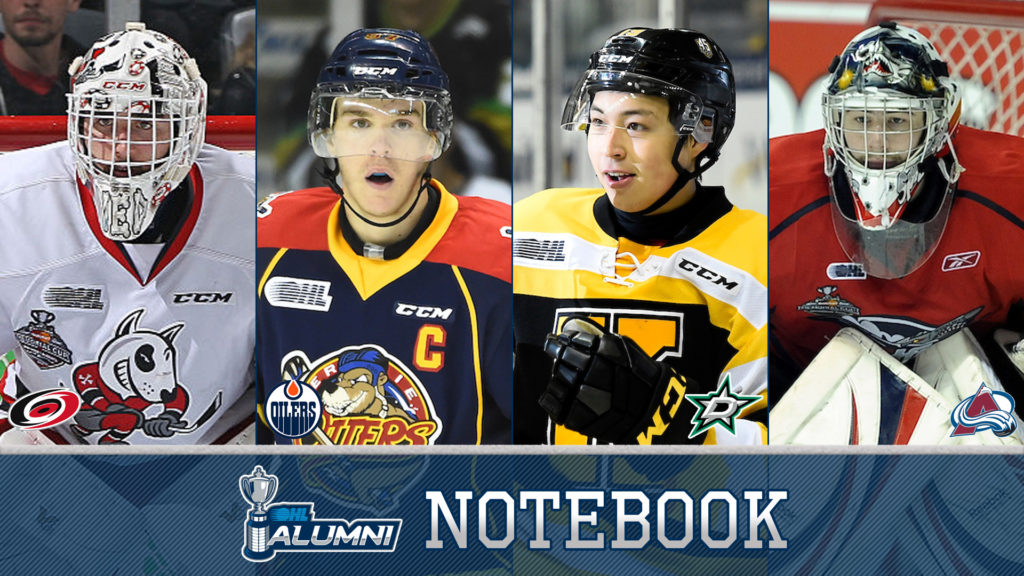 115 OHL GRADS IN PURSUIT OF STANLEY CUP
The 2021 Stanley Cup Playoffs got underway on Saturday night and a total of 115 OHL graduates are in pursuit of this year’s ultimate NHL prize. The Toronto Maple Leafs lead the way with 17 OHL graduates on their playoff roster while the Carolina Hurricanes and defending Stanley Cup champion Tampa Bay Lightning trail with 11 apiece. Full List

The quest for the #StanleyCup has begun with 115 #OHLAlumni in pursuit.

11 PAST AND PRESENT OHL PLAYERS TO REPRESENT CANADA AT IIHF WORLDS
Hockey Canada announced Friday its 25-man roster for the 2021 IIHF World Hockey Championship set to take place from May 21-June 6 in Riga, Latvia. The list is highlighted by Saginaw Spirit forward and reigning OHL Scholastic Player of the Year Cole Perfetti who has spent the 2020-21 season with the AHL’s Manitoba Moose. Recent OHL graduates include 2018 Goaltender of the Year Michael DiPietro of the Vancouver Canucks as well as Columbus Blue Jackets forward Liam Foudy. Read More

A total of 11 past and present #OHL players have been named to @HockeyCanada’s roster for the 2021 #IIHFWorlds set to begin May 21st in Riga, Latvia.

McDAVID CLAIMS ART ROSS TROPHY
Former OHL most outstanding player Connor McDavid claimed his third Art Ross Trophy as the NHL’s leading scorer of the 2020-21 season. The Edmonton Oilers captain finished with 33 goals, a league-leading 72 assists and 105 points over just 56 games, helping the Oilers reach the postseason for a second straight year. The Erie Otters graduate recorded 285 points (97-188–285) over three seasons with the Otters from 2012-15.

Congrats to Connor on his third Art Ross title. 🏆#LetsGoOilerspic.twitter.com/ikEtXy4WRK

NEDELJKOVIC, GRUBAUER TOP NHL G.A.A. LIST
OHL graduates Alex Nedeljkovic and Philipp Grubauer turned in excellent 2020-21 seasons, recording two of the lowest goals-against averages in the NHL. Niagara IceDogs graduate Nedeljkovic led the way with a 1.90 figure in his first full season with the Carolina Hurricanes. The 25-year-old from Parma, Ohio went 15-5-3 over 23 games with the Carolina Hurricanes, also posting a league-best .932 save percentage. In Colorado, Avalanche netminder Philipp Grubauer trailed close behind with a 1.95 goals-against average, going 30-9-1 on the season with a .922 save percentage. The 29-year-old German puckstopper was a Memorial Cup champion with the Windsor Spitfires in 2010.

ROBERTSON FINISHES SECOND IN NHL ROOKIE SCORING
Former OHL top scorer Jason Robertson is in the running for the Calder Trophy, finishing second among NHL rookies with 45 points (17-28–45) in 51 games with the Dallas Stars. The 21-year-old former Kingston Frontenacs and Niagara IceDogs star was Dallas’ second round pick in the 2017 NHL Draft. He racked up 317 points (149-168–317) over four NHL seasons between 2015-19.

“I just want to be a role model for everyone. Whatever background they come from or wherever it is they’re from.”

The 21-year-old from Southern California is helping pave the way for people of all backgrounds to enjoy the sport.#GoStarshttps://t.co/bAILtjkH1j

HORVAT PLAYS 500TH CAREER GAME
Vancouver Canucks captain Bo Horvat got into his 500th career NHL game on Sunday. The 26-year-old from Rodney, Ont. is in his seventh season with the Canucks after being part of a London Knights program that made three consecutive Memorial Cup appearances throughout his tenure from 2011-14. Horvat has posted 37 points (18-19–37) through 54 games in 2020-21, overcoming a bout with COVID-19 in the process. The hard-working two-way centreman becomes the 27th player in Canucks franchise history to play in 500 games with the club.

NHL DEBUTS FOR GADJOVICH, RUZICKA AND RYMSHA
A trio of OHL graduates made NHL debuts this past week. Former London Knights, Ottawa 67’s and Sarnia Sting forward Drake Rymsha saw his first action with the Los Angeles Kings on Thursday night. The 22-year-old had seen just one game of AHL action in 2020-21, spending the rest of his time with the Kings’ taxi squad practicing with the big club. The Huntington Woods, Mich. native was Los Angeles’ fifth round pick in 2017 and played four OHL seasons between the three aforementioned clubs. Gadjovich played for the Vancouver Canucks on Sunday after putting up 15 goals in 19 games for the AHL’s Utica Comets this season. The big power winger played four seasons for the Owen Sound Attack from 2014-18, scoring 46 goals in his third campaign before being selected in the second round by the Canucks in 2017. Ruzicka got into action with the Calgary Flames on Sunday following a 21-point season with the Stockton Heat. The 6-foot-4 Slovakian centreman played three OHL seasons between Sarnia and Sudbury from 2016-19, scoring 96 goals in the process.

Welcome to the National Jonah! pic.twitter.com/EqWiMyGCgk

McMICHAEL NAMED AHL PLAYER OF THE WEEK
London Knights graduate Connor McMichael is the AHL’s Player of the Week after posting six points (2-4–6) in a pair of victories, helping the Hershey Bears secure the league’s best record for the 2020-21 season. McMichael scored a league-leading eighth game winning goal on Saturday before posting a career-high four points on Sunday. A first round pick of the Washington Capitals in 2019, McMichael led Hershey in scoring with 27 points (14-13–27) over 33 games in his first pro season. The native of Ajax, Ont. registered 190 points (91-99–190) over 179 career regular season games between Hamilton and London from 2017-20.

MURPHY LEADS AHL DEFENDERS IN SCORING
Former Kitchener Rangers defender Ryan Murphy led AHL blueliners with 27 points (5-22–27) this past season. The 28-year-old from Aurora, Ont. returned to North America after spending last year and the start of the 2020-21 season in Russia. A former 12th overall pick of the Carolina Hurricanes in the 2011 NHL Draft, Murphy starred for the Henderson Silver Knights in their inaugural season, being named team captain late in the season. He’s skated in 175 career NHL contests between Carolina, Minnesota and New Jersey since 2012-13. Murphy played for the Rangers from 2009-13, recording 220 points (53-167–220) over 228 career regular season games.

BROCHU MAKES PRO DEBUT WITH WILKES-BARRE/SCRANTON
London Knights goaltender Brett Brochu successfully leaped from Junior C to the American Hockey League in the span of two seasons on Sunday, making his AHL debut with the Wilkes-Barre/Scranton Penguins. Brochu became the youngest player to ever appear in a game for the AHL Pens, as they fell 5-2 to the first place Hershey Bears to end their season. Brochu earned the OHL’s Dinty Moore Trophy for the best rookie goals-against average of 2.40 in 2019-20, a figure that led the entire league. He was also a first all-rookie team member, playing to a record of 32-6-0.

At 18 years, 8 months, 7 days – or 6,824 days – @BrettBrochu will today become the youngest player ever to appear in a #WBSPens game, nudging out @kasperikapanen1 by eight days (18 years, 8 months, 15 days – 6,832 days).#WilkesBarre #Scranton #AHL#AmericanHockeyLeague pic.twitter.com/n6iIJLkVBh