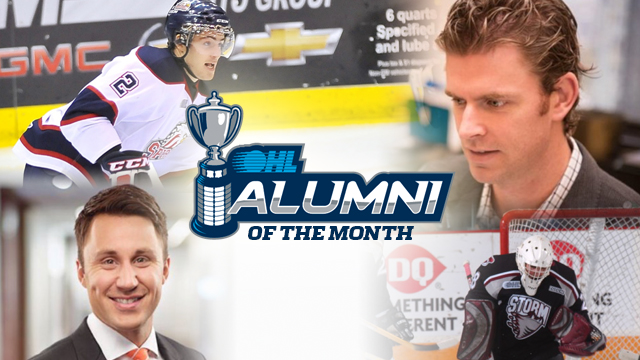 Brad is currently a Strategic Account Manager with Rusted Rooster Media in Midland, MI. He graduated from Northwood University with a Bachelor’s Degree in Finance and was on the President’s List. Brad is currently the only alumnus from the Saginaw Spirit in 15 seasons who hails from Saginaw, MI.

After graduating from the OHL, Blake went on attend the University of Western Ontario and Queen’s University for Law School. While in law school, Blake was awarded first-class honours in Contract Law, and first class honours in Public-Private Partnerships: Cross-Border Trade and Infrastructure.  He was also the recipient of the Dean Ivan C Rand Award, granting membership into the Honour Society for meritorious academic standing and outstanding contributions in the service of the students and of the Faculty of Law. Blake now works as an associate at Torys LLP, which focuses on mergers and acquisitions as well as capital market transactions.

Chris not only performed on the ice, but also in the classroom as he was named to the 1999-2000 OHL All-Scholastic Team. After a successful career in the OHL, Chris attended the University of Western Ontario where he suited up for the men’s hockey team. Chris graduated from the prestigious Richard Ivey School of Business in 2006 and is now working as a Portfolio Manager with NewGen Asset Management Group.

Adam played four OHL seasons joining the Guelph Storm in 2002 and was a member of the club’s OHL Championship squad in 2004.  Selected by the Buffalo Sabres in the sixth round of the 2005 NHL Entry Draft, Adam played three seasons in the American Hockey League with Rochester and Portland before continuing his professional career overseas for five seasons in Italy and Austria.  Adam took advantage of his OHL scholarship completing courses at the University of Guelph and Western Ontario before pursuing a degree in Psychology through Athabasca University. Adam is now currently the Assistant General Manager & Assistant Coach of the North Bay Battalion.