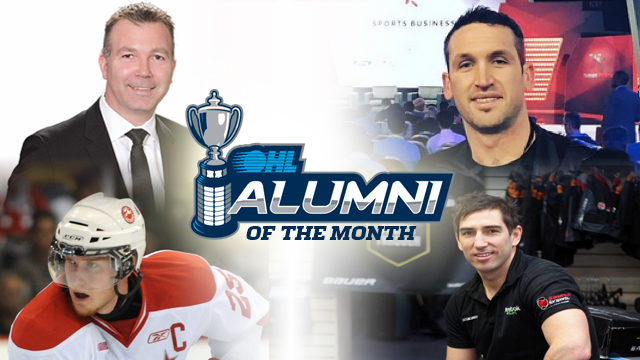 Sean Venedam, a native of Hanmer ON, played his entire OHL Career with the Sudbury Wolves during the mid-1990s, from 1993-1997.  His rookie season in 1993-94 started a few games into the season and he never looked back becoming captain of the team during 1995-96 and 1996-97.  Sean went on to play pro hockey throughout the U.S before a career ending injury to his ankle that eventually led to the amputation of his lower leg below the knee.  Sean is an optimistic person who sees the positive in every situation and has continued to follow his passion in sports opening up a Sports Retail business, 4Hundred Source4Sports in Barrie where he lives with this family.  Sean’s passion for hockey, his family and the community make Sean an outstanding Sudbury Wolves Alumni and Wolves Ambassador.

Mark Guy joined Newport Sports Management in 1997 one year removed from his graduation from The Ivey School of Business at the University of Western Ontario.  He was a member of the London Knights for three seasons and later enjoyed a further five-year, All Canadian career as Captain with the University of Western Ontario Mustangs.  Mark’s son was recently drafted in the 2017 OHL Priority Selection, 45th overall to the Sarnia Sting.

After beginning his first two seasons with the Ottawa 67’s and completing his final 2 seasons in the OHL with the Oshawa Generals, Shea decided to attend Dalhousie University in Halifax, Nova Scotia. An entrepreneur at heart, Shea spent four years completing his business degree, earned a spot on the Dean’s List, and was an Academic All-Canadian.  While playing in the U Sport’s AUS conference, and frustrated by the knee brace he was wearing after breaking a leg, he would help develop a more advanced brace through Spring Loaded Technology, a company he formed with two others, from which he has since sold the majority of his stake in the breakthrough knee-brace design and manufacturing company.  Shea played one more season at the University of New Brunswick in 2013-14 through an invitation to complete an MBA, and found his newest passion, a camera. UHWK (pr. you-hawk), a first-in-the-world camera design inspired and innovated for athletics.  From early success in his business endeavors, to TV appearances on shows like Dragon’s Den, Trailer Park Boys and Discovery Channel, Shea continues to work toward pushing his boundaries and living his dreams with goals to provide for and inspire others.

Brock played three seasons for the Greyhounds before finishing his career with Niagara and Guelph. In his final season with the Hounds (2010-11), he was named Captain for the clubs’ 39th season in the OHL. Brock was a 2nd generation Greyhound as his dad Jeff played for the Hounds as well. Brock is currently in his 4th year at UPEI pursuing a degree in Business Administration.

The second annual OHL Alumni Golf Tournament is scheduled for Monday June 5, 2017, at the Devil’s Pulpit in Caldeon.  Click here for more information and to register.