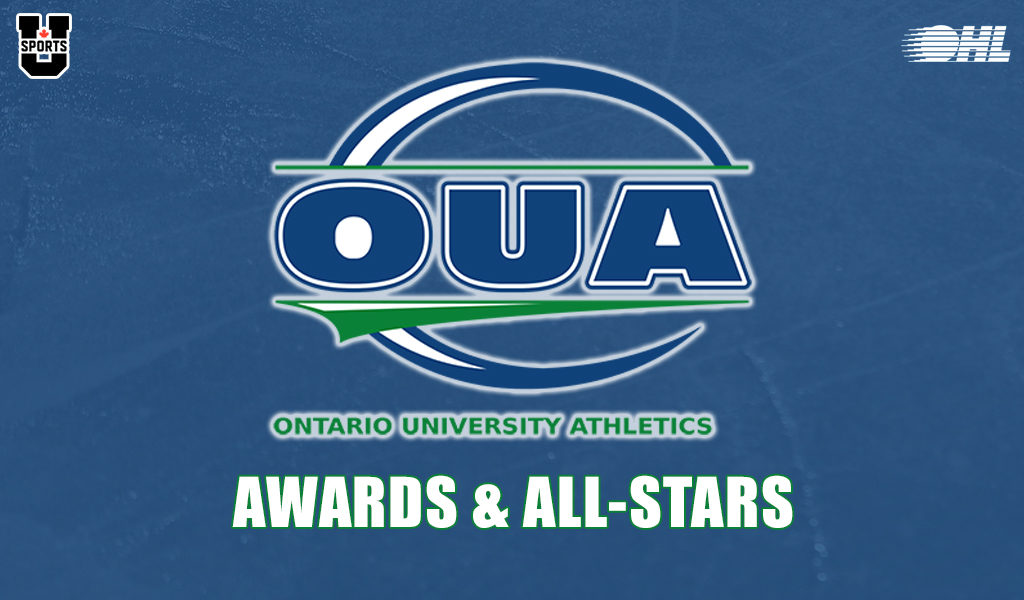 Most Valuable Player (East) and Rookie of the Year (East) – Chris Paquette (Niagara IceDogs, Peterborough Petes)
Former IceDog and Pete Chris Paquette of the Royal Military College Paladins was awarded in multiple capacities as both the Most Valuable Player and Rookie of the Year in the East Division. His maintained an above point-per-game stride in his rookie campaign, putting up 32 over 28 games, and led the Paladins in scoring with 15 goals and 17 assists to help his team to their first postseason appearance since 2006. Pacquette totaled 159 points over his 306-game OHL career and was drafted by the Tampa Bay Lightning in the fifth round of the 2016 NHL Draft.

Rookie of the Year (West) – Franco Sproviero (Sarnia Sting)
Looking toward the West Division, Franco Sproviero of the Western Mustangs also received Rookie of the Year honours. The Sarnia Sting graduate posted a team-leading 33 points in 24 games to finish atop the rookie scoring race. Sproviero played a full five-year season with the Sting from 2014-19, amassing 135 points over 214 games.

Defender of the Year (West) – Gregory DiTomaso (Mississauga Steelheads, Saginaw Spirit, Barrie Colts)
The West Division’s Defender of the Year award went to the Ryerson Rams’ Gregory DiTomaso, who led all defencemen with 20 assists and 26 points over the course of 28 appearances. The blueliner spent his OHL campaign with the Mississauga Steelheads, Saginaw Spirit and Barrie Colts, totaling 54 points over 187 games.

Randy Gregg Award – Anthony Stefano (Peterborough Petes, Windsor Spitfires, Barrie Colts)
Sproviero’s Western teammate Anthony Stefano earned the Randy Gregg Award, rewarding his excellence as a student athlete. The former OHLer, who spent time in Peterborough, Windsor and Barrie, was recognized for his accomplishments in combining athletics, academics, and involvement in the community. He finished out the season with five goals and 16 points while holding a leading role on the Mustang Athletics Student Council and participating in initiatives such as Student Mentors, Recess Guardians and SAMHI (Student Athlete Mental Health Initiative). Stefano is also a physiotherapy assistant at the Fowler Kennedy Sports Medicine Clinic at Western. He posted 165 points (69-96—165) in 249 games over four OHL seasons and led the Colts with 56 points (22-34—56) in his overage year.

Sixteen OHL grads will also be suiting up for the First and Second All-Star Teams and All-Rookie Teams for both divisions:

*Played with the QMJHL’s Gatineau Olympiques from 2017-19