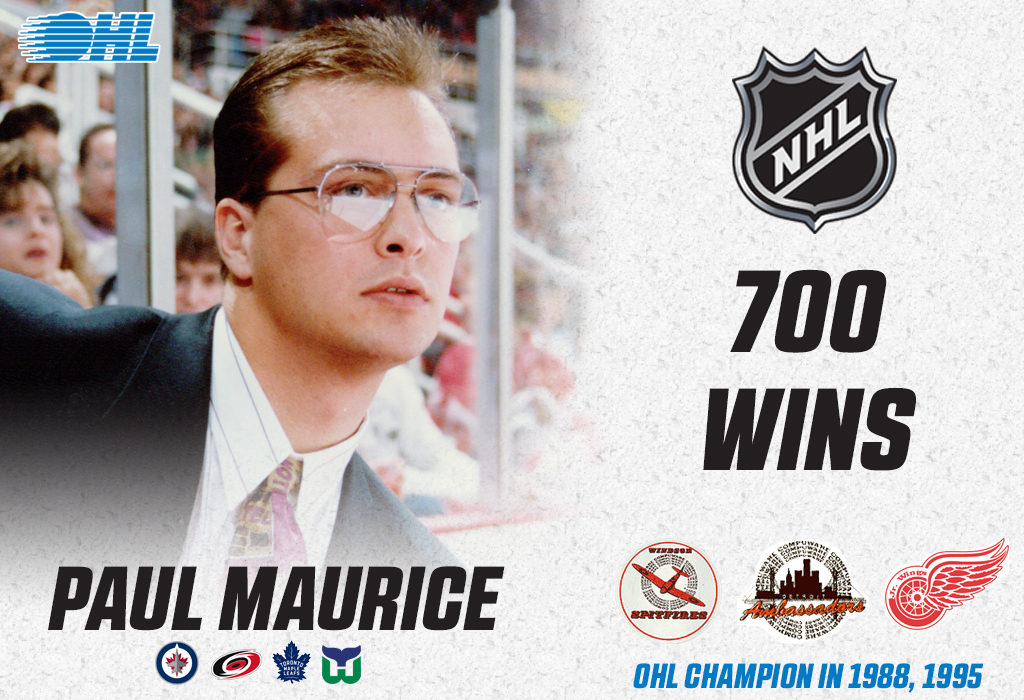 An accomplished OHL alumnus both on the ice and behind the bench, Paul Maurice became the seventh coach in NHL history to earn 700 career victories this past Sunday as his Winnipeg Jets defeated the Edmonton Oilers 1-0 in a shootout.

Maurice is in the midst of his 22nd season as an NHL head coach, a tenure that has included the past seven seasons with the Jets. The 52-year-old from Sault Ste. Marie, Ont. has also enjoyed coaching stints with the Hartford Whalers, Carolina Hurricanes and Toronto Maple Leafs dating back to his breakthrough into the NHL in 1995-96.

Congratulations to #NHLJets‘ Head Coach Paul Maurice on reaching 700 @NHL wins – one of only seven coaches in NHL history to do so! pic.twitter.com/Zhfwdv0eWN

Prior to that, Maurice split seven seasons as both a head coach and an assistant between the OHL’s Windsor Compuware Spitfires, Detroit Compuware Ambassadors and Detroit Jr. Red Wings, a run that culminated in an OHL Championship with a Wings team that featured Bryan Berard, Bill McCauley and Sean Haggerty in 1994-95.

Maurice patrolled the blue line with the Windsor Compuware Spitfires from 1984-88, suffering an eye injury that forced him behind the bench midway through his final season. Maurice worked as an assistant under head coach Tom Webster in 1987-88 as the Spitfires hoisted the J. Ross Robertson Cup as OHL Champions.

Following his 700th win on Sunday, Maurice cited Webster’s influence as a prominent one in the formulation of his career.

“Tom Webster would be the guy,” he said. “He was my junior coach who I eventually hired as an assistant coach in the NHL.

“He would absolutely be the man who influenced me the most. Really, really intense guy but a big family guy, very emotional guy. Systems. That was kind of the first time I heard of the word systems, like, ‘Hey, we’ve got a plan here.’ He won’t on the coach the New York Rangers, to coach the L.A. Kings.”

The Winnipeg Sun‘s Scott Billeck has the full story on Maurice’s recent accomplishment.

#NHLJets Paul Maurice becomes the 7th head coach in NHL history to record 700 career wins. He is the 2nd-youngest coach to reach the milestone behind Scotty Bowman. #GoJetsGo pic.twitter.com/VUIyWYZexF