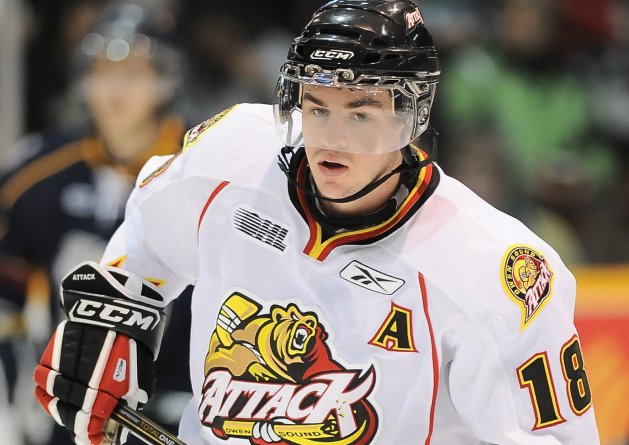 Toronto, ON – The Ontario Hockey League today announced the All-Star teams for the 2010-11 OHL regular season.

The Owen Sound Attack, who recently captured the Wayne Gretzky Trophy as Western Conference Champions, are represented the most on the First All-Star Team with two players including Colorado Avalanche first round pick Joey Hishon at centre, with captain and Florida Panthers prospect Garrett Wilson listed at left wing.  Matt Leyden Trophy winner Mark Reeds, the OHL’s Coach of the Year, is also on the first team.  Also representing the Attack as an All-Star is Toronto Maple Leafs prospect defenceman Jesse Blacker named to the third team.

Max Kaminsky Trophy winner and Nashville Predators prospect Ryan Ellis is the only player on any of the three All-Star teams who is a repeat winner.  He appears on the first team just as he did in 2008-09 when he last captured Defenceman of the Year honours.  Last season he was listed on the Second All-Star team.  Joining Ellis on the point for the first team this season is 2011 NHL Entry Draft prospect Ryan Murphy, while Top Scorer and co-recipient of the Eddie Powers Memorial Trophy and Los Angeles Kings prospect Tyler Toffoli of the Ottawa 67’s is listed at right wing.  Rounding out the first team in goal is OHL Goaltender of the Year and Phoenix Coyotes first round pick Mark Visentin of the Niagara IceDogs.