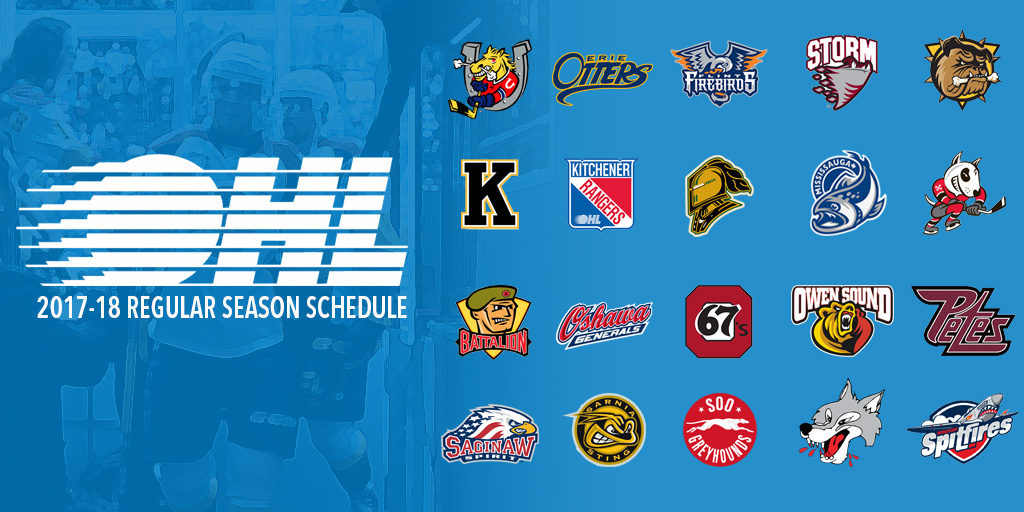 Toronto, ON – The Ontario Hockey League today announced the regular season schedule of games for 2017-18.

#OHLOpeningWeek begins on Thursday September 21 with three games on the schedule including the defending Mastercard Memorial Cup champion Windsor Spitfires at home to the Saginaw Spirit, the OHL champion Erie Otters on the road against the Peterborough Petes, along with the Barrie Colts hosting the Ottawa 67’s.  In total, #OHLOpeningWeek features 20 games through Sunday September 24 and includes 16 home openers.

The 2017-18 schedule includes 681 games this season due to a special interleague series between the Ottawa 67’s and the QMJHL’s Gatineau Olympiques.  As part of their 50th anniversary celebrations, the 67’s will play their cross-river neighbours twice including in Ottawa on Sunday December 17 and in Gatineau on Friday January 12 with both games counting towards league standing.

Other highlights of the 2017-18 regular season schedule include the raising of OHL Championship banners on Saturday September 30 in Erie as the Otters play host to the Kitchener Rangers for their home opener.  The schedule also includes eight School Day games with morning puck drops.  On Wednesday November 1 the Otters host the Rangers and the 67’s host the Kingston Frontenacs for 10:30 am contests, followed by a trio of morning matchups on Wednesday November 15 including the Flint Firebirds hosting the Sarnia Sting, the Hamilton Bulldogs hosting the Petes, and the Mississauga Steelheads hosting the Otters.  On Wednesday November 29 the Frontenacs host the 67’s at 10:30 am, on Thursday February 8 the Bulldogs host the Colts at 10:30 am, and on Wednesday February 14 the Steelheads host the Rangers at 11:00 am.  CogecoTV’s Hockey Day in the OHL returns for a fifth straight year taking place on Sunday January 28 with a broadcast tripleheader that features Niagara at North Bay at 1:00 pm, Peterborough at Kingston at 4:00 pm, then Sarnia at Hamilton beginning at 7:00 pm.  The two busiest days of the calendar include Thursday December 28 and Friday January 26 that both feature all 20 teams in action, while six different dates feature nine games including Sunday October 29, Friday November 10, Sunday November 19, Friday November 24, Friday February 2, and Family Day on Monday February 19 with every game beginning at 2:00 pm.

The regular season wraps up on Sunday March 18 with five games scheduled before the top eight teams in each conference will compete for the J. Ross Robertson Cup in the 2018 OHL Playoffs.

CHL Special Events this season include the CIBC Canada Russia Series in OHL markets on Thursday November 9 in Owen Sound, and Monday November 13 in Sudbury.  The 2018 Sherwin-Williams CHL/NHL Top Prospects Game is also hosted by the OHL this season and will be played on Thursday January 25 in Guelph.  The 2018 Mastercard Memorial Cup is set for May 17-27 in Regina, Saskatchewan, and will feature the OHL champion along with the host Pats, the Western Hockey League champion, and the Quebec Major Junior Hockey League champion competing in the 100th edition of the CHL’s prestigious national championship.

Divisional alignment remains the same for 2017-18 with all teams playing interdivisional rivals a minimum of six times including three games at home and three on the road, while teams will continue to play a minimum of one home and one road matchup against all 19 other clubs.

The Ontario Hockey League continues the tradition of being primarily a weekend league in order to accommodate the student athlete with over 89% (607) games scheduled between Thursday and Sunday.  Friday continues to be the busiest night during the season with 187 games scheduled, followed by 163 on Saturdays, and 157 on Sundays.

Day – No. of Games (Percentage)

DOWNLOAD A PDF COPY OF THE 2017-18 OHL REGULAR SEASON SCHEDULE.

Help promote the launch of the 2017-18 OHL Regular Season on social media by using #OHLOpeningWeek.