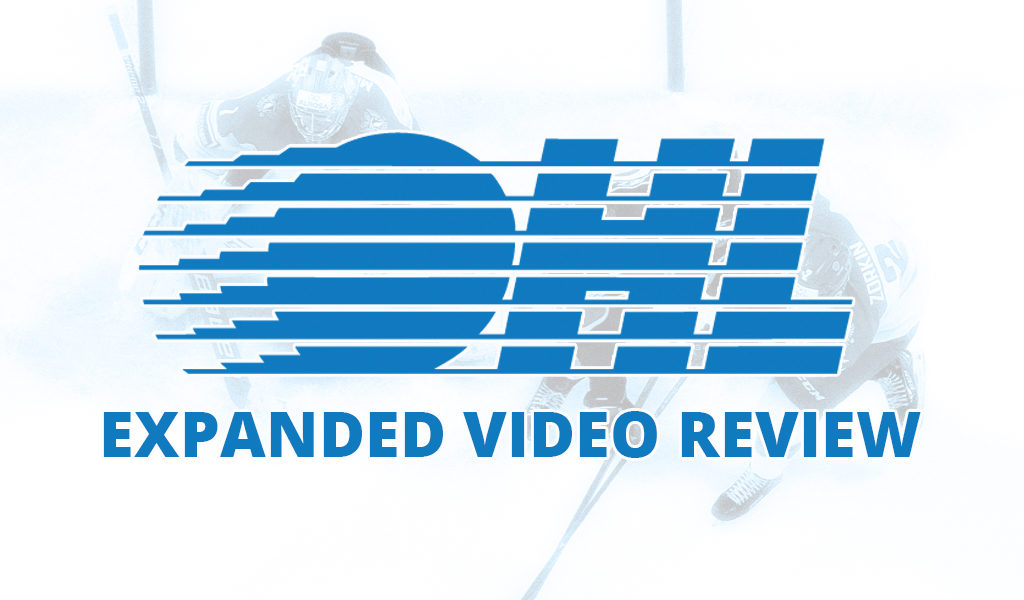 Toronto, Ont. – The Ontario Hockey League today announced that newly expanded video review measures will go into effect league-wide beginning with regular season games scheduled for tonight – Friday, November 15, 2019.
Technology enhancements introduced in all 20 OHL member team facilities include overhead cameras placed above each blue line in addition to the installation of new video tablets accessible to on-ice officials at the penalty box area.
The following expanded video review measures, which were adopted at the League’s Annual Meeting of the Board of Governors in August, will go into effect for tonight’s regular season games:

The addition of video tablets at the penalty box as well as the installation of new overhead cameras at each blue line will enhance accessibility to video review league-wide.

Video tablets will provide on-ice officials with an additional resource. Based on their discretion, referees and linesmen will have access to video review to ensure that the correct call on the ice was made as it relates to the assessment of major/match penalties, high-sticking double-minors as well as offside situations when a goal has been scored.

In the case of an assessed major or match penalty, referees shall automatically review such infraction on the tablet in the penalty box to substantiate the call (including whether such penalty was assessed to the correct player) or to reduce it to a double minor penalty (in the case of checking from behind), a two-minute penalty or no penalty at all.

In the case of an assessed double-minor for high-sticking, the referee will have the ability to conduct an on-ice review to confirm whether or not the stick causing the apparent injury was actually the stick of the player being penalized. The referee’s review will be discretionary and not mandatory and will be conducted without consultation of the video goal judge.

The use of enhanced video replay shall not be utilized to assess penalties that were not called in the first instance nor shall it be utilized to increase the severity of the major penalty called.

Each OHL member team shall have the ability to initiate a “coach’s challenge” in situations where goaltender interference is involved in a “goal” or “no goal” call.

Accessing video tablets in the penalty box, referees will be enabled to issue a ruling in the event of a coach’s challenge.

If the coach’s challenge does not result in the original call on the ice being overturned, the team exercising such a challenge will forfeit its timeout.

If the coach’s challenge does result in the call on the ice being overturned, the team successfully exercising such challenge will retain their ability to challenge an additional call for goaltender interference and will retain its timeout.

Only one coach’s challenge per team, per stoppage will be permitted.