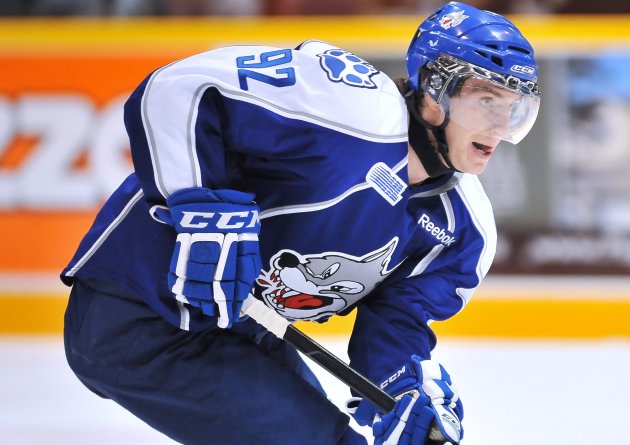 Toronto, ON – The Ontario Hockey League today announced the recipients of two of the league’s annual awards following the conclusion of the 2011-12 regular season.

For the first time since John Tavares of the London Knights in 2008-09 the Eddie Powers Memorial Trophy will be presented to an individual winner with Michael Sgarbossa of the Sudbury Wolves who led the league with 102 points in 66 games becoming the second member of the Sudbury Wolves to ever win the scoring title following Mike Foligno in the 1978-79 season.

The Eddie Powers Memorial Trophy was donated by the Toronto Marlboro Athletic Club in memory of Eddie Powers and was first awarded in 1945-46 to Tod Sloan of St. Michael’s who scored 79 points in 25 games.  Last season the award was shared by Tyler Toffoli of the Ottawa 67’s and Jason Akeson of the Kitchener Rangers with 108 points each, with Taylor Hall of the Windsor Spitfires and Tyler Seguin of the Plymouth Whalers sharing the honour in 2009-10.

Sgarbossa, a 19-year-old from Campbellville, ON, is playing in his fourth OHL season and scored a career high 47 goals and 55 assists.  The Colorado Avalanche prospect produced an impressive 29 multi-point games including a four-point game on the final day of the regular season scoring his third hat-trick of the season plus an assist as first star of a 5-1 win over the Kingston Frontenacs to take over the scoring lead.  Sgarbossa also recorded the second longest point-streak in the OHL this season with 19 games stretching from January 27 to March 6 where he collected 38 points.

For the second straight year Tyler Toffoli of the Ottawa 67’s claims the Jim Mahon Memorial Trophy as the league’s top scoring right winger with 100 points in 65 games.

The Jim Mahon Trophy was first presented following the 1971-72 season by the players and management of the Peterborough Petes in memory of their right winger Jim Mahon who was accidentally killed that summer.  Last season Toffoli shared the award with Jason Akeson of the Kitchener Rangers with 108-point seasons.  This is the fifth time a member of the 67’s has won the award with Matt Foy earning the honour prior to Toffoli in 2002-03 with 132 points.

Toffoli, a 19-year-old from Scarborough, ON, is playing in his fourth OHL season with the 67’s.  Last year’s scoring champion led the league with 52 goals becoming the first player to reach the 50-goal benchmark in back-to-back seasons since former 67’s forward Corey Locke in 2003 and 2004.  The Los Angeles Kings prospect had 27 multi-point games including two five-point performances.