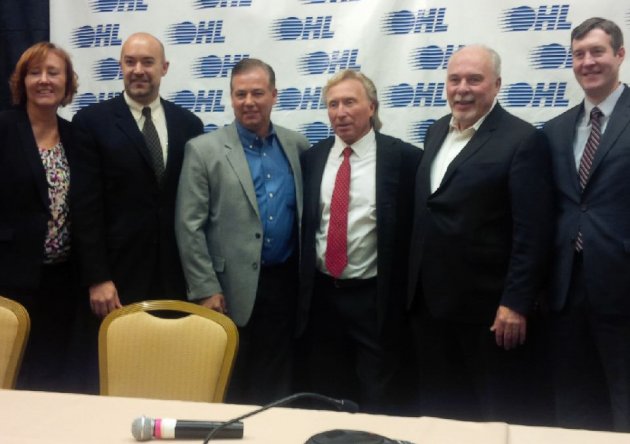 Toronto, ON – The Ontario Hockey League today announced the Board of Governors’ approval for the Transfer of Ownership and Relocation of the Plymouth Whalers Hockey Club to Flint, Michigan.

The Whalers franchise, which began as the Detroit Ambassadors in 1990 under the ownership of Peter Karmanos Jr, have been in Plymouth since 1996.  The club will relocate to Flint, Michigan, for the start of the 2015-16 OHL season and play out of the Perani Arena under the ownership of Rolf Nilsen of IMS Hockey Corporation.

“On behalf of the Ontario Hockey League and our Board of Governors I would like to acknowledge the contributions made by Peter Karmanos Jr who has been a tremendous builder of our league for over 30 years and was instrumental in our first expansion to the United States,” said OHL Commissioner David Branch.  “We are excited to welcome Rolf Nilsen and the communities of Flint, and Genesee County, Michigan, to the OHL family.”

In addition, a presentation was made to the OHL Board of Governors in regards to the proposed Transfer of Ownership of the Sarnia Sting Hockey Club from Rob and Larry Ciccarelli to OHL graduates Derian Hatcher and David Legwand.  The league is currently conducting its process in review of the Transfer of Interest Application.

About the Ontario Hockey League

The Ontario Hockey League is comprised of 20 member teams, 17 in Ontario, and three in the United States, and is the number one development league in the world for players to the National Hockey League and Canadian Interuniversity Sport.