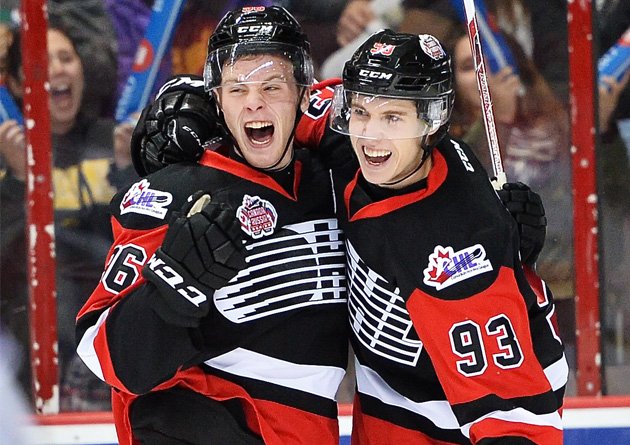 For the first time since 2009, the Canadian Hockey League has managed to clinch the CHL Canada Russia Series title in just four games as Jordan Kyrou (Sarnia Sting) and Spencer Watson (Kingston Frontenacs) had goals in a 2-1 Team OHL victory at the WFCU Centre in Windsor.

Monday’s win along with a 3-0 blanking of Russia in Owen Sound on Thursday follows up a pair of Team WHL victories to give the Canadian Hockey League the series title with a 12-0 advantage in points and just two games remaining.

Team OHL outshot Russia 38-22 in the victory, holding them to just one goal over two games as Michael McNiven (Owen Sound Attack) and Dylan Wells (Peterborough Petes) picked up where Mackenzie Blackwood (Barrie Colts) left off on Thursday.

“Everyone was great tonight, goaltenders included,” said Team OHL head coach Rocky Thompson post-game. “It was a great effort and there was a lot of talent out there.”

Russia weathered an early storm as goaltender Alexander Trushkov rebounded from a rough outing in Game 1 of the series in Kelowna. Team OHL outshot the Russians 7-0 in the opening seven minutes before running into penalty trouble, providing their opponent with a two man advantage.

The Russians would capitalize, taking their second lead of the series as Kirill Pilipenko camped out to the right of McNiven’s crease, banging home a one-timer on a cross-crease pass from Daniil Vovchenko at 7:27.

The OHL tested Trushkov throughout the remainder of the first as defenceman Victor Mete (London Knights) couldn’t solve the goaltender on a quick rush down the right wing and Arizona Coyotes prospect Brendan Perlini (Niagara IceDogs) wasn’t able to slip a low attempt under the pad.

Team OHL benefitted from some great goaltending in the opening half of the second. McNiven turned away both Alexander Protapovich and Artur Lauta in the same shift before his night came to an end midway through the period after stopping 11 of the 12 shots he faced.

Wells entered the game just before his club got on the board with draft eligible winger Jordan Kyrou (Sarnia Sting) being in the right spot at the right time. Kyrou banged in a rebound off the pad of Trushkov at 9:12 after defenceman Kyle Capobianco (Sudbury Wolves) sent a puck toward the goal, getting a lively Monday night crowd in Windsor up onto their feet for the first time.

Los Angeles Kings prospect Spencer Watson continued his strong CHL Canada Russia Series under two minutes later, putting the OHL ahead for good on the powerplay. Toronto Maple Leafs first rounder Mitch Marner dished the puck to Watson in the high slot as he pulled the trigger on a quick release over the shoulder of Trushkov at 11:02, giving him his third goal of the series.

Wells kept Team OHL ahead through the rest of the second, providing his best save of the night with just under three minutes on the clock. The draft eligible netminder who helped Canada win gold at the Ivan Hlinka Tournament this past summer got his blocker on a quick release by Russian winger Semyon Afonasevsky as he blazed through the middle.

An effective third period effort from the OHL squad limited Russia to just seven third period shots, with Wells providing his biggest save off defenceman Kirill Tsulygin midway through the frame to preserve the one goal edge.

Trushkov kept his club within contention at the other end, making nine third period saves and a total of 36 on the night to earn player of the game honours for his team. London Knights forward Mitch Marner earned player of the game recognition for Team OHL.

“Mitch is a special player,” said Thompson. “He makes everybody around him better. I think I was better on the bench,” he said with a laugh. “It was a lot of fun to see him up close along with other really talented guys like Watson and Chychrun.”

“It was a fast-paced game and we all knew it would be,” said Marner. “We know what the Russians can bring but we were able to match them tonight. It’s pretty special when you can represent the OHL this way.”

Game 5 of the 2015 CHL Canada Russia Series shifts to Rouyn-Noranda on Tuesday as Team QMJHL takes to the ice for the first time in the series. They’ll be out to settle the score with Russia after being narrowly defeated in a deciding Game 6 last year in Rimouski.

Tuesday’s action can be seen live from Rouyn-Noranda on Sportsnet East, Ontario and Pacific as well as on TVA Sports at 7:00pm ET.