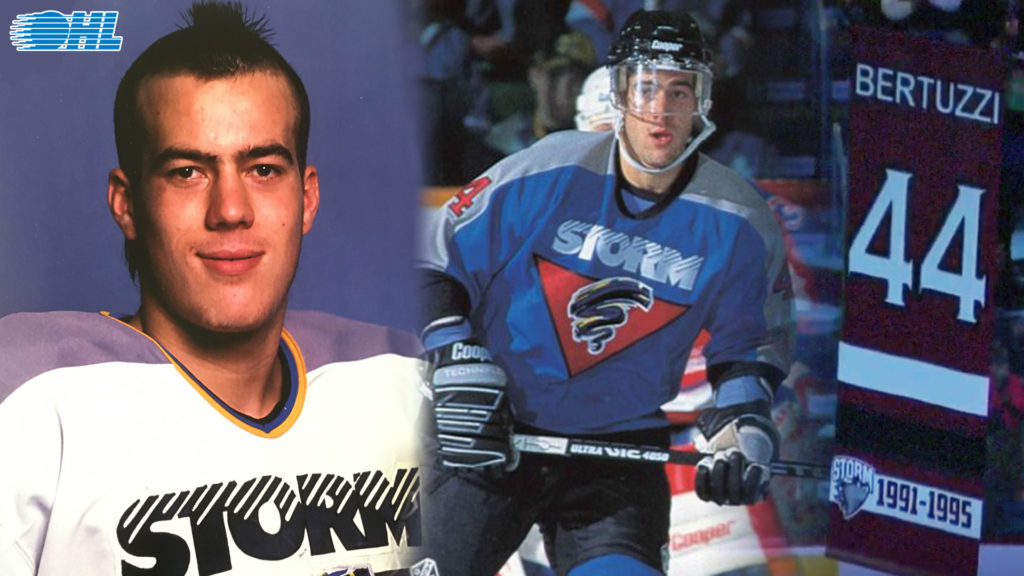 The transformation of Todd Bertuzzi ran a parallel line with that of the Guelph Storm.

Bertuzzi came into the league as a gangly rookie and the first pick for the fledgling team that moved from Hamilton that summer. It was clear that Bertuzzi – and the Storm – had all of the potential in the world. They just needed some experience.

Bertuzzi scored a modest seven goals and 21 points in 47 games as a freshman, but was already developing a reputation as a feared competitor. The team won just four games that year, but used the building blocks from the draft to become a formidable opponent.

Bertuzzi bumped his scoring totals to 27 goals and 58 points as a sophomore, helping the Storm to a dramatic turnaround that left them three wins under the .500 mark. That summer, the New York Islanders grabbed Bertuzzi with the 23rd overall pick in the draft.

The following season, Bertuzzi scored 28 times and pushed his point total up to 82, while the team had matured into an upper-echelon squad. Emerging star Jeff O’Neill was among the league’s top scorers and helped identify the Storm as a title contender.

By his fourth and final season with Guelph, Bertuzzi had filled out his 6-foot-3 frame and was a physically imposing force. His offensive game also took a huge step forward under new coach and former OHL and NHL star Craig Hartsburg. Bertuzzi scored 54 goals and 119 points playing beside O’Neill and carried the team on his huge shoulders into the OHL Final.

“When we had Bertuzzi in Guelph, he was a player who I felt I should have been paying to watch,” said GM Mike Kelly, who was hired by the Storm shortly after the move from Hamilton was finalized.

Bertuzzi scored 15 goals and 33 points in their march through the playoffs, before Guelph dropped the final series to the Detroit Jr. Red Wings in six games. Despite the loss, the Storm had clearly joined the OHL’s elite teams. They made it to the finals in two of the next three years, including 1998 when the team won its first OHL championship. Bertuzzi was an early key to building that tradition.

“Playing in Guelph was probably the best experience of my life,” said Bertuzzi. “Hockey was hockey. It was enjoyable and it didn’t come with any of the distractions that have come with playing in the NHL. I met a lot of great guys and had a lot of fun. It was a great organization in Guelph.”

Even as a 16-year-old rookie, the sight of Todd Bertuzzi bursting down the wing with the puck was a fear-inducing sight for even the bravest OHL defenceman. But the Sudbury native also had a softer side. He spent a lot of his free time in Guelph reading to school children and helping charities.

“I don’t think he wanted a lot of people to see that side of him,” said long-time Storm Governor Jim Rooney. “It was a much softer side of him than people were used to seeing on the ice. Off the ice, he was a big teddy bear.”