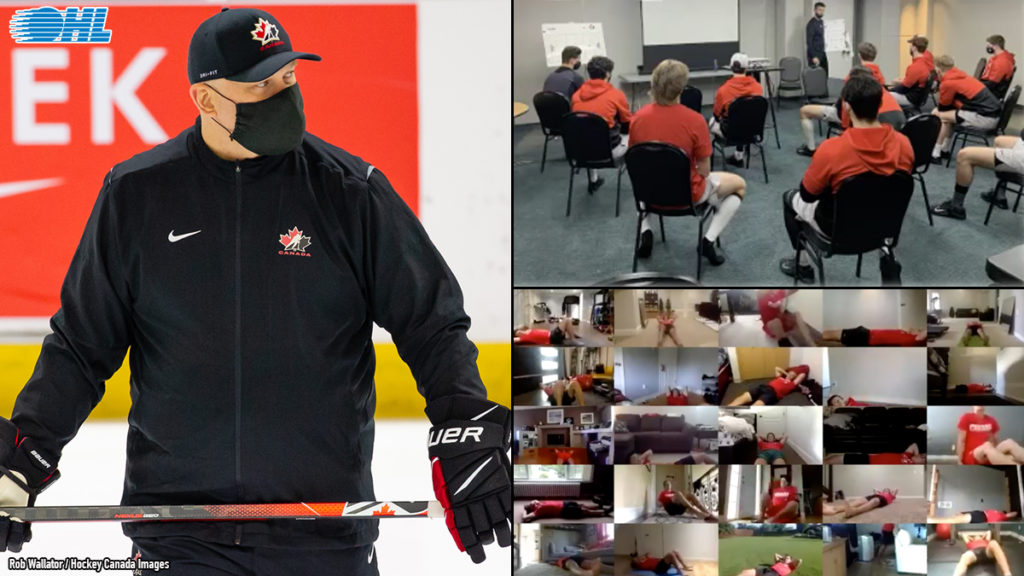 The 2021 World Juniors were unlike any other, with the best laid plans being switched up on the fly as circumstances rapidly changed in the midst of COVID-19 challenges.

Hockey Canada Senior VP of National Teams Scott Salmond along with National Junior Team head coach Andre Tourigny and their staff made the best of a difficult situation in Alberta, coming away with a silver medal and a host of new technological tools to be employed in future World Junior quests for gold.

On Wednesday, hockey operations staff from across the OHL’s 20 member teams demonstrated their continued eagerness to grow and evolve in the midst of a pandemic that has delayed puck drop on the 2020-21 season into the month of February.

Team Canada had a special guest join them virtually at the end of yesterday’s practice as #Oilers captain Connor McDavid had the honour of announcing their leadership trio. @HC_WJC | #WorldJuniors https://t.co/VPOZol99bM

Approximately 75 OHL coaches and general managers assembled on Zoom to hear from Salmond, back-to-back OHL Coach of the Year Tourigny, National Junior Team assistant coach Tyler Dietrich of the Saskatoon Blades, as well as National Teams Manager of Video & Analytics James Emery elaborate on the technological innovations that aided their rocky course through the planning and execution of the 2021 World Juniors.

“We’ve got to join the movement,” Tourigny said during his presentation. “A year ago James (Boyd) and Jan (Egert) in Ottawa talked to me about all of these new ways of doing things and I wasn’t really interested, but the pandemic forced us to change the way we do our job. There are so many technology options in front of us.

“It was hard to challenge ourselves that way,” Tourigny continued. “But I’m glad we did it. I learned a lot and I’ve realized how much this really improves the experience for the players and helps us to develop them better.”

Tourigny spoke at length on the impact of Zoom Video Conferencing and the way it was utilized over the course of 53 days inside the bubble. With over 50 team Zoom meetings and countless one-on-one exchanges, the platform enabled the Canadian brass to bring on special guest speakers such as Canadian UFC legend Georges St. Pierre, Olympic gold medalist Scott Niedermayer and TSN broadcaster Gord Miller, have parents call-in to make life-changing roster announcements to their sons and also gave the players an outlet to battle it out in highly competitive rock-paper-scissors tournaments to pass the time.

SPECIAL GUEST | @arkellsmusic frontman @Max_Kerman made the #WorldJuniors players part of his birthday Monday night — joining the team over video call to share words of wisdom.

“We’re in another generation,” Tourigny said of the way video-conferencing technology was utilized throughout camp and into the event. “For coaches like us, being on Zoom is interesting, but we’d rather be doing something like this in person – it’s just what we are used to. For these players, things like Zoom and FaceTime are what they are used to and they are very comfortable using these things. There’s also no way we ever get some of the guest speakers we got to hear from to come to our camp and speak to the kids face-to-face. This opens up a whole new opportunity.”

Tourigny touched on other tools such as ‘Coaching2Connect’, a platform he and his staff use in Ottawa that helps assess the personalities of players and staff, opening a window into better understanding how positive interactions can be shaped to yield the best results.

Players and staff in Alberta were in constant communication through WhatsApp, a mobile app that hosts one-to-one and group text and video messaging. The National Junior Team also utilized an app provided by HONE, a company based in Calgary that has worked in conjunction with Hockey Canada mental performance consultant Ryan Hamilton. The app serves as a tool that allows coaches and management staff to monitor the team’s mental health status through anonymous survey submissions every few days. This app would prove invaluable to the group over the course of a lengthy 18-day quarantine period of players being confined to their hotel rooms in Red Deer.

Canadian country music star @BrettKissel is the #WorldJuniors hockey fan in all of us! ❤️🇨🇦

He joined the team via Zoom to chat and play a couple songs. 🎼 pic.twitter.com/XFVyl3Iu4t

Dietrich and Emery touched on advancements in video technology used to monitor team practices throughout the evaluation period and shared positive reviews of their experience with the NHL’s ‘Hawkeye’ video system that was rigged up at Rogers Arena in Edmonton. They also discussed the use of ‘Catapult’ a platform being increasingly used by strength and conditioning coaches to monitor player rest and recovery times, measure player workload and output, and help coaches make informed decisions based off those metrics.

“The use of technology is great,” said Salmond, “but you can’t make the most of it without really great people. Without the quality of people around the program, we wouldn’t have had a chance.

“I’ve learned a whole bunch through his pandemic,” he continued. “Not all of it is bad. There are things that we’ll take and continue to use with our teams. At the end of the day, I think it’s the greatest silver medal we’ve ever won.”

Like Canada’s National Junior Team, OHL clubs have challenged themselves to broaden their technological horizons in light of the past year’s events, with each engaging in team video conferencing to some degree or another.

The start of the 2020-21 season remains undetermined, but one thing is for certain, OHL clubs are thinking in new ways about the intersection of hockey and technology, something that will only serve to enhance development of players league-wide.