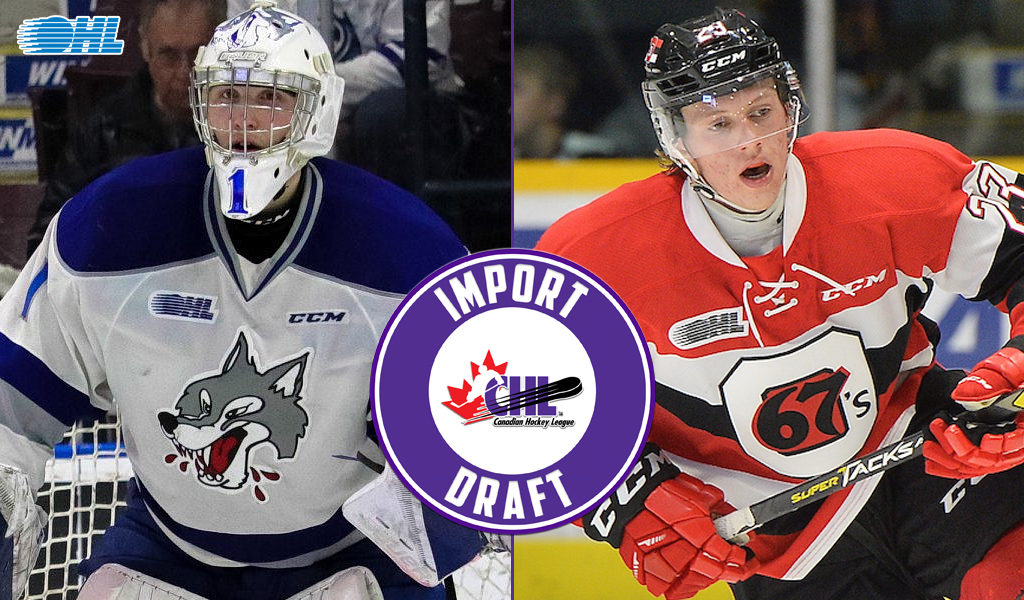 The CHL Import Draft has always been a big day on the calendar for OHL clubs, marking an opportunity to add a player or two who can make an immediate impact in the upcoming season. This year’s selection is set for Tuesday June 30th starting at 11:00am, with pick-by-pick coverage at both chl.ca and ontariohockeyleague.com. It’ll be a unique edition of the event this year, as CHL clubs will make their selections prior to the NHL Draft taking place.

While some teams have taken the approach of identifying younger international talent to add to their depth chart, others have turned to 19-year-olds who can step in and serve as cornerstones in a contending cause.

A decade of #CHLImportDraft talent:

Svechnikov, Draisaitl, Luukkonen, Hischier, Baertschi are just some of the #CHL names in our list of notable selections made inside the opening 20 picks between 2010-19.

The Sudbury Wolves went the veteran route in 2019, selecting Buffalo Sabres prospect Ukko-Pekka Luukkonen with the third overall pick. The 6-foot-5 goaltender went on to become the first import player to earn the Red Tilson Trophy as the OHL’s Most Outstanding Player, pairing that with OHL Goaltender of the Year honours as the result of a 38-11-2 season with a franchise record 2.50 goals-against average and six shutouts. Luukkonen would backstop Finland to World Junior gold while helping the Wolves win at least 40 games for the first time in 24 years.

The Ottawa 67’s perfected the younger approach in the same draft, selecting 17-year-old Marco Rossi with the 18th overall pick. The Austrian talent made an immediate impact, recording 65 points (29-36–65) over 53 games before helping the Barber Poles reach the OHL Championship Series, producing 22 points (6-16–22) in 17 playoff games. The 5-foot-9 centre returned for another run in 2019-20, giving the OHL back-to-back Red Tilson Trophy recipients of European descent as he racked up a CHL-leading 120 points (39-81–120) over 56 games along with a plus/minus rating of plus-69. Rossi enters the 2020 NHL Draft as the sixth ranked North American skater on NHL Central Scouting’s final rankings.

A group of first year European forwards showed promise this past season including mid-season recruits Martin Chromiak of the Kingston Frontenacs who was the second overall pick of last year’s CHL Import Draft. Belarusian teammate Vitali Pinchuk gave the Frontenacs a pair of strong import additions, leading to the club’s announcement that it will be passing on this year’s selections with the anticipated return of both players for 2020-21.

Hamilton Bulldogs centreman Jan Mysak joined the club after representing his native Czech Republic in the World Juniors. Mysak slotted in for an injured Jan Jenik and collected 25 points (15-10–25) over 22 games, finishing the season as the 28th ranked North American skater ahead of the upcoming NHL Draft. Oshawa Generals Finnish-born winger Oliver Suni and countryman Ruben Rafkin, who patrolled the blue line for the Windsor Spitfires, also had strong campaigns as did Russian winger Andrei Bakanov of the Guelph Storm. Last but certainly not least, Flint Firebirds winger Evgeniy Oksentyuk burst onto the scene after being the fifth overall pick last June. The skilled Belarusian winger posted 78 points (33-45–78) in 58 games to lead the Firebirds in scoring.

The North Bay Battalion hold the first overall pick in Tuesday’s proceedings, marking the first time they’ve had the honour in the franchise’s history. The Niagara IceDogs will follow at fourth overall while the Sarnia Sting pick seventh and the Soo Greyhounds select 10th.