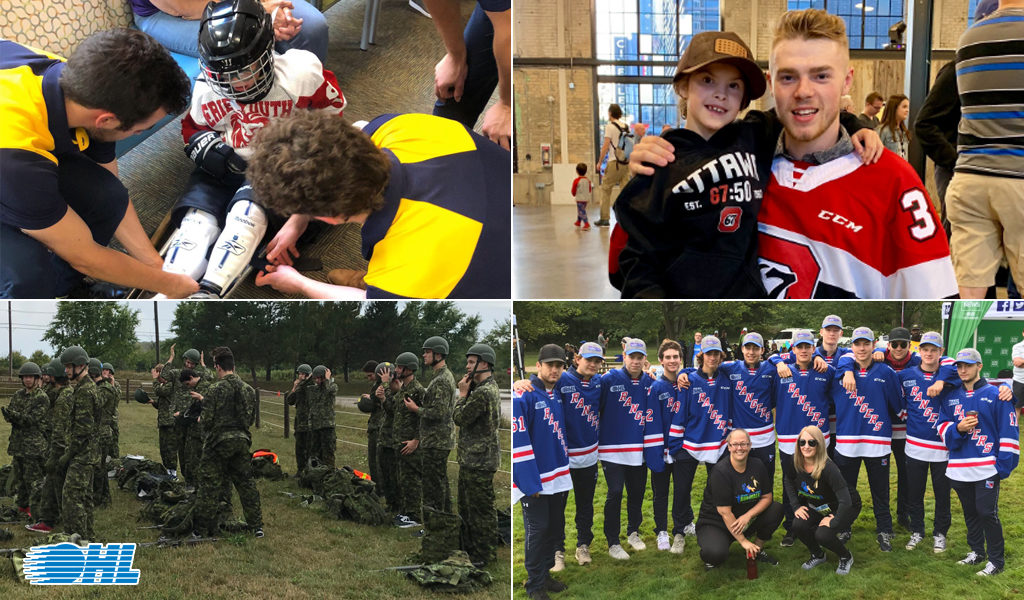 With rosters a little thin with all of the players currently off at NHL Rookie Camps this past week, OHL clubs took advantage of some free time engaging fans and the surrounding community.

It was a quiet weekend on the ice, but OHL teams were still busy. Here’s a quick look at what took place.

The Kitchener Rangers held their annual season ticket holder barbecue and even participated in a five kilometre walk/run benefitting the Pediatric Oncology Group of Ontario.

“To have this interaction, this relationship with the fans, it’s awesome.” – @mikevukojevic #RTown #Kitchener #OHL pic.twitter.com/r0ZkxAw5xV

The Erie Otters have rallied behind their neighbours, the Erie SeaWolves baseball club, donating a team-signed jersey to the Chace Numata Fund auction. Numata, a 27-year-old catcher for the SeaWolves who are the ‘AA’ affiliate of the Detroit Tigers, passed away tragically this past week as the result of a skateboarding accident.

Big thank you to the @ErieOtters for donating a team-signed jersey. Now available in the Chace Numata Fund auction. Proceeds benefit the Numata family.

We had a great time helping out with equipment fittings with our friends from the Mighty Otters Sled Hockey Team! #MyEriepic.twitter.com/NlHH1z7sua

The Ottawa 67’s had fun with fans, kicking-off their season with a giant inflatable slide and team autograph session. The team then attended an Ottawa REDBLACKS CFL football game on Saturday.

It might be early in the season but your Petes are already hard at work in the community! This morning we’re sorting donations and packing boxes at @Kaw_FoodShare. pic.twitter.com/depCRqPJeF

The Guelph Storm recently hosted their annual season ticket holder barbecue as players signed autographs and met their loyal supporters. Everyone was in good spirits as the event game after a 5-2 win over the Mississauga Steelheads.

Thank you to everyone who came out to the Season Ticket Holder BBQ! 🍔🌭#IamtheSTORMpic.twitter.com/SqK6vqjwap

The London Knights welcomed season ticket holders young and old to a team skate this past weekend. Players were decked out in their brand new green Knights jerseys that will be on full display in the club’s home opener on Friday September 20th.

You asked, we delivered.

Figured we should get the boys to unveil the new bus wrap with our friends at @OntNorthland 🔥 pic.twitter.com/zeaGXuCuVY

The Owen Sound Attack did some team-building exercises this past week, making a trip to 4th Canadian Division Training Centre in Meaford, Ont.  The players participated in group activities that enforce the importance of teamwork and dedication.

A giant thank you to the 4th Canadian Division Training Centre in Meaford for having the Owen Sound Attack!

Our time there teaches the importance of teamwork and dedication. We can’t thank you enough for the help heading into the season! #MadeForMorepic.twitter.com/LryB67GsCO