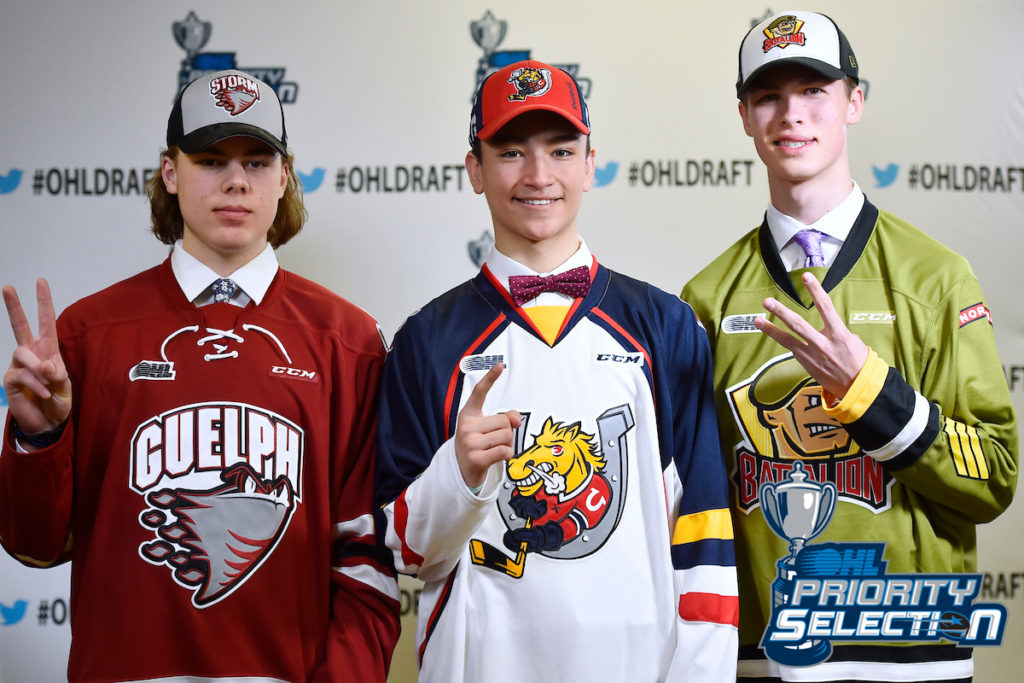 A total of 300 players were selected in the 15-round process from 89 different teams across Ontario and parts of the United States.  The selected players included 170 forwards, 98 defencemen, and 32 goaltenders.  While 295 of the players chosen were 2001-born athletes, also eligible for selection were non-overage players not carded with an Ontario based Midget AAA team from protected OHL territories.  Five players born in 2000 were chosen under this criteria.

“Congratulations to all 300 players chosen in the 2017 OHL Priority Selection, their family, friends, and minor hockey coaches and organizations who have all provided support and encouragement, while assisting with the development of these student athletes,” said Darrell Woodley, Director of OHL Central Scouting. “Being selected by an OHL team is a great accomplishment but it’s also just the beginning of your road to the next level.  Opportunities for success are available for players with the right attitude and work ethic, including players not selected today, who may find success through next year’s Under-18 Priority Selection.  Best of luck to all players in pursuit of your hockey and academic goals.”

The Ontario Minor Hockey Association led the way 83 players from 22 teams including 48 who compete among 12 ETA teams, and 35 from 10 different SCTA teams.  The Quinte Red Devils led the OMHA with 10 players selected, followed by the Brampton 45’s, Hamilton Jr. Bulldogs, and league champion Whitby Wildcats each with eight players chosen.  The Greater Toronto Hockey League was represented by 82 players from 11 different teams led by the Toronto Marlboros with 13 players, followed by the OHL Cup champion Mississauga Reps with 11, and the league champion Mississauga Rebels with 10.  The ALLIANCE had a total of 46 players selected from 12 different teams led by league champion London Jr. Knights with 11 players, followed by the Waterloo Wolves with eight, and the Cambridge Jr. Hawks with seven.  Hockey Eastern Ontario was represented by 19 players on eight different Midget AAA teams including five players from the Cumberland Grads.  The Northern Ontario Hockey Association had eight players chosen from three different teams including five members of the North Bay Trappers, while five players were selected from Hockey Northwestern Ontario including four on the Thunder Bay Kings.  An additional three players were chosen from various Canadian programs with the remaining 54 players representing 28 different teams from the United States including seven players from Detroit Belle Tire, six from Chicago Mission, and five from Detroit Honeybaked.

This season marked the 17th straight year the Priority Selection was conducted by way of the internet, and tenth straight year with a live draft show of the first three rounds.