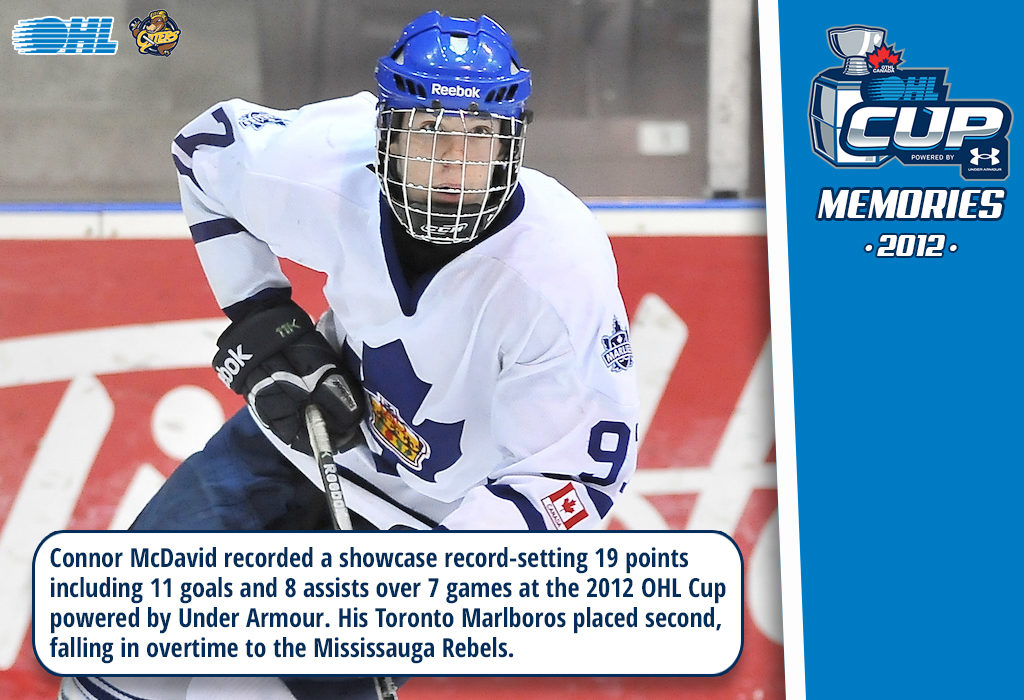 Before he was impressing with the Erie Otters and Edmonton Oilers, Connor McDavid was turning heads at the 2012 OHL Cup Powered by Under Armour.

Following a 209-point minor midget season (79-130—209) with the GTHL’s Toronto Marlboros as the league’s Player of the Year, the Newmarket, Ont. native led his team to the OHL Cup Championship Final, where they ultimately fell 2-1 at the hands of the Mississauga Rebels. The star centreman led the Marlies’ showcase with a record 19 points over seven games, registering 11 goals and eight assists to secure the Tim Adams Memorial Trophy with the most points since Sam Gagner’s 17 point showing with the Marlboros in 2005. His showcase was headlined by two hat-tricks and a five-point game.

McDavid, who was granted exceptional status as a 15-year-old, was drafted first overall by the Erie Otters weeks later at the 2012 OHL Priority Selection and went on to have a decorated OHL career, capturing numerous awards and earning gold medals with Team Canada at the 2013 U18 World Championship as well as the 2015 World Juniors. The Edmonton Oilers selected him first overall at the 2015 NHL Draft where he has been highly productive ever since, earning the Calder Memorial Trophy as the NHL’s Rookie of the Year in his first season and surpassing 100 points three straight times.

With the 2020 OHL Cup Powered by Under Armour being cancelled in light of the ongoing COVID-19 outbreak, we’re spending the week taking a look back at some of the top OHL Cup performances from years gone by.