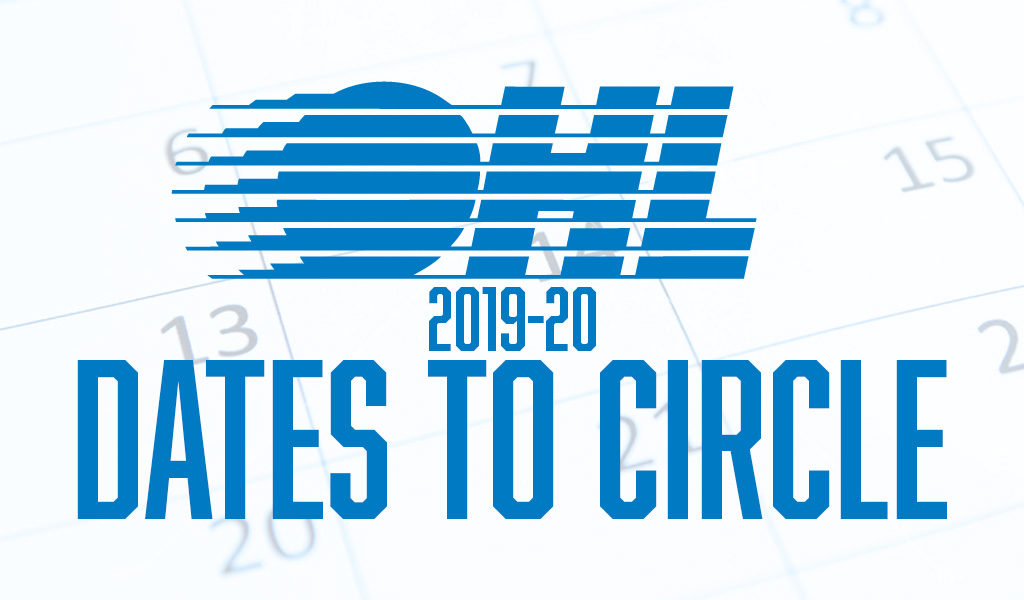 The weather is warming up outside but teams across the Ontario Hockey League are busily laying the groundwork for another season as the 2019-20 regular season schedule was announced on Tuesday.

It’ll be tough to top the excitement of the Guelph Storm’s unforgettable championship run, but the 40th season under the ‘Ontario Hockey League’ banner features a number of dates that fans can already circle ahead of puck drop on Thursday September 19th.

1. Thursday September 19th – Opening Night in Niagara
The Niagara IceDogs and Sudbury Wolves fought into the final month of the 2018-19 season for Central Division supremacy and the host IceDogs will have a banner to raise on Opening Night as the 2019-20 season kicks off in St. Catharines. The host IceDogs boast two of the league’s quickest forwards in Akil Thomas and Philip Tomasino. The Wolves return with plenty of firepower in reigning OHL Rookie of the Year Quinton Byfield entering his draft eligible season.

2. Friday September 20th – Storm celebrate OHL Championship on nine game Friday night
The first big night of the 2019-20 schedule sees an OHL Championship Series rematch as the Ottawa 67’s visit the Guelph Storm. The puck drops in eight other games around the league as the Storm will raise their Robertson Cup banner to the rafters before taking on the defending Eastern Conference champion Ottawa 67’s.

4. 67’s and QMJHL’s Gatineau Olympiques meet for third straight season
Cross-river rivals the Ottawa 67’s and QMJHL’s Gatineau Olympiques will go head-to-head for a third straight season. The two clubs square off in a weekend home-and-home on Friday December 6th in Gatineau and Sunday December 8th back in Ottawa. In four meetings since rekindling their rivalry in 2017-18, both teams have won twice.

5. Saturday December 28th/Friday January 31st – All 20 member teams in action
The 2019-20 schedule includes two dates in which all 20 OHL member teams are in action. The second half starts with a bang as a full schedule gets things started back up again after the holiday break on Saturday December 28th. January comes to an eventful end with 10 contests on the Friday January 31st schedule.

6. Tuesday December 31st/Wednesday January 1st – Busy New Year’s Eve before 67’s, Generals carry OHL into 2020
It’ll be a busy New Year’s Eve as 14 OHL clubs are in action before the turn of the calendar. Fans in North Bay, Windsor, Hamilton, London, Niagara, Erie and Barrie can take in New Year’s Eve action. An Eastern Conference Championship Series rematch carries the OHL into the 2020’s as the Ottawa 67’s visit the Oshawa Generals for a Wednesday matinee.

7. Sunday January 26th – YourTV Hockey Day in the OHL Triple-header
YourTV hosts its 7th annual Hockey Day in the OHL offering back-to-back-to-back action live across the province. The action begins at 1:00pm as the Hamilton Bulldogs host the Peterborough Petes and North Bay Battalion take on the Soo Greyhounds. At 4:05pm the Windsor Spitfires visit the Sarnia Sting. The Niagara IceDogs visit the Kingston Frontenacs to close things out at 7:00pm.

9. Sunday March 22nd – Six games wrap-up regular season
Six games, all featuring in-conference matchups will wrap-up the 2019-20 OHL schedule with the potential for some close finishes to determine the final standings ahead of the 2020 OHL Playoffs. Circle your calendars for season-ending action in Kingston, Mississauga, North Bay, Erie, Sault Ste. Marie and Oshawa.