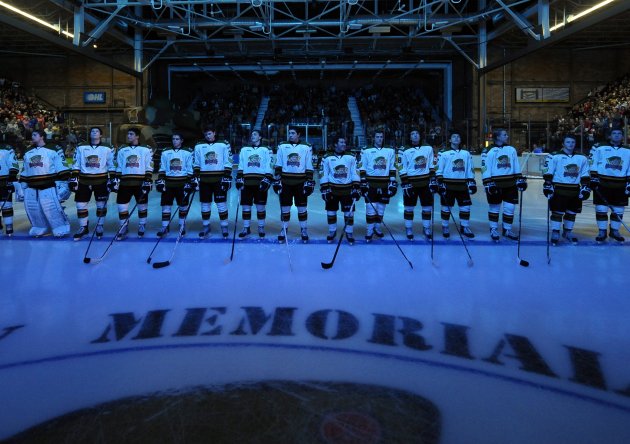 The North Bay Battalion don’t have to look far for inspiration to continue with their impressive first season in Northern Ontario. In fact, all they have to do is look up. The North Bay Memorial Gardens still houses the Leyden Division championship banner that the North Bay Centennials won for the 1993-94 season. They went on to win the Robertson Cup under coach Bert Templeton and two decades later Battalion coach Stan Butler is hoping to do the exact same thing.

“I didn’t realize the last time (North Bay) won a division was when Bert coached in 1993-94,” Butler told the North Bay Nugget after Friday’s 5-3 win over the Sudbury Wolves that clinched the fifth Central Division title in Battalion history. “If we can have the same success he had that season, I would be quite happy.”

The Battalion finished the season with six straight wins and there is no question that the North Bay fans are anxious to see playoffs in their first season back in the OHL. Butler said that it was great to see the North Bay-Sudbury rivalry rekindled again.

“We knew it was going to be a tough battle,” Butler said. “We know the rivalry between the cities and… we knew this meant a lot to the city, to North Bay, to do this.”

The Battalion now turn their attention to the Niagara IceDogs in their first round playoff match-up. Here is a look at all four Eastern Conference opening round playoff series.

The Generals claimed the Eastern Conference title with 42 wins and 90 points but limped into the post-season with wins in five of their final 10 games. Fortunately they won three of four against Mississauga this season and that should provide a confidence boost for the opening round. Veteran Scott Laughton was the leader that the Generals expected him to be while sophomore Michael Dal Colle put together an inspiring season with 39 goals and 95 points. The Steelheads edged the Belleville Bulls by one point for the final playoff spot in the East despite winning just three of their final 10 games. 19-year-old rookie Bryson Cianfrone, a third round pick in 2011, was Mississauga’s surprise scoring leader with 17 goals and 44 points this season.

Playoff History: This marks the first ever playoff meeting between these two organization.

Former first round pick Barclay Goodrow has been a consistent producer in all five of his seasons with the franchise and continued to lead the team at their new address this season with 33 goals and 67 points. The Battalion had a lot of plus players this season, including fourth year defender Marcus McIvor, who finished with a plus-30 rating. Jake Smith was the top netminder in the East with a 2.52 goals against average in 42 games. The IceDogs were fighting for their playoff lives down the stretch and clinched seventh place with a pair of wins in their final three games. Former first round pick Brendan Perlini had a breakout season with 34 goals and 71 points – a 59 point improvement over last season. They split the season series with three wins each.

Playoff history: This marks the third time in four season these two organizations have met in the post-season with the IceDogs winning 4-0 in the second round of the 2012 OHL Playoffs, also sweeping the Battalion in the first round of the 2011 OHL Playoffs.

The Frontenacs started the season on a roll and ended it in the same fashion and hope that the lessons they learned along the way will help them advance past the first round of the playoffs for the first time in 16 years. They boast an impressive crop of younger players including top draft prospect Sam Bennett, who led the team with 36 goals and 91 points. Sophomore defenceman Roland McKeown finished the season with a conference best plus-38 plus-minus rating. Former second overall pick Nick Ritchie busted out offensively in his third season, potting 39 goals and 74 points. The Frontenacs were looking to sweep the six game season series but the Petes claimed an overtime win in the finale earlier this month.

Playoff History: This is just the fourth time these two organizations have met in the first round of the OHL Playoffs and first since back-to-back seasons in 1996 and 1997 when the Petes won both matchups 4-1. The Petes also won the 1982 series 6-2 in points over the Frontenacs.

Just one year removed from a berth in the OHL Championship Series, the Colts put together another respectable season under head coach Dale Hawerchuk. They tied the Wolves with 77 points but earned home ice advantage in this series based on 37 wins to the Wolves 33. Blue chip defenceman Aaron Ekblad added offensive production to his repertoire in his third season with the Colts, finishing with 23 goals and 53 points in 58 games despite missing time while representing Canada at the World Juniors. Meanwhile veteran winger Andreas Athanasiou reached career highs with 49 goals and 95 points and is a handful on most nights. The Wolves had a terrific first half and looked to challenge the Generals for first place but went into a funk in the second half and limped to just three wins in their final 10 games of the season. Nicholas Baptiste – the Wolves first rounder in 2011 – enjoyed a big boost to his production, scoring 45 goals and 89 points to lead the Wolves in scoring this season. The Wolves won five of eight head to head match-ups with the Colts this seaon.