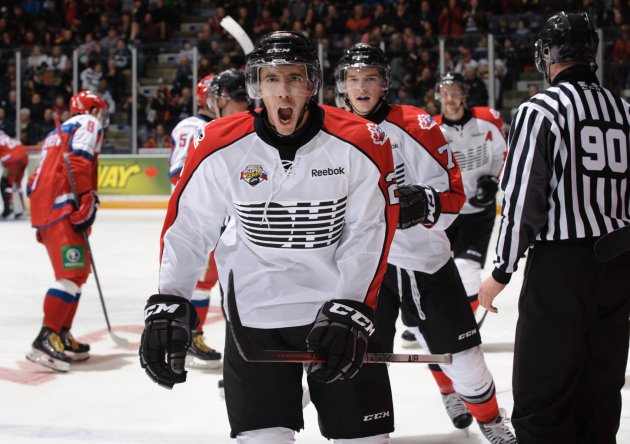 Team OHL restored their winning ways against Team Russia in SUBWAY Super Series action with a 2-1 win on Monday night before a crowd of 4,283 in Sarnia.

New York Islanders prospect Ryan Strome (Niagara IceDogs) led the offensive charge for the OHL with a goal and an assist and was named Player of the Game.

The win brings the OHL’s overall record to 19-1 against Russia in ten years of SUBWAY Super Series play with the lone loss coming last Thursday night in Guelph.

Strome’s goal came at the midway mark of the first period when he slammed home a slapshot from in close at 9:50, with Garrett Meurs (Plymouth Whalers) and Matt Puempel (Kitchener Rangers) picking up assists.

After a scoreless second period, Team OHL extended their lead to 2-0 at 9:16 of the third when Vancouver Canucks prospect Frank Corrado (Sudbury Wolves) snuck in off the point and buried a rebound in close which held as the game-winner.

Team Russia pressed late in the game and managed a single goal when former Sarnia Sting star Nail Yakupov scored in the final minute of play to the delight of the hometown crowd.

Tampa Bay Lightning prospect Andrei Vasilevski was named Player of the Game for Russia for the second time this series making 26 saves despite the loss.

The 2012 SUBWAY Super Series is now tied 2-2 (6-6 in points) with Game 5 set for Wednesday night when the WHL hosts Team Russia in Vancouver.  The game can be seen live on Sportsnet at 10:00 pm ET, as well as the NHL Network in the United States.