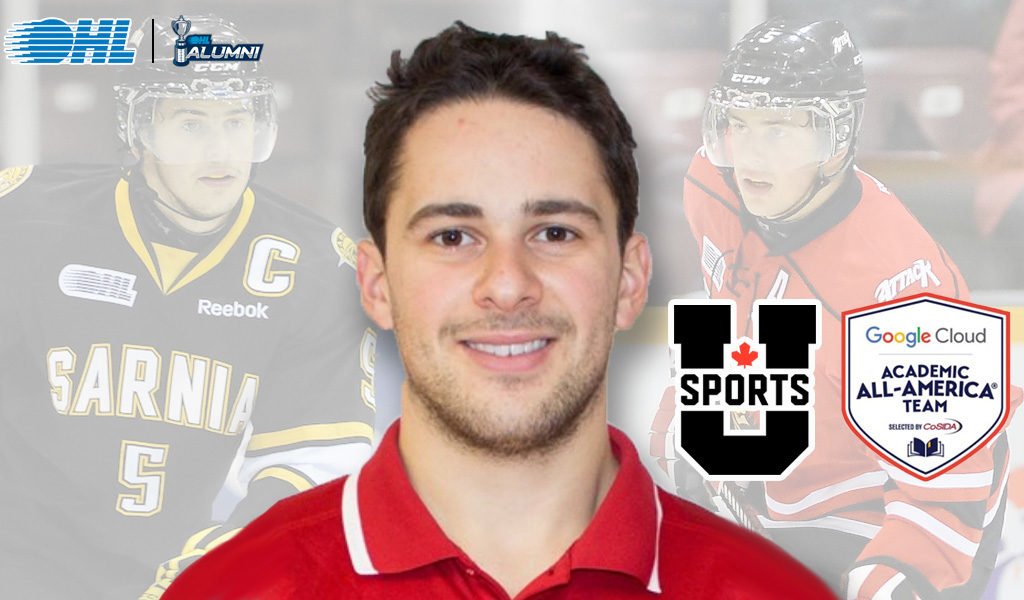 A decorated student-athlete who recently followed-up a five-year OHL career with five seasons playing U SPORTS Men’s Hockey, Owen Sound Attack graduate Nathan Chiarlitti has another outstanding accomplishment to add to his resume.

The 26-year-old master’s in exercise psychology student wrapped up his U SPORTS Men’s Hockey career with the McGill Redmen this past season and was named to the Google Cloud Academic All-America Team, a distinction awarded by the College Sports Information Directors of America. Chiarlitti is one of just six Division I or U SPORTS Men’s Hockey players to receive the honour and is just the sixth athlete in McGill history to merit the recognition.

Chiarlitti is an All-America Team member in the at large category which recognizes College students in the sports of fencing, golf, gymnastics, ice hockey, lacrosse, rifle, skiing, swimming and diving, tennis, water polo for both men and women; bowling, crew and field hockey for women; and volleyball and wrestling for men.

The 5-foot-11, 195Ib. blueliner’s latest accomplishment is added to an extensive list of achievements that also includes 2016 Dr. Randy Gregg Award honours as U SPORTS Student-Athlete of the Year won while he played at St. Francis Xavier University. He has also excelled on the ice, earning conference all-star recognition on four separate occasions while finishing his U SPORTS career with 66 points (15-51–66) in 130 regular season games from the blue line.

Chiarlitti’s additional accomplishments include being named the 2017 recipient of the Prix d’excellence Guy Lafleur awarded to the Quebec university player who best combines hockey with academic excellence and citizenship. Five months later he earned the Jean Beliveau Award, an honour given to the most outstanding student-athletes at McGill who demonstrate leadership in the community.

In addition to his on and off-ice success at the U SPORTS level, Chiarlitti has also represented Canada at the 2016 World University Games in Kazakhstan while also suiting up for the U SPORTS All-Stars against Canadian National Junior Team hopefuls leading up to the IIHF World Junior Hockey Championship.

Chiarlitti spent four OHL seasons with the Sarnia Sting before playing his overage season as a member of the Owen Sound Attack. He played in a total of 313 career regular season games, collecting 15 goals, 72 assists and 87 points along the way.

Upon completion of the 2017-18 season at McGill, Chiarlitti signed with the Sydney Ice Dogs of the Australia Ice Hockey League, racking up five goals, 11 assists and 16 points in nine games while also competing in the league’s All-Star Game.