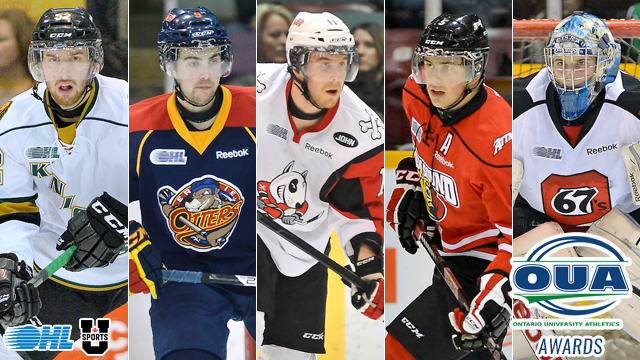 For his well-rounded efforts, defenceman Nathan Chiarlitti (Owen Sound Attack) of the McGill Redmen has been named the OUA’s 2017-18 Randy Gregg Award nominee. The fifth-year defenceman scored 16 points in 28 games and had only eight penalty minutes.

In the classroom, Chiarlitti achieved a 3.91 GPA in the second year of his master’s degree, making the Principal’s Student-athlete Honour Roll and earning Academic All-Canadian honours. The Redmen captain has served as a volunteer for a multitude of causes, including the Antigonish Minor Hockey Association, the Maritime Program of Hockey Excellence, and ParticipACTION – and those beyond athletics, including Fit 4 Life and Fit 4 Tots, a community service program which promotes healthy lifestyles to children. He has also volunteered with the Best Buddies program, which helps people with intellectual disabilities gain valuable life experiences, leadership skills and establish new friendships.

Another OHL graduate in Carleton’s Brett Welychka (Belleville Bulls) received Second Team All-Star honours. The 24-year-old from London, Ont. posted a 31-point season including 12 goals and 19 assists in 28 games. He also represented the U SPORTS All-Stars in going up against Canadian National Junior Team hopefuls in December.

The Ravens’ product wasn’t the only U SPORTS All-Star to receive recognition for his body of work this season; however, as fellow representative Spencer Abraham (Erie Otters) turned in an award-winning campaign of his own. The Queen’s Gaels captain has been named the 2017-18 Defenceman of the Year for the second time in his career (2014-15), not only proving to be a game-changer in front of the net, but also in the attacking zone to the tune of 22 helpers this season (5th in OUA).

The First-Team All-Star also shone in other facets of the game, most notably in terms of his overall demeanor, as his respect for the game and those around him have also helped make him the 2017-18 Most Sportsmanlike Award recipient; becoming just the second Gael to win the award (Brady Olsen, 2006-07).

It takes more than just one player for a team to finish second in their division; however, and in that vein, two Queen’s teammates are also being recognized with all-star selections. Forward Slater Doggett (Windsor Spitfires) has secured a First-Team nod, behind his top-five finish in goals (18) and top-ten point total (33), which also included a quartet of game-deciding goals for the Kingston squad. Goaltender Kevin Bailie (London Knights), meanwhile, has carved out a spot as a Second-Team All-Star after allowing the fifth fewest goals against (33), racking up a stout win percentage of 0.769, and finishing in the top ten in save percentage (0.920).

Oshawa Generals graduate Medric Mercier was named to both the Second Team All-Star and All-Rookie Team after playing a key role on the Ottawa Gee-Gees blue line this season.

When it comes to making an impact in multiple facets of the game, few can do it better than Alex Basso (London Knights), and for his all-around efforts, the Ryerson Rams captain has earned 2017-18 Player of the Year honours.

Basso shines bright from the blueline, anchoring the Rams defence in several ways. He is able to disrupt the opposition on a nightly basis, shutting down their top threats with the best of them, but his skillset goes well-beyond shutdown defender. The fourth-year player also finished second in the OUA in power-play markers, tallying seven on the season, en route to his 14-goal campaign. He was also a top-20 finisher in points on the year with 28, and stepped up on several occasions to register Ryerson’s game-winning goal; good in enough for second in the OUA in that category.

Basso, who is the first Ryerson player to take home the Player of the Year honours, has also been awarded the Defenceman of the Year nod and has been named to the First-Team All-Stars.

Ryerson’s recognition didn’t stop there; however, as the Rams are well-represented in this year’s all-star crop. Joining Basso on the First-Team is forward Matt Mistele (Sarnia Sting), who finished his all-star campaign with 14 goals and 33 points, the latter ranking him seventh in the conference.

Simmonds, who serves as captain for the Gryphs, registered a 32-point season – the highest output of his four year career – which included 12 goals and 20 assists (9th in OUA). His running mate put up very similar numbers in his third season, as Thompson recorded 11 goals and 22 assists (5th in OUA) for a 33-point campaign (7th in OUA). Bolstering the back-end for Guelph was fellow first-teamer McFadden, who not only remained a physical presence on the blueline, but also chipped in with 23 points of his own.

The accolades didn’t stop there for Guelph; however, as they also saw a pair of rookies claim recognition for their impressive first-year efforts. Defenceman Mathieu Henderson (Flint Firebirds) was a steady presence for the Gryphons rearguards and earned All-Rookie Team recognition.

When talking about goaltenders in the OUA, the effort that Brock netminder Clint Windsor (Ottawa 67’s) put forth cannot be understated, and his puck-stopping prowess gives him the 2017-18 Goaltender of the Year award. Backstopping the Badgers to a solid campaign, the First-Team All-Star was called upon to be a big part of the team’s 14 wins this season, earning 12 of them in his 26 starts. Windsor, while making the most saves in the conference, led the OUA in save percentage (0.930) and finished in the top-10 in goals-against average (2.51), buoying the Brock attack into a successful season and even more triumphant playoff push.

And when looking deeper at the Badgers’ success this season, the role of head coach Marty Williamson cannot be ignored, and his leadership behind the bench has him named the 2017-18 Coach of the Year.

Williamson led the Badgers to a four-point improvement from a season ago, and much of this success comes from the team’s play in their own zone. Under the guidance of the former Niagara IceDogs head coach, the Badgers were able to rank second in the OUA in goals allowed and operated at a fifth-ranked 84.8% on the penalty kill. Williamson’s guidance secured Brock a fifth-place finish in the division, but they have parlayed that into a Queen’s Cup final run.

The Brock coach becomes just the third in Badgers history to earn the award, following in the footsteps of multi-time winners Murray Nystrom and Mike Pelino.

Another individual who made an impact off the ice – in addition to his in-game stature – is York Lions’ rearguard Shayne Rover (Niagara IceDogs). Having now completed his fifth season, the Lions veteran put up a career-high 17 points on the year, but his impact goes well beyond the scoresheet. His on-ice demeanor, presence, and respect for all those around him have earned Rover the Most Sportsmanlike Award, while his additional efforts in the classroom and the larger community have made him the 2017-18 recipient of the Randy Gregg Award.

The Academic All-Canadian is completing his second degree, graduating with a Bachelor of Education this year, and has taken time to extend his reach to roles such as the sport clubs representative with York’s Athletics and Recreation department and volunteer coach at local high schools in hockey, football, and rugby. The all-time leader for York in regular season games played has left his mark on the club and is a deserving recipient for this year’s Award of Merit.

An additional three schools also find themselves represented on the Second-Team. For Toronto, the Varsity Blues see the likes of forward Matt Campagna (Plymouth Whalers), whose selection is anchored by his 25-point (8 G, 17 A) output. Laurier’s Brandon Robinson (Kitchener Rangers) earned a Second-Team nod after his 23-point performance (9 G, 14, A) for the Golden Hawks, while Waterloo Warriors’ standout defenceman Mike Moffatt (Kingston Frontenacs) rounds out the talented crew.

Completing the All-Rookie Team, meanwhile, is Western’s Cordell James (Owen Sound Attack), who put home a tidy 19-points in his freshman campaign, scoring nine goals (three of which went for game-winners) and adding 10 assists for the purple ponies.

The complete list of the major award winners and all-stars can be found below: