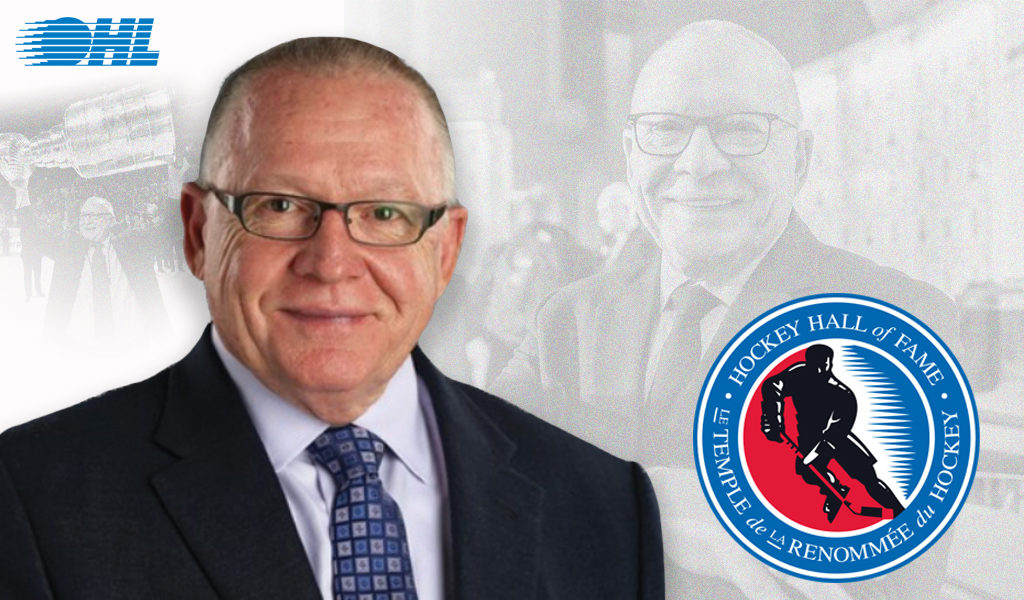 The Hockey Hall of Fame rolled out the red carpet for its class of 2019 on Monday, capping-off a memorable induction weekend honouring the game’s greats.

Three-time Stanley Cup champion and memorable GM Jim Rutherford has officially made his way into the @HockeyHallFame. #HHOF2019 pic.twitter.com/Qbys8CMCdl

A three-time Stanley Cup champion, former OHL champion, and 1969 Memorial Cup champion, Rutherford did great things in the game at just 5-foot-8, something he highlighted in his emotional speech given on Monday night.

“Don’t let anyone tell you ya can’t do something because that was the story of my career,” he said, “and the more they told me I couldn’t do things, the more it turned out, I did.”

A small town Ontario boy, Rutherford recounted the small beginnings that launched what would be become an immensely successful hockey career both on and off the ice.

“I pulled on my first pair of skates when I was five years old in Beeton, about 60 miles north of here,” Rutherford said to open his speech. “I never could have imagined coming here one day to be inducted into the Hockey Hall of Fame.

“My family lived paycheck to paycheck,” he continued. “But they always found a way to get me equipment and they took me to every game and every practice.”

Congratulations on your induction into the @HockeyHallFame, Jim! You owned the crease for Team 🇨🇦 in the late 1970s, but it’s your outstanding tenure as a general manager that has earned you recognition as a builder. #HHOF2019 | #HHOF pic.twitter.com/rlrURcAoDT

A netminder with the OHA’s Hamilton Red Wings from 1967-69, Rutherford joined the Montreal Jr. Canadiens for the 1969 Memorial Cup to sweep the Regina Pats 4-0 in a best-of-seven series. He then embarked on a 13-year NHL playing career spent largely with the Detroit Red Wings before retiring in 1983.

Rutherford’s hockey hiatus was a brief one as he quickly joined forces with Peter Karmanos and the Compuware Sports Corporation, a multi-tiered organization that included leagues for youngsters all the way up to Junior ‘A’.  He became general manager of the Windsor Compuware Spitfires upon Karmanos’ acquisition of the franchise in 1984-85. Rutherford’s time in Windsor culminated in an OHL Championship in 1987-88 with a team that included Adam Graves, brothers Darryl and Darrin Shannon as well as Peter DeBoer.

Rutherford’s next pursuit saw him join with Karmanos once again, this time establishing an expansion franchise in Detroit to begin the 1990-91 season. Rutherford served as president and general manager of the Detroit Compuware Ambassadors, a franchise rebranded as the Detroit Jr. Red Wings in 1992-93. He won back-to-back OHL Executive of the Year honours in 1993 and 1994 before making the jump to the NHL’s Hartford Whalers in 1994-95. That same season the Jr. Red Wings team he helped build would hoist the Robertson Cup under the leadership of Paul Maurice.

Rutherford recently embarked on his 26th NHL season in the front office, spending the first three in Hartford before a 17-year run with the Carolina Hurricanes that yielded a Stanley Cup title in 2006. He has served as general manager of the Pittsburgh Penguins for the past six campaigns, winning back-to-back championships in 2016 and 2017.

For more on the decorated career of Jim Rutherford, visit the Hockey Hall of Fame website.