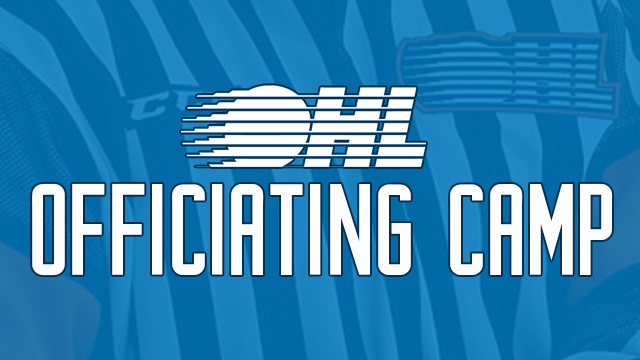 The Ontario Hockey League held its annual pre-season Officiating Camp in Markham, Ont. this past weekend, welcoming 89 officials to a two-day seminar in advance of exhibition play.

A total of 64 OHL officials were joined by 25 officiating prospects at the Edward Village Hotel in Markham, Ont. for instruction surrounding new rule implementation for the 2019-20 season including the expansion of video review league-wide. Off-ice physical evaluations were held at the Angus Glen Community Centre while on-ice testing took place at the Crosby Community Centre in nearby Unionville, Ont.

A highlight of the annual Officiating Camp is the presentation of “The Bodie” Character Award for Officials with the 2019 honour received by linesman Geoff Rutherford (Windsor, Ont.).

“Geoff is most deserving of this award,” said OHL Director of Officiating Conrad Haché. “He is not only an 18-year veteran as an OHL official, he is also highly regarded by his peers with a keen desire on seeing his team succeed night in and night out. After 18 years in the OHL, it’s refreshing to see Geoff continue to bring his dedication, his commitment and his desire to every assignment he works.”

To date, Rutherford has skated over 650 regular season games and over 110 playoff games. He has worked an OHL All-Star Game, two CIBC Canada Russia Series Games, a CHL/NHL Top Prospects Game and officiated the 2017 Memorial Cup Presented by Kia in his hometown of Windsor, Ont.

Established in 2013, “The Bodie” is presented annually to the OHL official who demonstrates a passion and dedication to officiating and the game of hockey, who best exemplifies leadership on and off the ice, professionalism, and is respected by OHL member teams, players, and fellow officials.  The award is named in recognition of former OHL Senior Officiating Manager, Ken Bodendistel, who served 40 years in the league beginning as a Supervisor in 1974-75.  Bodendistel passed away in November, 2013, at the age of 73 after a courageous battle with cancer.

The League would also like to recognize linesmen Raymond King (Erie, Penn.) and Scott Wilson (Ottawa, Ont.) who both embark on milestone seasons. King prepares for his 15th in the Ontario Hockey League while Wilson hits the ice for his 10th.

The OHL also congratulates a pair of former players who spent the 2018-19 season as OHL officials. Referee Dan Kelly, formerly of the Kitchener Rangers and linesman Kyle Flemington, formerly of the London Knights, Sarnia Sting and Saginaw Spirit, have both signed officiating contracts with the National Hockey League.