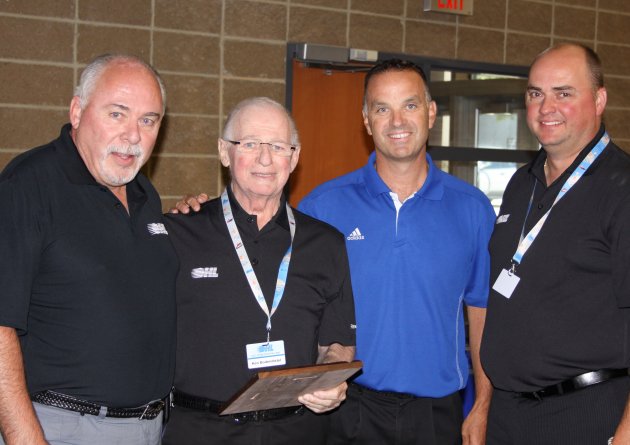 Toronto, ON – The Ontario Hockey League Board of Governors at its recent Annual Meeting established a new award for league on-ice officials and in so doing chose to recognize OHL Senior Officiating Manager, Ken Bodendistel.

“The Bodie” is presented annually to the OHL official who demonstrates a passion and dedication to officiating and the game of hockey, who best exemplifies leadership on and off the ice, professionalism, and is respected by OHL member teams, players, and fellow officials alike.

The new award was introduced at the annual pre-season OHL Officiating Camp held this past weekend, August 23-24, 2013, at the University of Guelph.

In making the announcement, OHL Commissioner David Branch stated, “Ken Bodendistel has been a builder of the Ontario Hockey League and his contributions in the area of the development of our league, particularly in the area of his leadership, management and growth of our on-ice officials cannot be overstated and is unmatched.  It is fitting that such an award be named in Ken’s honour.”

The 2012-13 season marked Bodendistel’s 39th straight year of OHL service off the ice in an administrative role.  Beginning as a Supervisor in 1974-75, Bodendistel’s career also included a 12-year term as the league’s Director of Officiating from 1982-94 and most recently serving as Senior Officiating Manager for the past five seasons.  He began his officiating career in the 1960’s skating in the OHA and OHA Jr. A through 1968-69 before he was signed by the NHL.  Bodendistel worked professionally for two seasons in the NHL, WHL, and CHL before returning to referee OHA Jr. A for his final three seasons from 1971-72 to 1973-74.

Also announced at the OHL Officiating Camp was the inaugural recipient of “The Bodie”, presented to referee Scott Oakman.  Oakman, from Mount Albert, ON, is entering his 15th season as a member of the OHL’s Officiating Staff.  Last season he was assigned to the Rogers OHL Championship Series for the first time in his career.

Nominations for “The Bodie” will be made by OHL officials and reviewed by a Selection Committee comprised of the league’s Supervisory staff and Director of Officiating.  The award will be presented annually in August at the Officiating Camp.

A total of 90 officials attended the OHL’s pre-season Officiating Camp at the University of Guelph including 18 prospective OHL officials with a total of 37 referees and 53 linesmen.  The camp included fitness evaluations, skating sessions, rule and video seminars, and team building activities.