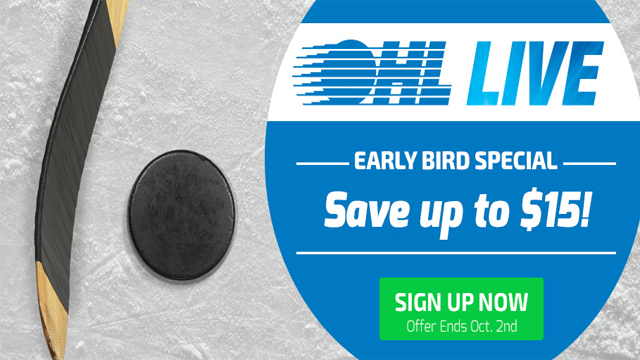 The Ontario Hockey League, in association with its digital media partner NeuLion, are proud to offer Early Bird pricing for OHL Live up until October 2, 2016.

Powered by NeuLion, OHL Live provides coverage of all 20 teams in the OHL and will deliver all 680 games throughout the regular season which opens Wednesday, September 21, as well as coverage throughout the 2017 OHL Playoffs.

The OHL and NeuLion continue to offer a wide range of package options to suit the needs of all OHL fans. Early Bird pricing provides the best value for subscribers and is available now until October 2.

In addition to single games, subscription offers also include the 5-Game Pack and the 10-Game Pack to provide the ultimate in choice for any OHL fan!

*All prices in Canadian dollars

OHL fans will continue to enjoy the enhanced OHL Live platform launched in the 2014-15 season. The enhanced OHL Live platform gives viewers the opportunity to watch up to four games at once with picture-in-picture and quad-view options along with the ability to choose between the home or away audio feed. OHL Live is also available for the iPhone, iPad, Android Smartphone, and Android Tablet through the OHL Live app.

Fans can still take advantage of the live support chat option, accessible directly from the OHL Live site, which instantly connects viewers to a customer support team member to resolve any issues.