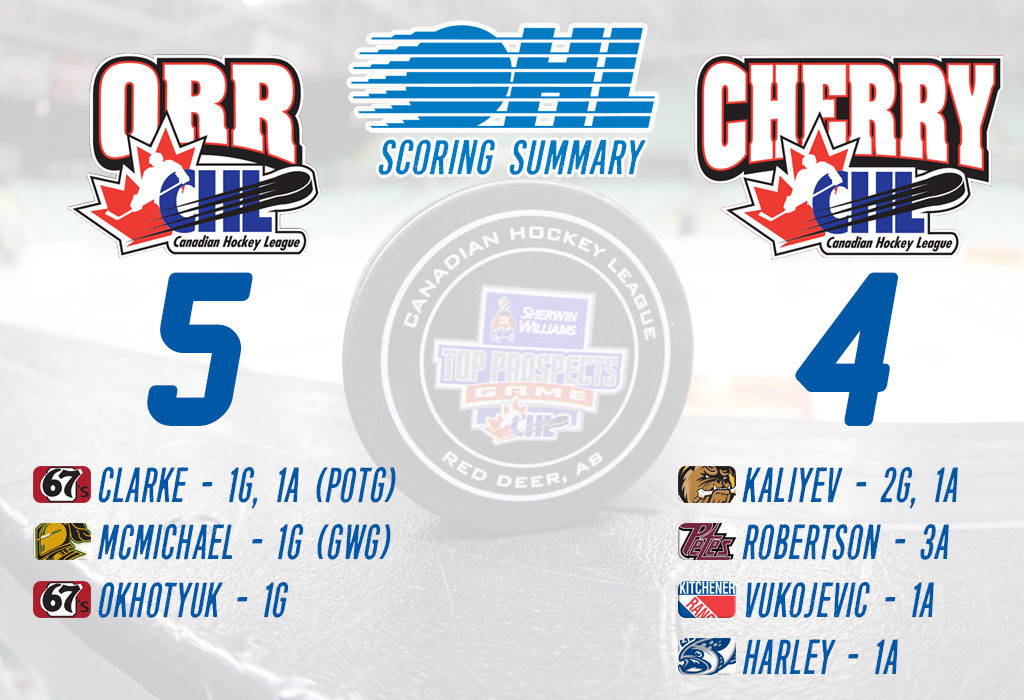 The biggest comeback in Sherwin-Williams CHL/NHL Top Prospects Game history saw Team Orr score four third period goals to recover from a 4-1 deficit and hoist the Bobby Orr and Don Cherry Trophy before a crowd of 5,432 at Red Deer’s Centrium.

Clarke earned Jim Gregory Player of the Game honours for Team Orr, scoring a highlight reel goal before assisting on the game winner.

Here’s a look at the OHL’s top performers from a memorable night in Central Alberta on Wednesday.

GRAEME CLARKE (OTTAWA 67’s):
Long-known for his talent and ability to score highlight reel goals, Graeme Clarke brought his best on Wednesday, maneuvering around an opposing defenceman before tucking a forehand deke past Mads Sogaard (Medicine Hat Tigers) to put Team Orr on the board. The Ottawa, Ont. native has 15 goals for his hometown 67’s so far this season, a figure he’ll look to increase for the East Division leaders down the stretch. Clarke gives Team Orr a Player of the Game recipient for a second-straight year after fellow 67’s player Kevin Bahl earned the honours last year in Guelph.

CONNOR McMICHAEL (LONDON KNIGHTS):
While Clarke took home Player of the Game honours, Connor McMichael will always be remembered for the big goal. The 18-year-old beat Team Cherry netminder Taylor Gauthier (Prince George Cougars) over the shoulder for the game winner, giving Team Orr three goals in a span of 1:12. The 28th ranked North American skater by NHL Central Scouting, McMichael’s strong performance on Wednesday also included a 10-for-14 night in the faceoff circle as he skated alongside Clarke and fellow London Knight Matvey Guskov.

Fourth unanswered Team Orr goal and third in 1:12 is the dagger 🚨@con91mcmichael of @GoLondonKnights shows he is in fact a “skilled forward with good vision, instincts, smart and patient with the puck yet quick to be able to take advantage of opportunity.”#SWTP 🎥 pic.twitter.com/MWTMTGtsWZ

NIKITA OKHOTYUK (OTTAWA 67’s):
He just scored his first goal of the OHL season last weekend, warming him up for the big stage as defenceman Nikita Okhotyuk brought Team Orr within a goal with his third period point wrister on Wednesday. The Russian rearguard got himself noticed early, throwing some punishing body checks in the opening shifts of the game. Okhotyuk finished with a plus-2 rating and spent the night paired alongside fellow OHL defender Vladislav Kolyachonok (Flint Firebirds).

HUNTER JONES (PETERBOROUGH PETES):
His team got off to a slow start in front of him, but Peterborough Petes netminder Hunter Jones held Team Orr in the game until they got their legs under them late in the first period. Team Cherry outshot Team Orr 7-1 early on as Jones surrendered a pair of goals inside the first 12 minutes of action. The Brantford, Ont. native calmed things down moving forward, going on to stop 18 of the 20 shots he faced before a large gathering of NHL scouts. The 6-foot-4 goaltender returns to Peterborough where he’ll continue to be a workhorse in the crease.

#OHL goaltender @ShutoutsJones of @PetesOHLhockey has earned his place at #SWTP as the 2nd ranked North American #NHLDraft prospect in the crease 🎥 pic.twitter.com/gqf4Gxbcxf

ARTHUR KALIYEV (HAMILTON BULLDOGS):
It didn’t take long for scoring sensation Arthur Kaliyev to find the scoresheet on Wednesday. One half of Team Cherry’s American connection set a new event record with his goal 56 seconds into regulation on an assist from fellow U.S. standout Nick Robertson (Peterborough Petes). The two would connect again early in the third period for Kaliyev’s second of the night. The former OHL champion also added an assist in the loss as he played alongside Robertson and Team Cherry Player of the Game Peyton Krebs (Kootenay ICE).

“Excellent scorer with elite offensive hockey sense – very smart at getting in position for a quality scoring chance.”

NICK ROBERTSON (PETERBOROUGH PETES):
With speed and great vision, Peterborough Petes forward Nick Robertson turned heads in Red Deer. The Northville, Mich. native set up linemate Arthur Kaliyev (Hamilton Bulldogs) with a back hand feed entering the zone inside the opening minute of the game before later threading a needle to a waiting Peyton Krebs (Kootenay ICE) on the power play. Unfortunately for Robertson, Team Cherry came up short in this one but the 17-year-old had a chance to show-off his electrifying skill set before a national audience on Sportsnet.