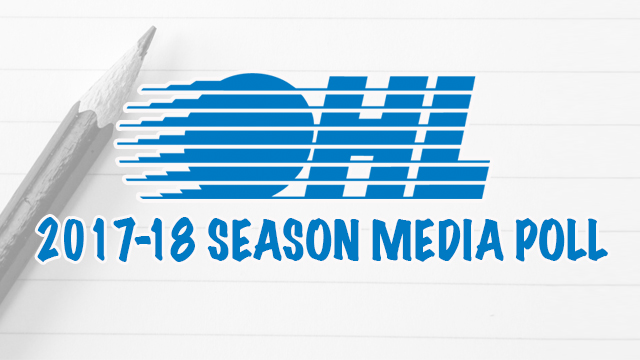 Pre-Season is the best time for prognosticating.

As we get set for #OHLOpeningWeek puck drop, a poll of various media who cover the league in broadcast booths and press boxes weighed in with opinions and comments on some of the players and teams primed to shine in 2017-18.

Who will win the Midwest Division?

“Dale DeGray is masterful at running this small market program.  His teams are perennial contenders in a traditionally strong division.”

Who will win the West Division?

“Loaded with returning talent, the Greyhounds have seamlessly transitioned from the Kyle Dubas/Sheldon Keefe era into the Kyle Raftis/Drew Bannister era.”

Who will win the East Division?

“A good nucleus back from last year with a solid group of forwards, and Dylan Wells returns to the Petes’ goal looking to become one of the top goaltenders in the OHL.”

Who will win the Central Division?

“Assuming everyone eligible returns, doubt they stumble out of the gate like last year.”

“Svechnikov and Lipanov will be exciting to watch.”

Which player will be the league’s Top Scorer?

“Poised for a monster year, Suzuki is a great talent on a great team.”

Who will be the league’s Best Goaltender?

“DiPietro is a proven winner who battles relentlessly and will build off his stellar play in the Mastercard Memorial Cup.”

Who will be the league’s Best Defenceman?

“The best two-way defenceman coming back was fifth in scoring from the blue line last year and was a remarkable +53.  What can he do for an encore?”

Who will be the league’s Top Rookie?

“He’ll go around you, through you, and can score from anywhere inside the blue line. The hype is real with this dynamic Russian forward.”

“Bannister’s Greyhounds look like they’ll be a dangerous offensive team once again, and if the former defenceman can get the blue line playing shutdown hockey he could be a great candidate for this award.”

Who will be the league’s Top Prospect for the 2018 NHL Draft?

“Tabbed for the last two seasons to be a top five pick in the 2018 NHL Draft, playing for Dale Hawerchuk can only strengthen that belief.”

Who will be the league’s Most Outstanding Player of the Year?

Who will win the Wayne Gretzky Trophy as Western Conference Champions?

“Top to bottom they are a deep team looking to build on what they started last season.  Even without Michael McNiven the Attack can beat teams in so many ways.”

Who will win the Bobby Orr Trophy as Eastern Conference Champions?

“Another year of maturity for the McLeod brothers and a deep defensive group make this team very dangerous in the Eastern Conference.”

Who will win the J. Ross Robertson Cup as OHL Champions?

“All eyes are on the Attack this year. No surprises. No underdog. They’re expected to win.”

”Mississauga in my mind is the most complete team in the OHL top to bottom. Their experience last season getting to the OHL Finals will only help them capture the championship this season.”