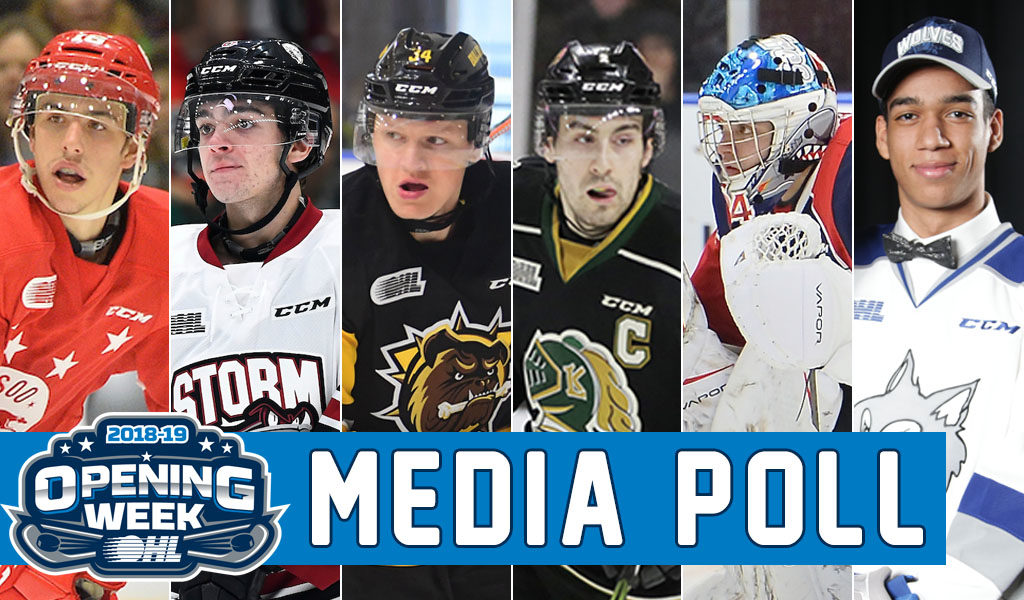 There’s no better time to file predictions than Pre-Season.

With the launch of #OHLOpeningWeek, a poll of various media who cover the league in broadcast booths and press boxes provides opinions and analysis on some of the players and teams to watch in 2018-19.

“The Knights should have a strong goalie and good group on the backend with a flashy bunch of young scorers up front.”

“A tough division once again with a lot of quality teams. It will depend who gets players back from NHL camps.”

“A team that might be a year away from peaking, but arguably the best overall defence in the Western Conference.”

“I don’t think the Greyhounds are ready to hand over the reins. Hayton and Frost will keep this team rolling, even if they do take a step back from their record-breaking season last year.”

“Gens and 67’s will battle it out atop East all season long, but Oshawa has edge in goal a deep roster that is itching to make a long playoff run.”

“Ottawa was young last season but developed quickly under Andre Tourigny. They have plenty of responsible forwards who can score, and their defence is one of the most exciting to watch in the OHL. If they can get the goaltending the 67’s will lead the East Division.”

“The IceDogs edge out the Barrie Colts for the Central Division and Akil Thomas proves he should have went in the first round of the NHL Draft.”

“The Colts always find ways to be competitive and quietly added some star power once again in the Import Draft.”

“With the growth of returning players along with their 2002 OHL Draft and CHL Import Draft class they will be a playoff team.”

Which player will lead the league in scoring?

“His game has grown tremendously over the last two seasons and that will continue this season.”

“If he’s returned to Owen Sound, Nick Suzuki will tear up the OHL this season with his sweet hands and off the chart smarts.”

Who will be the league’s best goaltender?

“There’s DiPietro then there’s everyone else. He’s in a league of his own. A true difference maker who wins games on his own.”

Who will be the league’s best defenceman?

“A two-way tour de force. Was the leading scorer among blue liners last season and is just as strong in his own end.”

“A truly dynamic defender. Hopefully a taste of the game at the next level will instill the importance of a more rounded defensive presence required to play pro hockey.”

Who will be the league’s top rookie?

“The OHL’s first pick overall is a true towering force on the ice and already turned heads with his play in Pre-Season recording nine points in five games. He’s ready to play a leading role in Sudbury and all at the tender age of 16.”

“He’s the real deal. In his Pre-Season debut he didn’t even know any of his teammates but looked very comfortable and knew where to be on the ice to take advantage of his tools. At 16 already has a pro shot.”

“Spirit appear ready to take a big step and Smith has experience and patience to get the best out of a talented young team.”

“Hunter’s influence can never be underestimated when given a talented team.”

Who will be the league’s top prospect for the 2019 NHL Draft?

“Can’t wait to see how he follows an outstanding rookie season given every opportunity to play big minutes in Hamilton.”

“Former first overall pick has an uncanny ability to find his teammates on the ice and is as talented a playmaker as there is in the OHL.”

Who will be the league’s most outstanding player of the year?

“Philadelphia Flyers prospect was in contention for the major hardware last season. If Hounds contend, he’ll be the main reason.”

“The west is fairly open this year, but the Knights will be tough to beat if they get all their NHL prospects back.”

“The Dogs have built toward this season and it appears they’re set to go all in. Having Stephen Dhillon behind a strong team makes them the team to beat in the Eastern Conference.”

“Bouchard and Boqvist will be a force on back end and Knights always seem to find a way to add pieces that put them over the top.”

“Jones, Thomas, Maksimov and Lodnia lead talented forward group, while tandem of Dhillon and Incze in goal may be best in OHL. Dogs have some serious bite to them.”