OHL Media Poll: Picks and predictions for the coming season 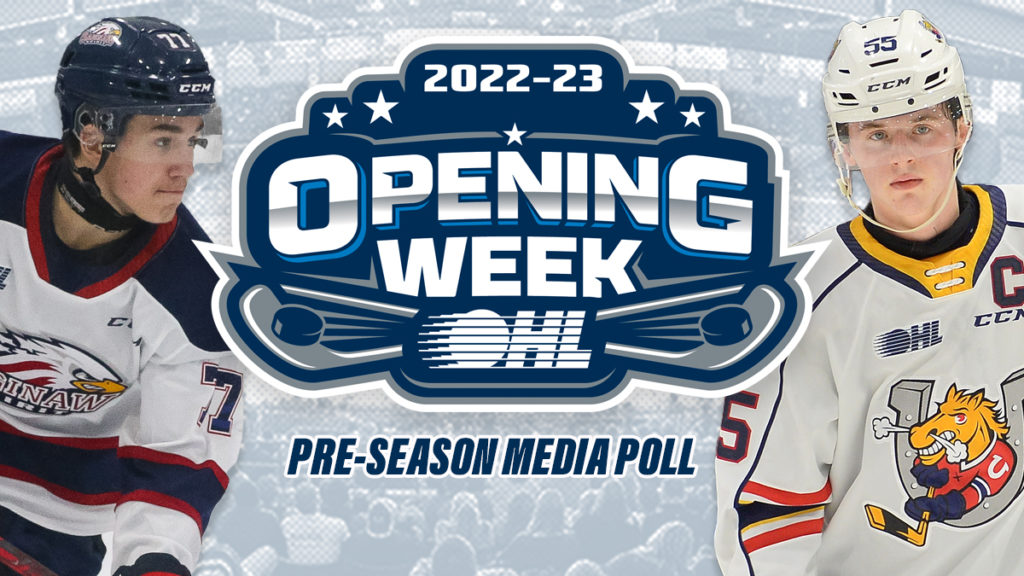 With the launch of #OHLOpeningWeek, a poll of various media who cover the League in broadcast booths and press boxes provides opinions and analysis on some of the players and teams to watch in 2022-23.

“The Midwest is going to be a dog fight, and I think Guelph’s blend of depth and experience will serve them well.”

“By my count, the Firebirds are returning the most goals scored from a year ago, a great sign for success in the OHL. This team is going to score so much that I’m not concerned about whether Will Cranley turns out to be a top-tier goaltender in the league.”

“A deep offensive group got even better with the addition of Connor Lockhart. Petes are in go-mode.”

“Goaltending is a bit of a question mark out of the gate but the rest of the team checks all the boxes with a dependable captain in Del Mastro, one of the League’s top goal-scorers in Hardie, some dynamic talent up front in Beck and Del Bel Belluz and a coach who has proven he can get the most out of his players in James Richmond.”

“They were really young last season, but with guys like Goyette, Musty, Delic and Konyen all a year older, you could see multiple players take big steps in their development all at the same time.”

Which player will lead the League in scoring?

“His shot is just incredible. I think he’ll be surrounded by guys who are going to find him, and he’s proven that he isn’t just a one-dimensional scorer either, he can make plays and distribute the puck as well.”

Who will be the League’s best goaltender?

“He’s still looking for a pro contract. I’m interested to see what his workload looks like but if he’s able to stay healthy all year then you have to think he’ll be in this conversation.”

Who will be the League’s best defenceman?

“I think that it’s all but guaranteed that he gets a few games with Los Angeles to start the year and that means a delayed start to his OHL season. I do think he will be back at some point and when he does return, he should be a dominating force.”

Who will be the League’s top rookie?

“Saginaw’s first overall pick and the OHL’s latest exceptional status player is tremendously gifted and while it’ll be an adjustment playing against older, bigger opponents, the diminutive forward has always found a way to make an impact.”

“Last year’s runner-up for Coach of the Year has a great team to work with, one he was able to maximize last season to help the Firebirds reach the Conference Finals for the first time ever.”

Who will be the League’s top prospect for the 2022 NHL Draft?

“For as outstanding as this year’s NHL Draft is, it lacks high-end defensive talent. Insert Cam Allen, who I believe can be the first defender off the board. He doesn’t really have a weakness in his game and I expect him to challenge for the Max Kaminsky this season.”

Who will be the League’s most outstanding player of the year?

“The success that Othmann saw at the World Juniors over the summer when taking his physicality to new levels will see him bring some of that back to the OHL. Players play different roles in that tournament, but if Othmann adds that high-end physicality to his elite-level scoring in the OHL, it will be bad news for the rest of the League.”

“This is a tough one, but I give an edge to Guelph on this because of the two mobile young guys they have on the back end – a commodity not many teams in this League possess.”

“Lots would need to go right for them in terms of players returning, but I think it happens and everything comes together for them. Brandt Clarke has a monster year, Ethan Cardwell has a monster year, their younger players take that step forward, and they make a few big deadline deals to push them over the top.”

“It feels like just yesterday that they hoisted the trophy in 2019, but through some great drafting and work by general manager George Burnett and his team, the Storm are ready to challenge for OHL supremacy once again.”