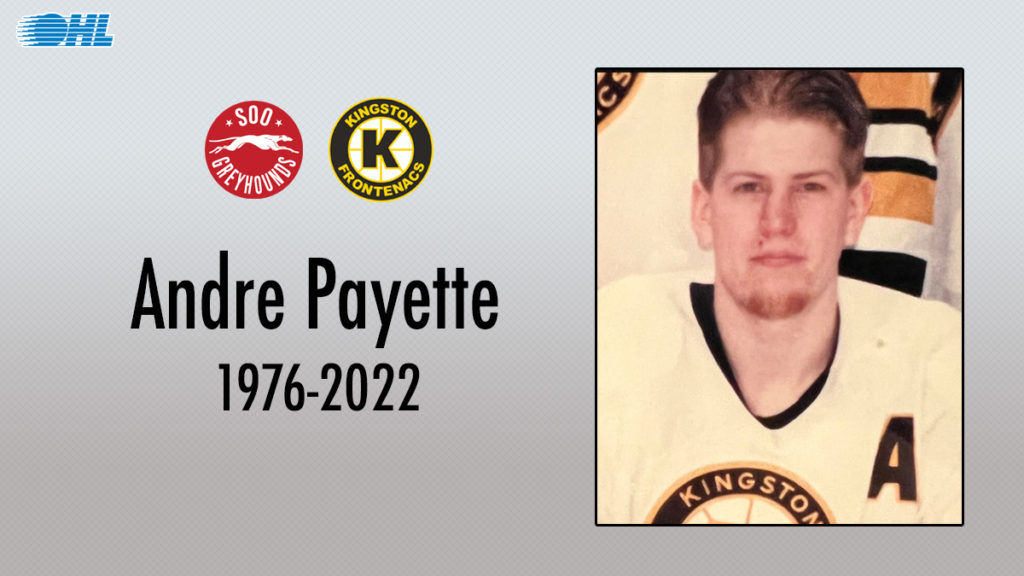 The Ontario Hockey League is saddened by news of the loss of former Soo Greyhounds and Kingston Frontenacs forward Andre Payette who passed away last week at the age of 46.

Originally from Ottawa, Ont., Payette was a sturdily-built left-winger who spent four seasons in the OHL from 1993-97. Selected by Sault Ste. Marie in the 12th round of the 1993 OHL Priority Selection, he made the jump to the OHL and, after scoring two goals in his rookie season, lit the lamp at least 13 times in each of the ensuing three campaigns. A physical presence, he was chosen by the Philadelphia Flyers in the 10th round of the 1994 NHL Draft and hoisted the Calder Cup in his first year of pro hockey as a member of the Philadelphia Phantoms in 1998.

After six seasons spent largely in the American Hockey League, Payette moved overseas where he became a popular figure in the British hockey ranks. He helped the Coventry Blaze win an EIHL championship and Grand Slam victory in his first season abroad before spending the next four seasons as a member of the Newcastle Vipers. Payette would also enjoy stints with the Manchester Phoenix and Sheffield Steeldogs, bringing an imposing presence while also managing to find the scoresheet at a regular clip. He served as a player-coach throughout his time in Sheffield.

Following retirement in 2017, Payette moved into a management role with the Hull Pirates of the NIHL. He eventually moved back to Canada where he resided in Ottawa, coaching the game at various levels.

The League’s thoughts are with his son Oliver, and the rest of Andre’s family and friends at this difficult time.

For more on the career of Andre Payette, visit The Star.