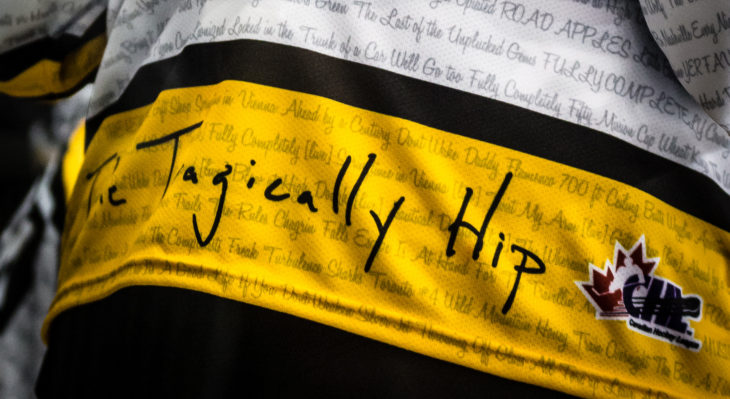 The Ontario Hockey League community joins the rest of Canada with heavy hearts following the passing of Mr. Gord Downie, a great Canadian artist who loved our country, the great game of hockey, and whose strength and determination was so inspirational for all Canadians from coast to coast.

Downie died Tuesday night “with his beloved children and family close by,” the band said in a statement on its website Wednesday morning.

In the wake of his diagnosis with glioblastoma — an incurable form of cancer — the musician became a symbol of perseverance in the face of his mortality.

In January, 2017, the Kingston Frontenacs honoured The Tragically Hip with specially designed jerseys for their hometown rock icons.  The game worn jerseys produced net proceeds of over $73,000 representing a CHL online jersey auction record all in support of the Gord Downie Fund for Brain Cancer Research through Sunnybrook Hospital in Toronto.

Our sincere condolences to the Downie family and to the members of Gord’s iconic Canadian band, The Tragically Hip.

Kingston Whig-Standard’s Mike Norris – He Was Such A Poet