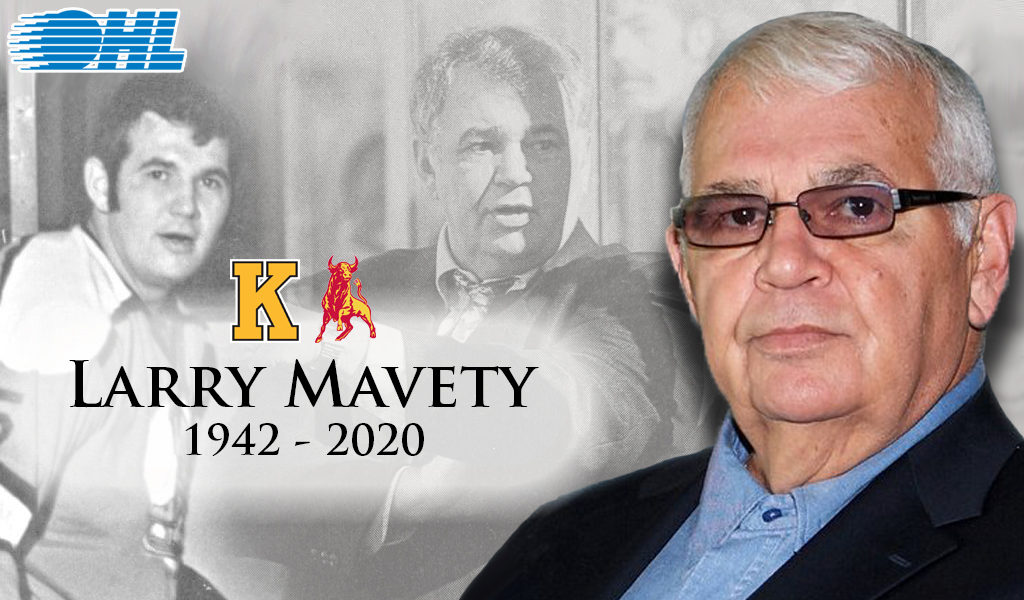 The Ontario Hockey League family is deeply saddened by the loss of one of the game’s great coaches and OHL builders. Long-time former Kingston Frontenacs and Belleville Bulls head coach and general manager Larry Mavety has passed away at the age of 78, leaving behind a legacy in the game of hockey that touched countless players, staff and fans.

“I’ve had the privilege of working with Mav for over 30 years,” said OHL Commissioner David Branch. “There are many things that he contributed to our game, but most importantly what stands out in my mind is how he took care of his players.

“The OHL and its teams are greatly indebted to certain individuals that have contributed to our League, and Larry Mavety is one of those people. He will be deeply missed and our heartfelt condolences are expressed to his wife Brenda along with his children, step-children and many grandchildren.”

The sixth-winningest coach in OHL history, ‘Mav’ was a fixture both behind the bench and in a managerial capacity with the Bulls and Frontenacs over a span of 31 seasons from Belleville’s inaugural OHL season in 1981-82 to his assuming an advisory role with the Frontenacs in 2011-12. Mavety accumulated an all-time OHL coaching record of 681-715-101-17 over 24 seasons behind the bench, coaching 1,514 contests, the fourth-highest total in League history behind Brian Kilrea, Bert Templeton and Stan Butler. He remains the winningest coach in both Frontenacs/Raiders (246) and Bulls (435) franchise histories.

It’s with great sorrow that we share the news of the sudden passing of our dear friend, Larry “Mav” Mavety. The Kingston Frontenacs send our love and support to the entire Mavety family.

Larry leaves behind a legacy in Kingston and the Ontario Hockey League.

Some of Mavety’s most prominent career achievements include being presented the Bill Long Award for Distinguished Service to the OHL in August of 2018, recognizing his more than three decades of contributions to the League. He was the OHL’s Coach of the Year in 1990 after guiding the Frontenacs to a 42-21-3 record. Mavety steered the Belleville Bulls to an appearance in the 1986 OHL Championship Series, one they’d lose to the eventual Memorial Cup champion Guelph Platers in six games. He was inducted into the Belleville Sports Hall of Fame in 1992.

Originally a native of Woodstock, Ont., Mavety enjoyed a lengthy playing career, getting his start in a city that would later springboard him into coaching. A defenceman, Mavety suited up for the Belleville McFarlands Jr. B club in 1960-61 before joining the OHA’s St. Catharines Teepees for a brief look that same season. He’d go on to play a 15-year professional career with stops all over the map, most notably competing in 248 career WHA contests spent between Los Angeles, Philadelphia, Chicago, Toronto, Denver and Indianapolis. Unsurprisingly, Mavety always had an abundance of great stories to tell documenting his journey through the game.

Larry Mavety will be forever remembered as one of the OHL’s great builders and prominent head coaches, overseeing the development of some of the game’s top performers through their junior careers. The League extends thoughts and condolences to Larry’s wife Brenda, along with his family and many friends accumulated through a lifetime in the game of hockey. He will be greatly missed.

In keeping with Mav’s wishes cremation has taken place. There will be no visitation or service. Those who wish can make a donation to the Kingston Area Minor Hockey Association, so more kids can play and learn the game of hockey or to the Kingston Humane Society.

The hockey world has lost a great man. Mav was my coach, my GM and a friend. Condolences to Brenda and family. Thanks for giving me a chance. Larry Mavety you will be missed. RIP pic.twitter.com/il9Q8We6oh