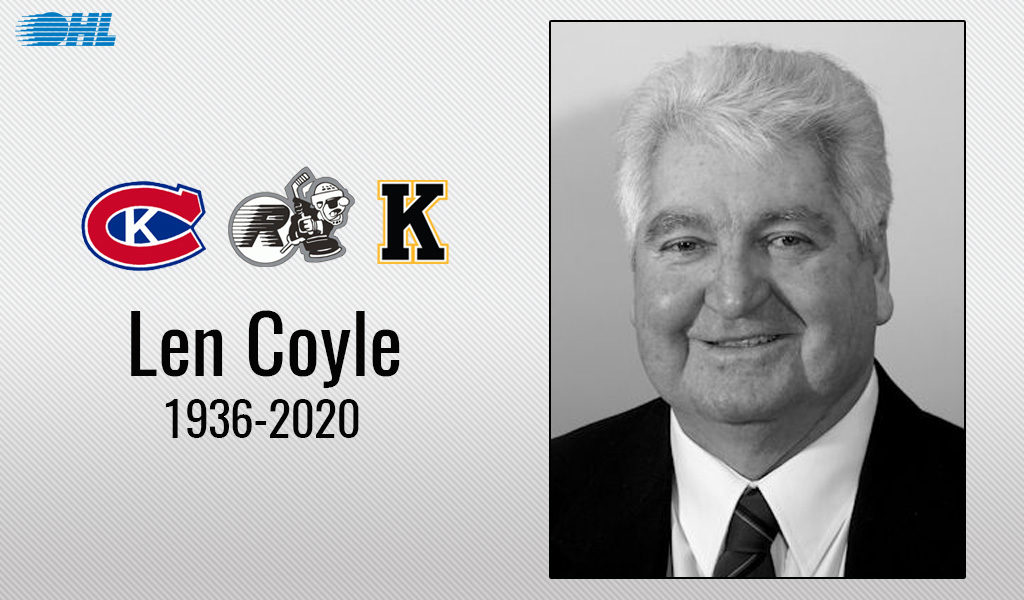 The Ontario Hockey League is saddened by the loss of former long-time Kingston Canadians, Raiders and Frontenacs trainer Len Coyle, a fixture on the Kingston sports scene who has passed away at the age of 84.

A 2009 inductee into the Kingston & District Sports Hall of Fame, Coyle is well-known throughout the city for his dedicated service to both the Frontenacs as well as the Queen’s Gaels football program where he served as a statistician and official scorer from 1955 to 2016. He had attended nearly every Queen’s home football game since 1947.

Prior to retirement, Coyle made a living as an electrician. He started out with the Kingston Canadians franchise in their inaugural season (1973-74) and leaves behind his wife Frieda, who recently served as the Frontenacs’ media room hostess from 1989 to 2019.

Having grown up in Kingston, Coyle was a player-manager of the Kingston Merchants when they won the Ontario Hockey Association intermediate A championship in 1967-68. He officiated Kingston’s annual Historic Hockey series for over 30 consecutive years dating back to its inception in 1975.

The OHL extends thoughts and condolences to the Coyle family along with Len’s many friends throughout the Kingston sporting community at this most difficult time.

It is with heavy hearts that we report the passing of our dear friend, Len Coyle.

Our condolences and thoughts are with the Coyle and Horton family. pic.twitter.com/6ZJlPNcN1H