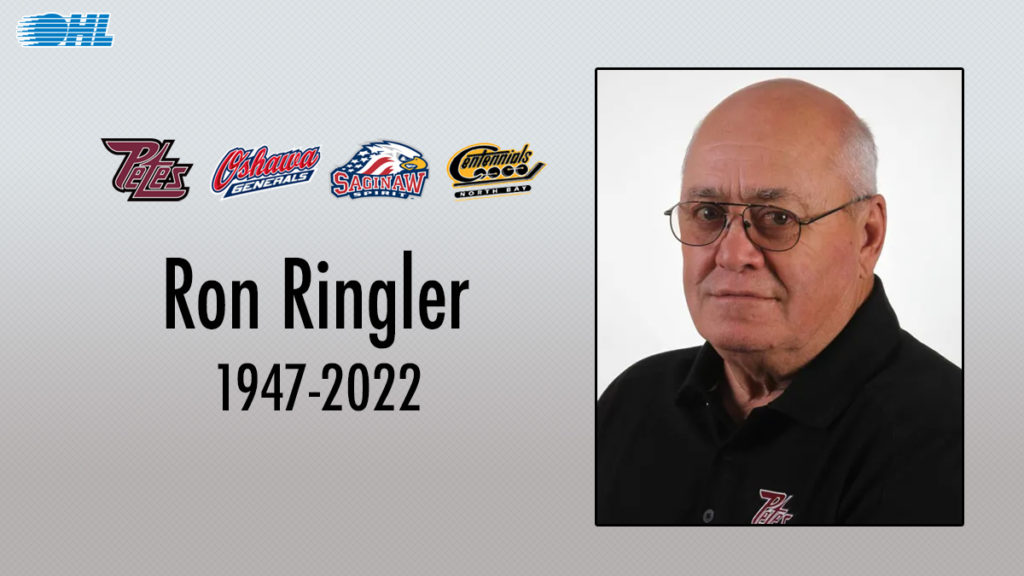 The Ontario Hockey League and the entire Peterborough Petes organization is saddened to announce the passing of Ron Ringler, the team’s Northern Ontario Scout. Ringler, born on June 20, 1947, resided in Powassan, ON with his wife Linda. He was 75.

The North Bay native has served on the Petes scouting staff since the 2010-11 season. Prior to that, he was a scout with the Oshawa Generals, Saginaw Spirit and served as a scout and then assistant coach for the North Bay Centennials from 1998 to 2001.

Ringler also played for the Petes, suiting up under Roger Neilson as one of the team’s leading scorers during the 1967-68 season.

“It is a sad day for the Petes organization, losing someone who has done so much for the team throughout our history. You would be hard-pressed to find anyone in the junior hockey community who wasn’t impacted by Ron’s dedication to the game,” commented Petes General Manager, Michael Oke. “Ring was a valued member of our organization and a great man. He will be missed by the entire OHL and hockey community. Our deepest sympathies go out to Ron’s wife Linda, son’s Peter and James and their families, and all of Ron’s family and friends across the province and around the world.”

The League and the Petes would like to extend our sincerest condolences to the entire Ringler family, Ron’s past and present teammates and colleagues, his friends, and members of the many hockey and non-hockey communities to which he contributed. The Petes will commemorate Ringler’s life during the opening ceremonies of their Home Opener on Thursday, September 29 at the Peterborough Memorial Centre.