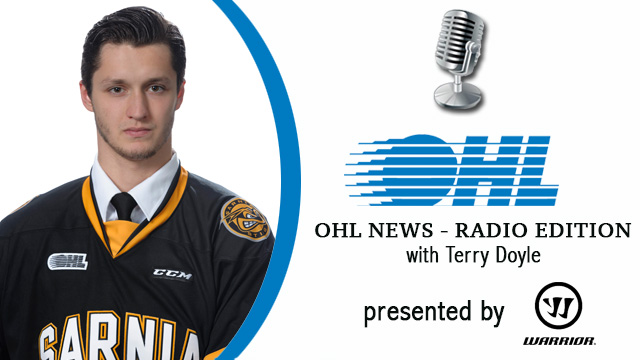 OHL News – Radio Edition with host Terry Doyle and presented by Warrior returns for the 2016-17 regular season bringing fans insight from feature guests as well as news and notes from around the league each and every week over the airwaves.

This week’s segment features Toronto Maple Leafs prospect Nikita Korostelev of the Sarnia Sting who has been dazzling fans with highlight reel goals since returning from NHL Training Camp.

The 19-year-old Moscow native is playing in his fourth career OHL season.  Heading into this week’s 3-in-3 Korostelev had eight goals and three assists for 11 points in five games after a 2015-16 campaign where he produced 23 goals and 19 assists for 42 points in 53 games.  The Leafs selected Korostelev in the seventh round of the 2015 NHL Draft.