OHL ‘On the Run’ Player of the Week: Aaron Luchuk 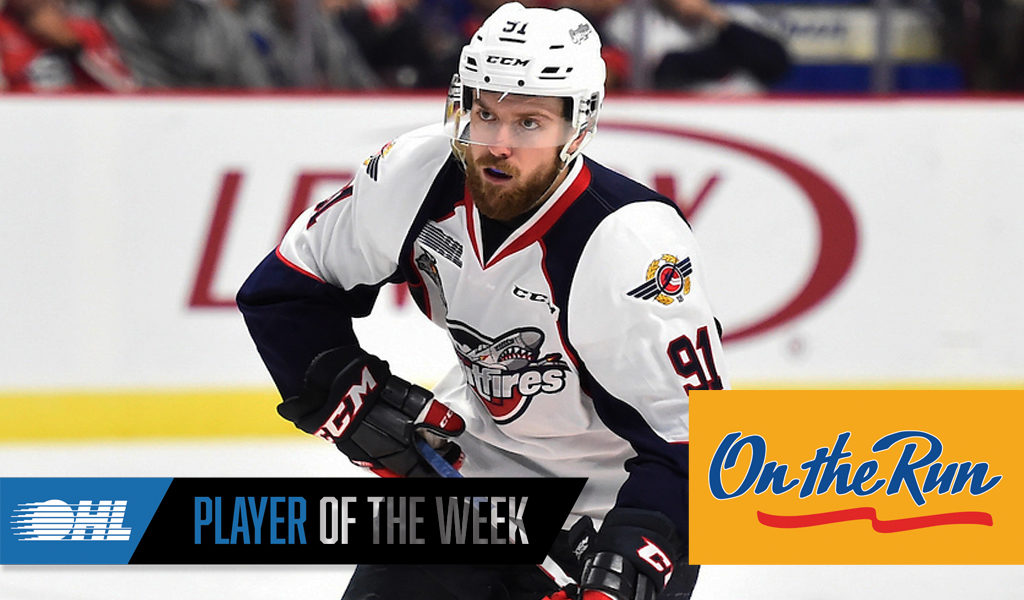 Toronto, ON – The Ontario Hockey League today announced that forward Aaron Luchuk of the Windsor Spitfires is the OHL ‘On the Run’ Player of the Week for the week ending October 29 with nine points in three games including four goals and five assists with a plus-minus rating of plus-2.

Luchuk recorded a pair of multi-point performances last week elevating him into a tie atop the OHL’s overall scoring race while taking over the league lead in goals and helping the Spitfires earn a pair of road victories.  After a tough 4-0 loss to the North Bay Battalion on Thursday, Luchuk and the Spitfires rebounded Friday in Sudbury where the team produced a season-high seven goals including three from the captain in the 7-2 win over the Wolves.  This marked the first career hat-trick for Luchuk who also contributed two assists for a career-high five-points earning first star honours.  Luchuk was also named first star of Sunday’s contest finding the back of the net for the 15th time this season while adding three assists in a 5-4 triumph over the Owen Sound Attack.

WATCH THIS: ??? alert for @aaron_luchuk_19!@SpitsHockey captain delivers best game of his career with 5️⃣PTS including 1st career hatty. pic.twitter.com/j2y1TLBllV

A 20-year-old from Kingston, Ont., Luchuk is playing in his fourth full season with the Spitfires who chose him in the fourth round of the 2013 OHL Priority Selection.  The overage forward was named team captain to start the 2017-18 campaign after helping the club capture their third Mastercard Memorial Cup title scoring the game-winning goal on home ice last May.  His 28 points in 15 games so far this season bring his offensive totals to 163 points in 221 career games and are currently tied with last week’s award recipient Jordan Kyrou of the Sarnia Sting for the league lead.  Luchuk is the second member of the Spitfires to earn the weekly honour following goaltender Michael DiPietro who was recognized for his opening week play.

Watch video highlights of Luchuk and the Spitfires against the Wolves and Attack.

Kyrou was also considered for the award again this week after scoring four goals and two assists for six points in two games helping the Sting extend their winning-streak to 13.  Fellow St. Louis Blues prospect Robert Thomas of the London Knights finished the week right behind Luchuk in points with seven including four goals and three assists in three games as another candidate for recognition.  In goal, 2018 NHL Draft prospect Jacob Ingham backstopped the Mississauga Steelheads to three straight wins stopping 78 shots and posting a goals-against-average of 1.32 and save percentage of .951.